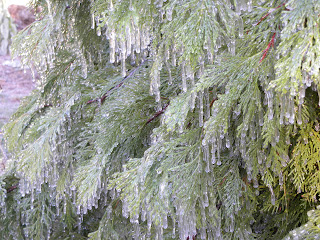 It is going to be cold today.  Okay, not cold for most of you, but cold for me.  Paul came in the bedroom this morning, getting ready for his internship which starts today at the local courthouse, and began looking for a shirt with long sleeves.  Internally I thought "long sleeves?  You're going to boil later on!" but then I went downstairs and saw the gloom and remembered that I'd heard the snow level would be dropping to 4500 feet this week.  From 90-something degrees on Friday to it-might-snow on Monday or Tuesday.  We aren't in Florida anymore.

I've been enjoying the dry heat.  It's just not as unbearably hot as it used to be, after 10 months of truly unbearable heat and humidity.  We'll see how I do in the "cold" (I think it's supposed to get up to 70 today... I know, 90% of you think that's pretty warm... It's only in Florida that the weather casters start joking about mittens and hats when it falls much below 80 degrees).

Mae Bae's fox stolen shoe still hasn't been recovered.  We did see the culprit, who we'll call "Swiper," hanging around outside with a handful of deer yesterday afternoon.  Since he's not a whole lot larger than a house cat, he's not particularly intimidating.  Unless your a shoe sitting outside the front door. 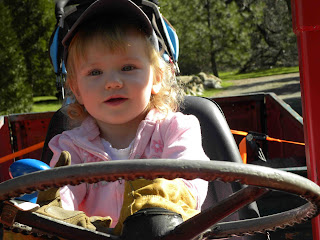 So far the biggest challenge is to keep Mae from running at a sprint out into the star thistle.  There are plenty of paths and deer trails to walk on around here, but Mae likes to make her own way, to wherever it is she thinks she's going.  And wherever she's going is usually straight in the direction of the river, so everyone, including her sister, is keeping a close eye on her.  When she went a few steps off the main road the other day Sadie started to shout and when I grabbed her hand Sadie relaxed and said:  "Mommy you saved her life!"

Sadie's taken to heart that we can point out places on the walk where rattlesnakes have been spotted (and where G.G. once made short work of one with only a rock and his walking canes, when it was near the house), and she's quick to remind us whenever Mae does anything she shouldn't be doing that: "When I was a baby I used to do that too..."