"Nothing Has Changed" When It Feels That Everything Has... 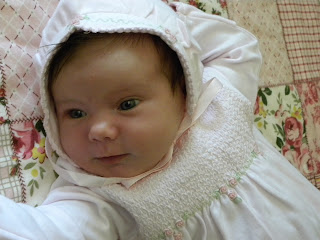 My brain has been slowly chugging along these last few days, and of course, at the moment, it's hard for me to think of anything other than the big looming change that feels as if it has rolled across our lives. So while I do plan on writing about faith and recipes and crafts and all the things I normally write about again soon, I'm sure there's going to be a period when much of what I'm processing and thinking about all the time, is what's going on here with Mae.

I know I've gotten questions about the signs along the way, because people are curious about how I was sort of blindsided by this, and this post might answer that in a round about way.  But really it's mostly train of consciousness... and so... here we go.

The most frequent comment, which I know is absolutely given with good intentions and meant to be comforting, that I've received since we got Mae's diagnosis is that I need to remember that she's the same little girl and that nothing has actually changed. 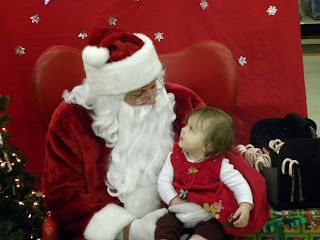 And I'll admit that my response to this each time I read it is a) feeling guilty because I know what's meant and that it's advice given lovingly, followed by b) a stomach twisting, knee jerk reaction that says "yes to a, no to b."

What I mean to say is that yes, I absolutely know she's the same little girl.  She's my heart.  She's one of the most amazing people I've ever met, with her exuberance and energy, her love and passion for life, and of course, her fearlessness.  I cannot put into words all that Mae is to our family.  She's amazing and exasperating, often at the same time. 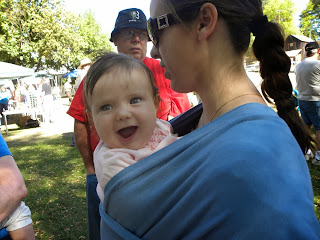 You see (and this might explain the other questions that have come up, since I've described the things we noticed as "quirks") I just assumed we were smack dab in the middle of the terrible twos.  Especially dramatic twos.  Twos that started at eighteen months and had now dragged on into the threes.  After all, two year olds are pretty wild.  They can be climbers.  They have tantrums.  The list could go on and on and I could explain any behavior as "just being two."

I kept waiting for the wildness to ebb.  For the twos to give way to something calmer.  I was waiting for her to begin to have a concept of danger.  There's a picture that I have of me and the kids that I've used a lot on the blog. It was taken while we were out in California and we're looking at the raging river that goes by my parents' house and Mae is on her leash and after the picture was taken I looked down and she had bent to take off her shoes because she was ready to jump off the cliff into the water below.

She's fearless, we'd say.  It's like she doesn't feel pain.  At first we'd shake our heads and those words would feel like a joke, because surely she felt pain, but more and more of late I began to seriously wonder.

When that swing slammed into her throwing her across the playground and she bounced up laughing it really began to sink in.  That blow should have hurt.  I ran to her thinking we were going to be calling 911.

And she smiled up at me, not feeling a thing (in retrospect I probably would have taken her to the ER if I'd realized at that point that she really wasn't feeling pain... but at the time we still were just recognizing the puzzle pieces and hadn't yet begun putting them together).

After the doctor suggested that she was on the spectrum I checked out Doctor Sear's book on Autism and after reading through the symptoms my mind reeled.  I had this stereotype in my head before this all began.  When my kids made eye contact when they were babies I figured they weren't on the spectrum, because that's what they tell parents to look for, right?  Sure Mae can ignore the whole world for hours, but she also laughs and stares into my eyes and laughs some more. 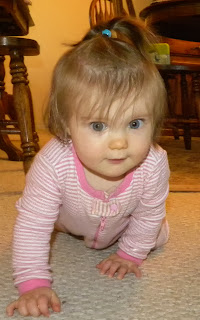 While Sadie was at swim lessons a few weeks ago I sat down and made a list of things that I was now discovering weren't normal for a three year old.

Jumping on the bed for four hours. Not feeling pain.  Her clear sensory issues.  The teeth grinding that had me begging her to take her binkie back.  Repeated motions, like sitting and stroking my hand over and over again for hours.  The list went on and on.  I wanted to write it all down before we met with the counselor and she asked what I was worried about an my mind went blank with the overwhelmingness of it all.

How could I have missed so much?  Well.  That basic desire for everything to be "okay" can rule out quite a bit.  Oh I know, we're going to be okay, a new okay, a new good even... but still it's easy to gloss things over when you really, really don't want anything to be "wrong."

The diagnosis came, with a roller coaster of emotions from being glad we'll be able to find ways to help her (like the knowledge to eliminate foods that I'm finding really effect her), to being frightened any time I look towards the future, to an ache in my chest that just comes and goes. 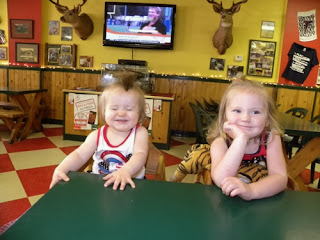 In a way it's a great blessing.  Since even the possibility of the diagnosis appeared on the horizon, and I was presented with the idea of knowing that her brain works differently, my patience has been greatly extended.  I can tell myself now that she's not just being obstinate when she's in a mood.  And that goes a long, long way.

But to say nothing has changed does not fit with the reality I'm now facing.  A lot has changed.  I'm no longer clinging to the delusion that the "twos" are suddenly going to fall away and leave me with a totally different, tantrum-less, kid who suddenly realizes that deep water is dangerous, that traffic can kill you and that you can't run in front of that swinging child because you could get seriously hurt.

I've been waiting for the age to arrive when she wouldn't just run and run and run without looking back at me, always laughing when I catch her, but never worried that I might not.  I'd been holding my breath for eighteen months, waiting for this stage to end, for it to get easier, for her to begin to listen and recognize danger and now I realize that I don't know when that will happen, but that it might not be soon.

I don't feel like this is a tragedy, and I hope I'm not making it sound that way in my rambling.  But I do feel like life has drastically changed and like I haven't quite gotten my feet back under me.

I feel extremely blessed to have been given this sweet little girl.  And sometimes, I feel a little overwhelmed by the weight of the responsibility of guarding her from harm, and I worry about the future before pushing those worries away with a prayer.

So we move forward knowing that God will give us the strength to face whatever comes and that his blessings in this life are often found in the unexpected... and by praying that we are able to accept those blessings gladly, with open arms, when they arrive.
Posted by Cammie Diane at 9:26 AM