As I write this post a certain not yet ten month old is attempting to eat the apple off the back of my computer.  So kid, actual food is disgusting and the sight of it makes you gag, but this little light up apple looks scrumptious enough to be a first food? 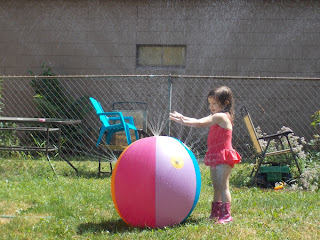 It's 8 o'clock in the morning and the toddler insanity has already reached a fever pitch.  And can you guess what it involved?

If you guessed "red boots" you are absolutely right.  Here's what happened:

Two days ago Maggie got up on the couch, laid down next to me with her feet facing me and starting kicking.  I'm pretty sure that my kidney was involved.  I pointed out that being kicked with those boots was particularly unpleasant and told her to stop.  She did it again, a little bit more softly.  I said, "If you kick me with those boots one more time I'm going to take them off and they're going to disappear, for a long, long time."

She looked at me as if evaluating and then hoped that I was bluffing.

She took her little foot and kicked me as gently as she possibly could.  A test of sorts I guess.

So I wrestled off the red super hero boots that she'd been wearing, with the exception of baths for like five days and nights, and took them upstairs and put them in my closet while she screamed about the unfairness of the world.

This morning she came up to me, wearing a pair of pink boots and handed me her sisters' brand new sneakers (Sadie outgrew every pair of shoes she owned except her ballet slippers) and said "boots on."  "Those aren't boots" I pointed out "and they're your sister's."  "Boots on!  Boots on!" she replied.  "How about I get your red boots?"  I said.  She looked excited, so I went upstairs and got them. 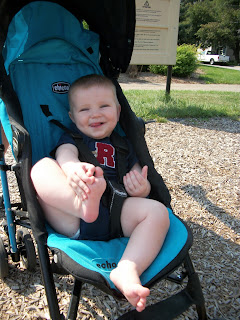 I mentioned earlier that Paul had come up with the nickname "Boomer" for Patrick and that Sadie had announced that she hated it and wouldn't be using it.  Until yesterday when we had this conversation:

Sadie:  "Is that a picture of me on Saint Therese's feast day?
Me:  "I don't know.  Is it?"
Sadie:  "Yes.  It is.  And that was when Patrick was booming around being a Boomer in your tummy."

Then on the walk home yesterday:

Sadie:  "Once upon a time there was a Boomer and he went boom, boom, boom, which made him happy because he was already booming around."

I think it's safe to say that the nickname has grown on her.

If you've seen Patrick you know how perfectly the description fits the way he moved around the house like a little bumbling baby bear getting into everything and tagging along after his sisters.

Earlier in the week I came up with this recipe for gluten free chocolate chip cookies and shared it on facebook (although now I realize that I forgot to add that 1/2 tsp salt... and the chocolate chips... I was over enthusiastic about my flour combo...):

Combine dry ingredients. Add eggs, butter and vanilla and mix on low until combined. Scoop onto a parchment paper lined baking sheet. Pat down into cookie shape (I found that they weren't spreading out quite like a normal cookie and used the bottom of a glass to shape mine). Bake at 350 for 12 minutes or until golden brown.

If you have left over dough roll it in parchment paper and refrigerate.  Slice to make cookies later!

The recipe was a huge hit and honestly, I couldn't tell they were gluten free (and I haven't thought that very often!).

So on Wednesday I was a little sad because the cookies were gone.  And I decided to take the new recipe and give it a new twist.  They were also a huge hit.  Here's the second recipe:


Combine dry ingredients. Add eggs, butter, vanilla and maple syrup and mix on low until combined. Scoop onto a parchment paper lined baking sheet. Pat down into cookie shape.  Bake at 350 for 12 minutes or until golden brown.

Paul likes the chocolate chip the best, I prefer the oatmeal and Sadie says "I like the cookies!"

Maggie cries when the cookies go in the oven because the ten to twelve minute wait just about kills her.  Then she cries more then they come out of the oven and she has to wait for them to be cool enough not to burn anybody.  It's just so hard to be three!

Patrick seems to have given up a nap.  He's started taking a three hour nap in the morning and then no nap in the afternoon.  But he actually seems to be doing well with it, and since the girls aren't taking naps it's not like I'm losing a nap time, so I'm okay with it and not trying to convince him that he really, really should still be taking two!


For more Quick Takes, visit Conversion Diary!
Posted by Cammie Diane at 9:19 AM