On Friday the internet stopped working and Paul finally got it up and running again last night and so my post is a little bit late.

As an update on the whole health situation, more headaches have held off and so I'm just dizzy with a horrible ear ache and some ringing in the ears.  Tomorrow I go back to the ENT though, and hopefully he'll have some thoughts on what's going on.

And in other Quick Take related news, Sadie saw me working on the picture for tonight's heading and said "You turned him into a gentleman, a superhero and a shield!"

Now on to the actual Quick Takes!


Patch had his first speech therapy session this week.


I had been keeping a list of words and phrases that he can say and when I said "Oh I know one I forgot to write down... cupcake.  He can say cupcake." he practically stood up in his high chair and shouted "CUPCAKE!!!!!  CUPCAKE!!!!!" over and over again. 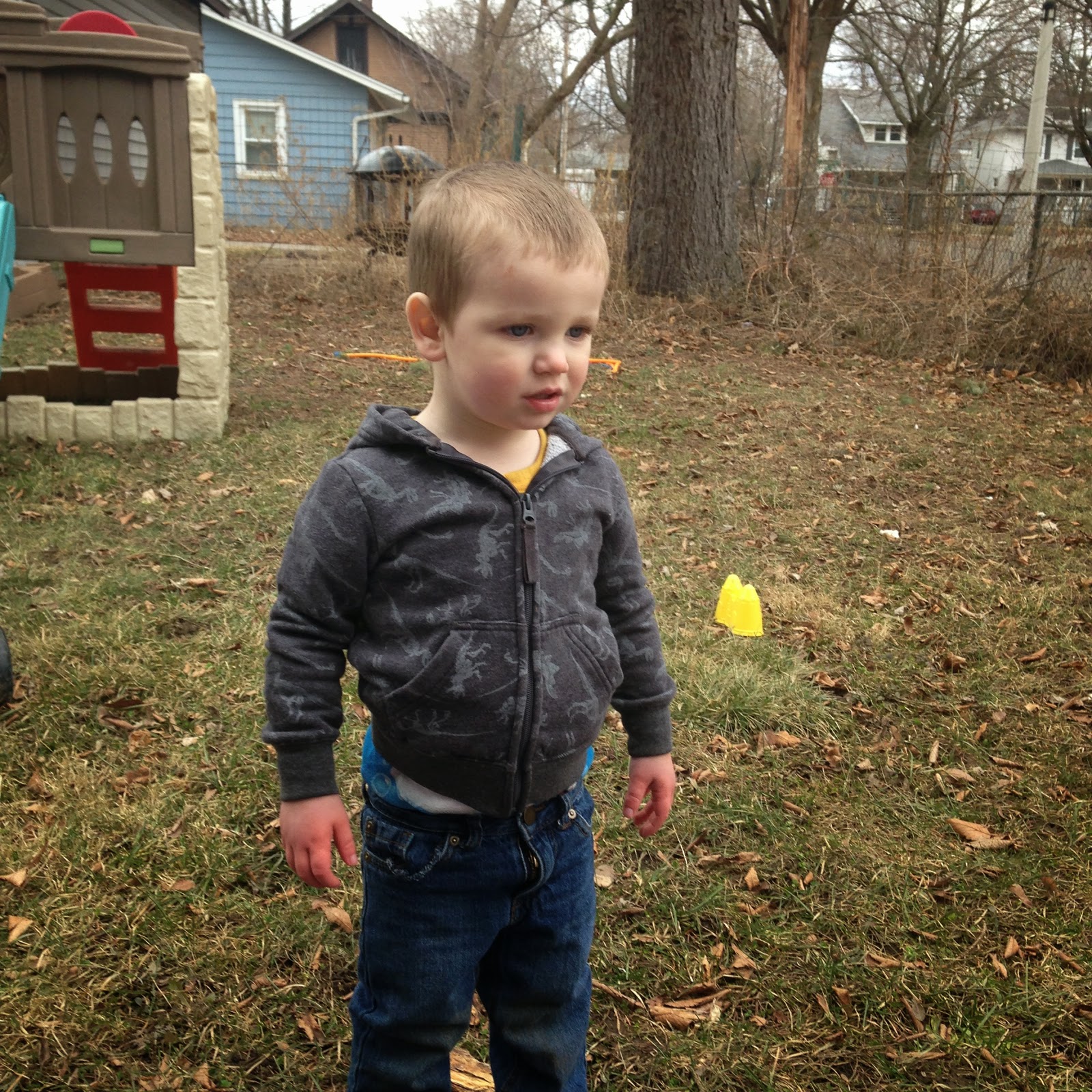 Also I'm pretty sure that they don't think he has a speech delay at all and that the reason that I was worried had more to do with my good old right ear not working... which makes sense.  And has me wondering how long it's been going on.

In other Patch related news I'll steal this status update from my personal Facebook page because it pretty much captures what happened while he was supposed to be upstairs taking a nap a couple of days ago: 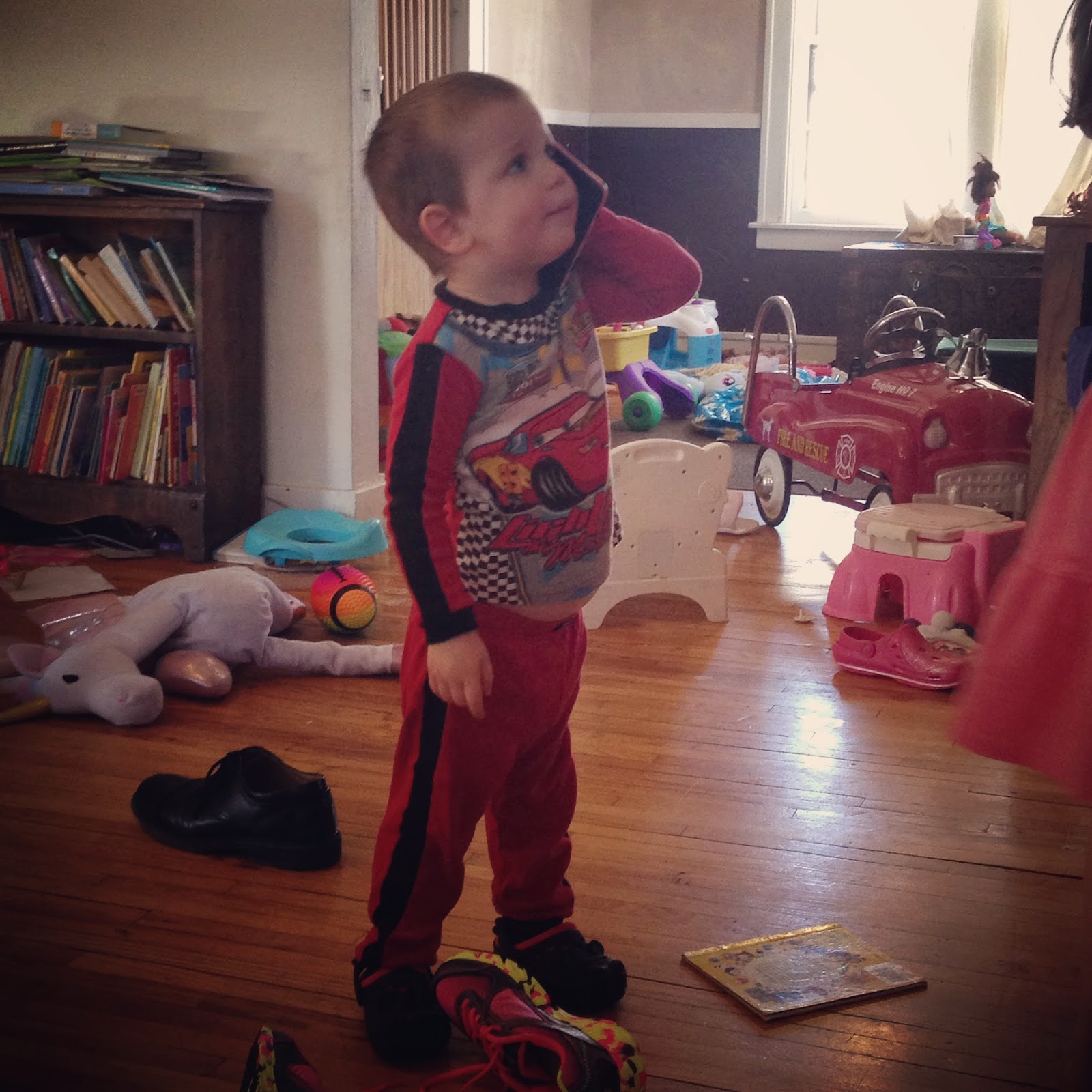 After Patch somehow bypassed the password on the Kindle and bought not one but two episodes of Bubble Guppies before I could get upstairs to stop him:
Me: "Patch. You bought an episode of Bubble Guppies?"
Patch: "Yup."
Me: "You're not supposed to."
Patch: "No."


I have no idea how he managed to do it. He's constantly swiping electronics and somehow getting past passwords.

In this case I believe he had to get past my Amazon Prime pin to become the proud owner of one new Bubble Guppies movie and a 24 hours episode rental.  That child.  He's not even two and a half yet and he's already more adept at navigating electronics than anyone else in the house.

And since I started writing this post we had another incident that involved me calling Amazon and getting them to credit back the $29.99 that he spent on a season of Paw Patrol (a show that he's never seen).  I also am about 80% sure that he's officially locked out of purchasing.  I say 80% because I was pretty sure before that he couldn't purchase anything and three purchases later I'm considerably less confident.

We also had this conversation:

Me: "So that was pretty naughty.  You're not supposed to buy things on Amazon."
Patch:  "I know."

He's also started removing all the outlet covers from outlets.  Two is proving to be an interesting age.

With Paul's 3-job work schedule and our one car household I realized that the only way I could get everyone to all their various appointments was to have Maggie to in to the therapy center two days a week.  And so I called and explained what was going on and the amazing scheduler at the office managed to find space for Maggie and her therapists to do sessions there twice a week (because they're bursting at the seams too).

And Maggie loves it.  When I told her earlier in the week that it was a learning center day she started leading me over to the door and putting my hand on the door knob.

Her Monday therapist also told me that there's another little girl her age who was doing a lesson in the playroom where she went around and identified furniture and that when Mae saw what they were doing she ran alongside her and identified each piece of furniture with her.


Maggie's also apparently such a huge fan of the playroom that she gets her work done super fast so that she can earn five tokens to go back and play more.

This is kind of hard for me to imagine because Mae was already a really fast worker (it's hard for her everyone to keep up with her a lot of the time).  But apparently as soon as she gets back to her own little area she runs over and grabs five tokens and sits down to do her work super fast so she can go play more.

Last night I did major shoe sorting and went around the house and collected shoes (at least downstairs, since I wasn't going to risk waking anybody up to find any shoes that may have wandered upstairs).

I sorted through the shoes that didn't fit, threw out shoes that had holes worn in them, put aside shoes that were basically new that Maggie had decided she hated to take to the consignment store, and then put shoes that don't get worn everyday in the shoe organizer in the closer (like Sadie's church shoes).  Then I set out the shoes we wear every day (lest Maggie go searching for a special pair in the closet... I try to avoid that because it gets messy really fast).


Maggie has very specific ideas about which shoes go with which outfit.  Her ballet outfit can go with ballet slippers, her Dora ballet crocs (sometimes) and now (and this had me on cloud nine because she hated those pink sparkly shoes when I first bought them, thinking she would love them) she's decided that the pink sparkle shoes can also be worn with most of her pink outfits.

I'm always impressed at the choices she makes because whatever she decides it usually is the shoe that makes the most sense with the outfit of the moment.

Today was a victory.  We made it to Mass on time.

This was because for the first time in almost a month we didn't have a meltdown before Mass.  Last week it was because I was super mean and said no, bathing suits are not appropriate Mass attire.  The week before it was because I said she couldn't wear a tutu.

So this week when I came downstairs and saw that she was only wearing a pink unicorn rain coat I was a bit nervous.  But when I brought up a pink dress with white polka dots she put it on, and while she couldn't find a pair of shoes that "matched" well enough I was okay with bare feet since we'd actually agreed on a dress (and it's not like she's down running around anyways).

When we got to Mass, I quickly made crosses to prevent the possibility of sword fights: 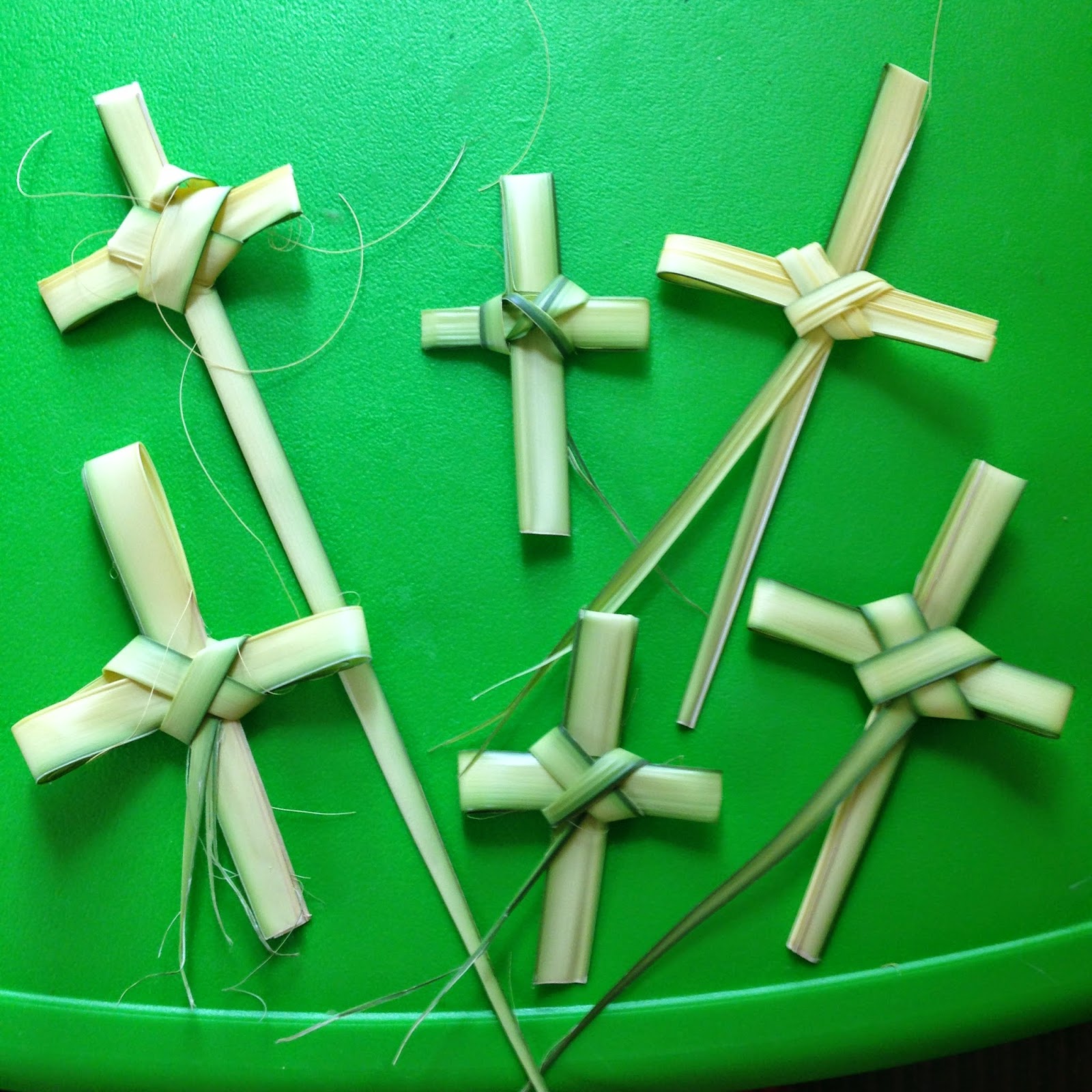 When I handed Maggie her folded palm her face lit up and she said "cross, cross, cross!!!" and then proceeded to try to stand it up on the floor (don't worry, we basically live in the narthex).  She also said "love" about a dozen times, which is usually reserved entirely for "Baby 'Ames"... who hears it about a dozen times a day).

All in all it was a good morning!

I had major, major guilt yesterday.

I made a mistake in my scheduling and Sadie missed a cake decorating class with her AHG troop.  When we showed up we found out we were one Saturday late.

Sadie had been really, really looking forward to the class for... weeks.

As I explained what happened I expected her to burst into tears.

Instead she said:  "You don't have to be sorry Mommy.  It was a mistake.  And I'm not letting things upset me."

So... we went home and Paul took her to the store and she picked out frosting and cake toppings and came home and said "I was kind of in a princess sort of mood" and then she made this: 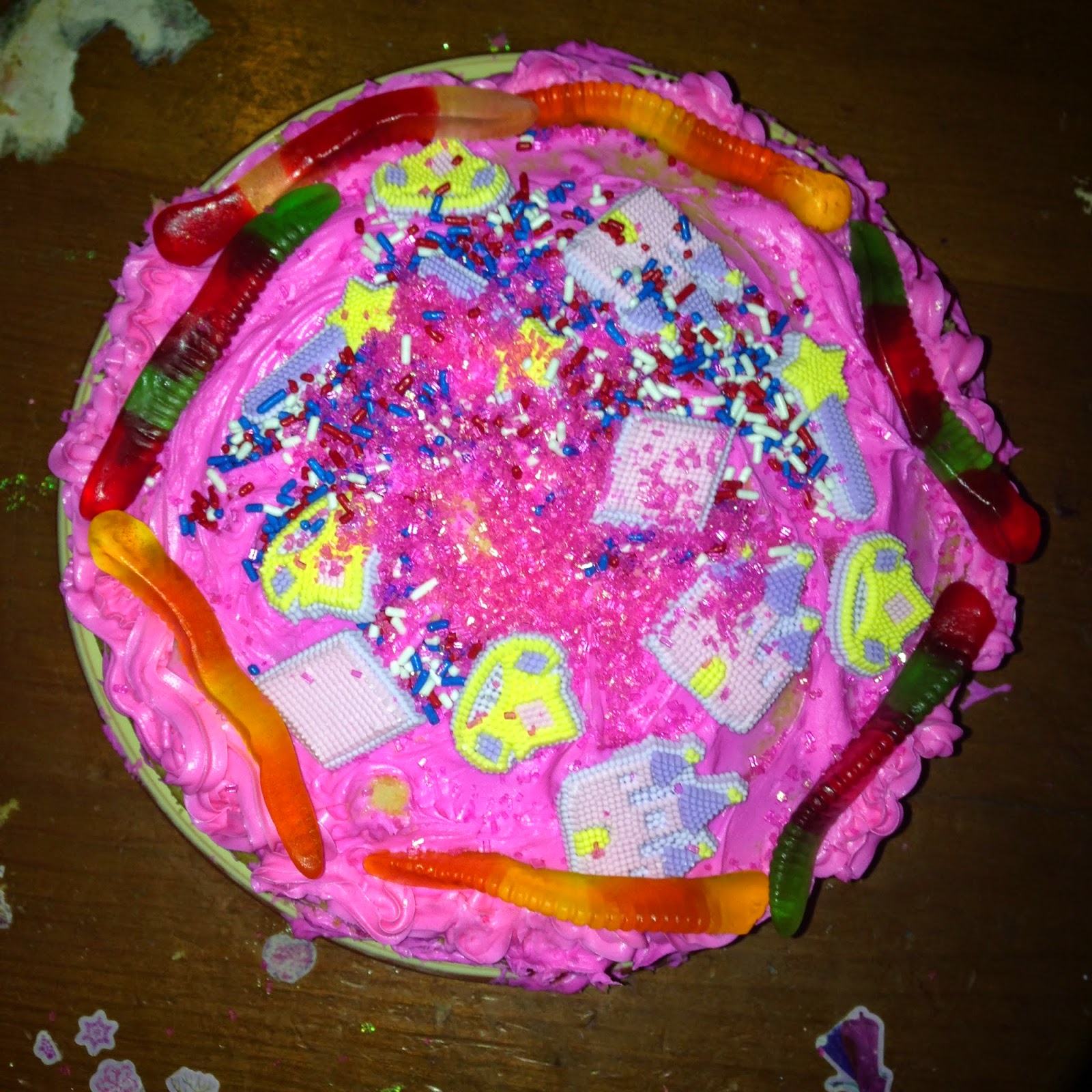 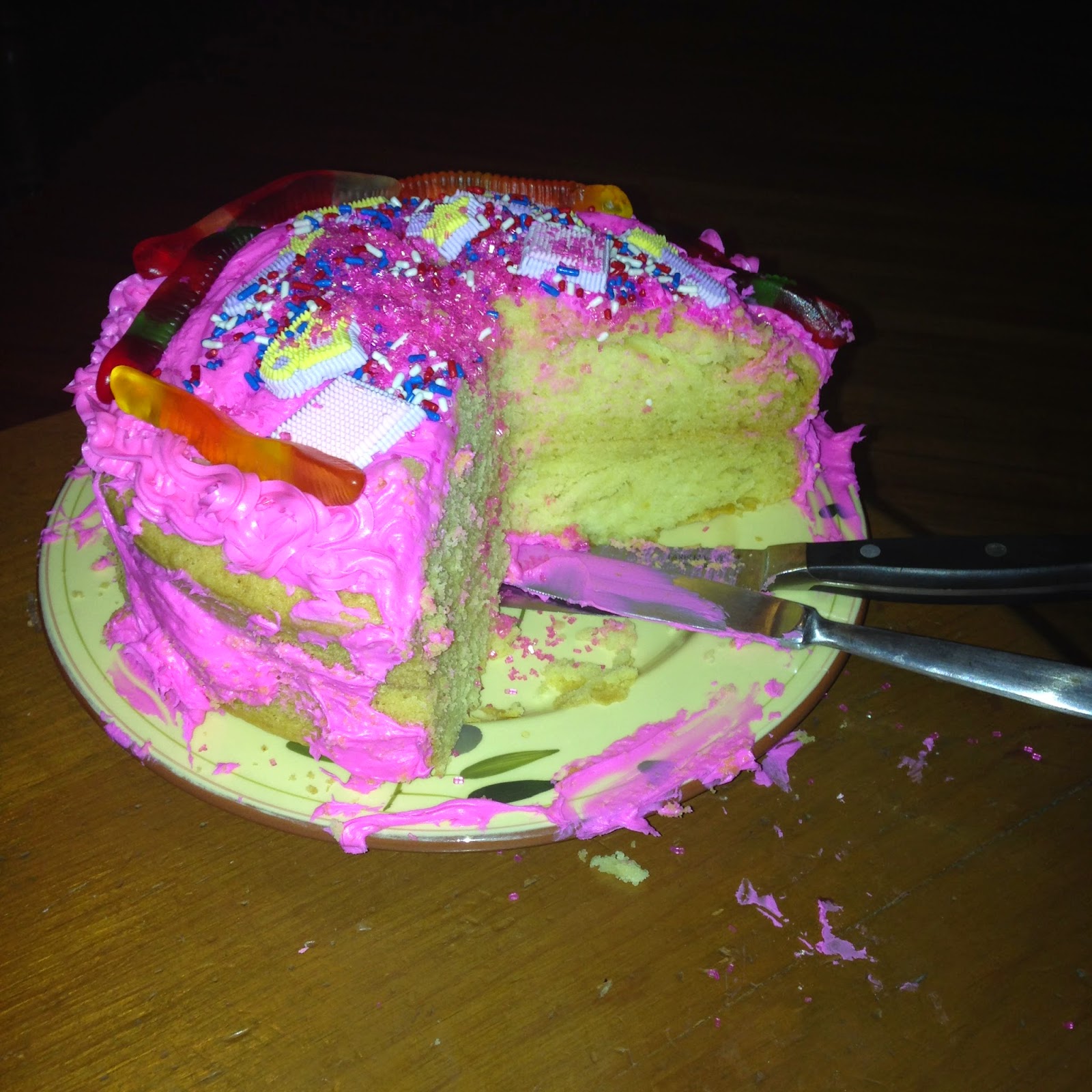 And ate a giant piece.

She also announced that she'll be making me a princess cake for my birthday this week... I hope it's chocolate!

When we arrived home from the cake-misadventure I pulled out my camera and captured this (it's a little blurry but you get the idea): 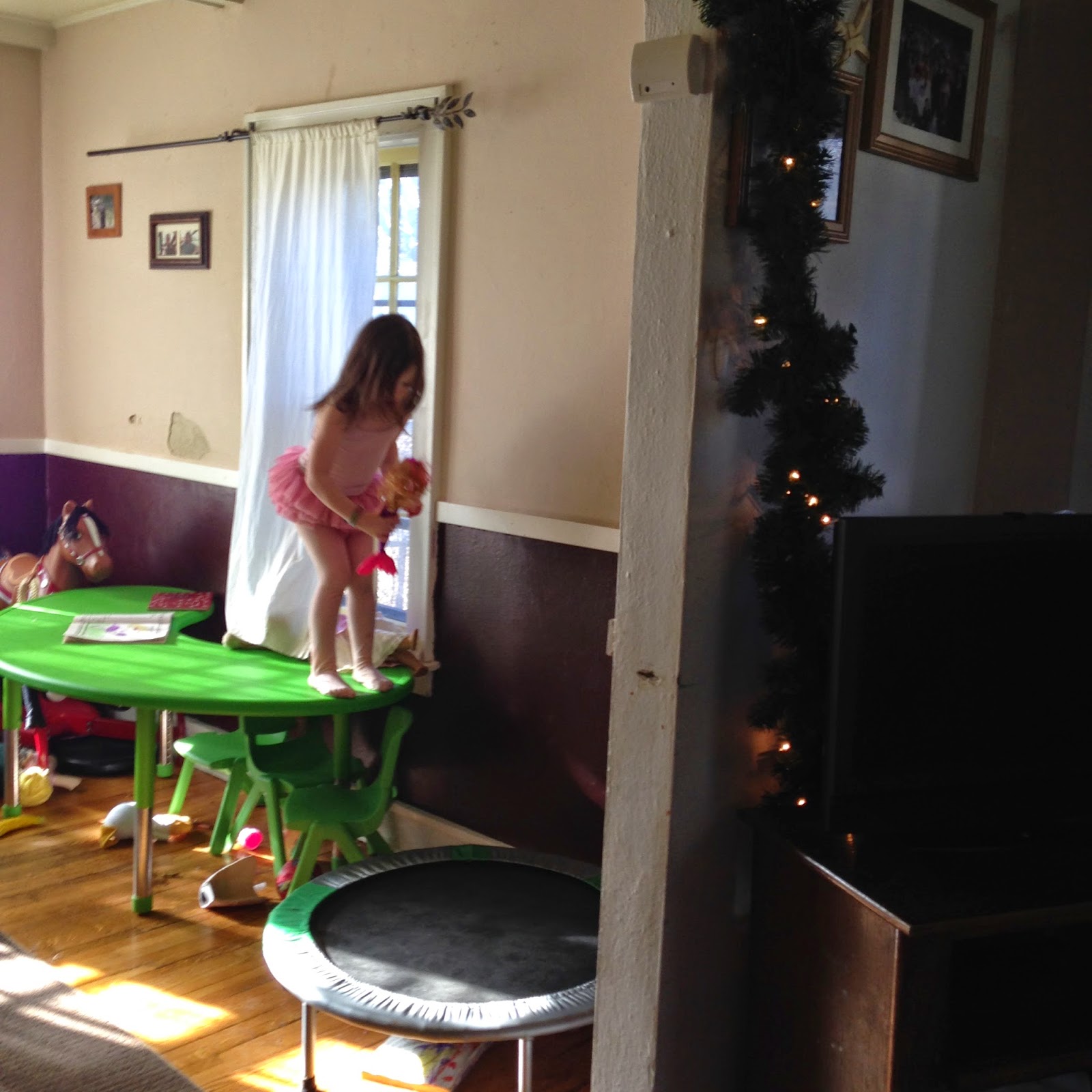 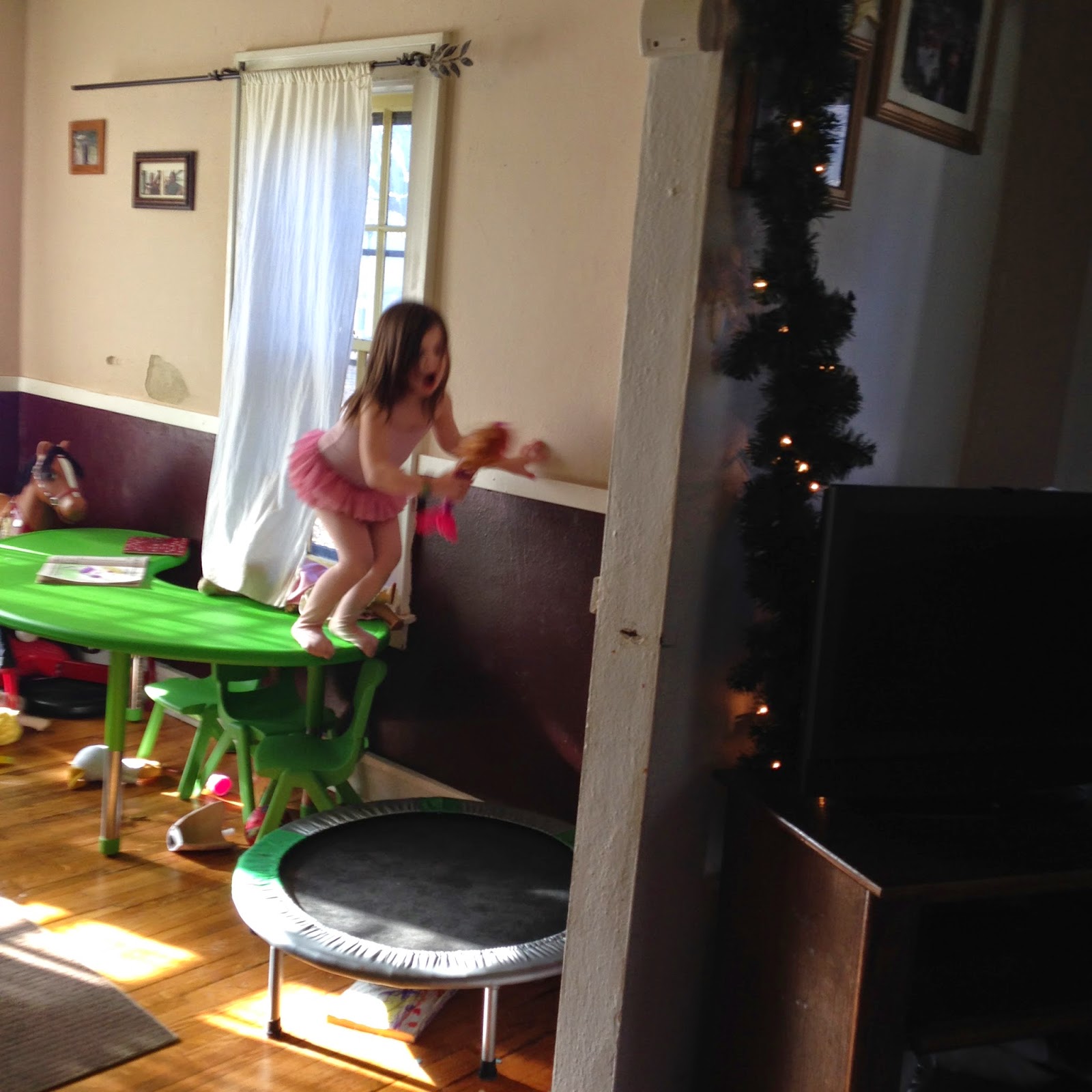 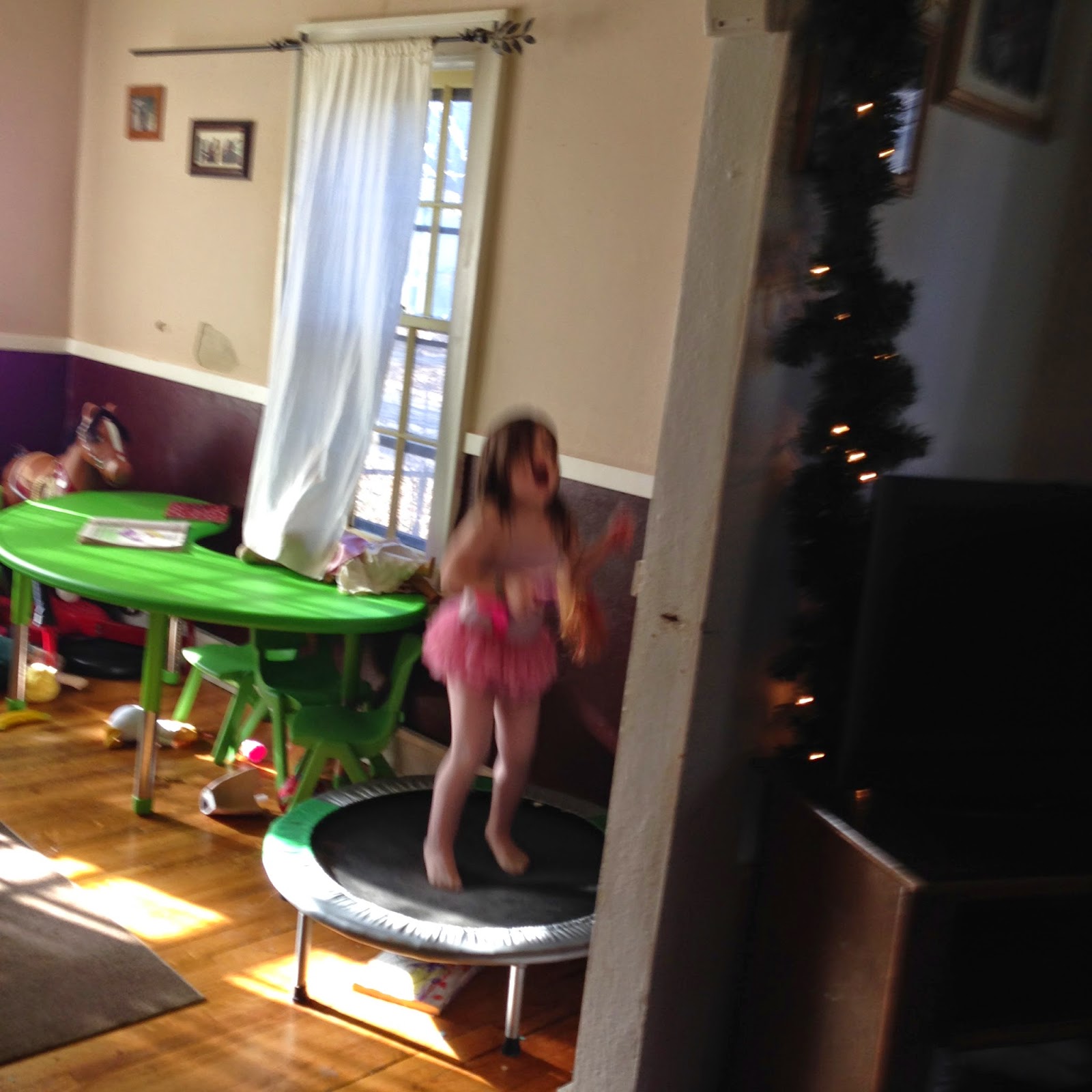 I should have known that putting that trampoline next to that table was begging for trouble.

For more Quick Takes head over to This Ain't the Lyseum!
Posted by Cammie Diane at 8:08 PM