Patch and the Eucharist 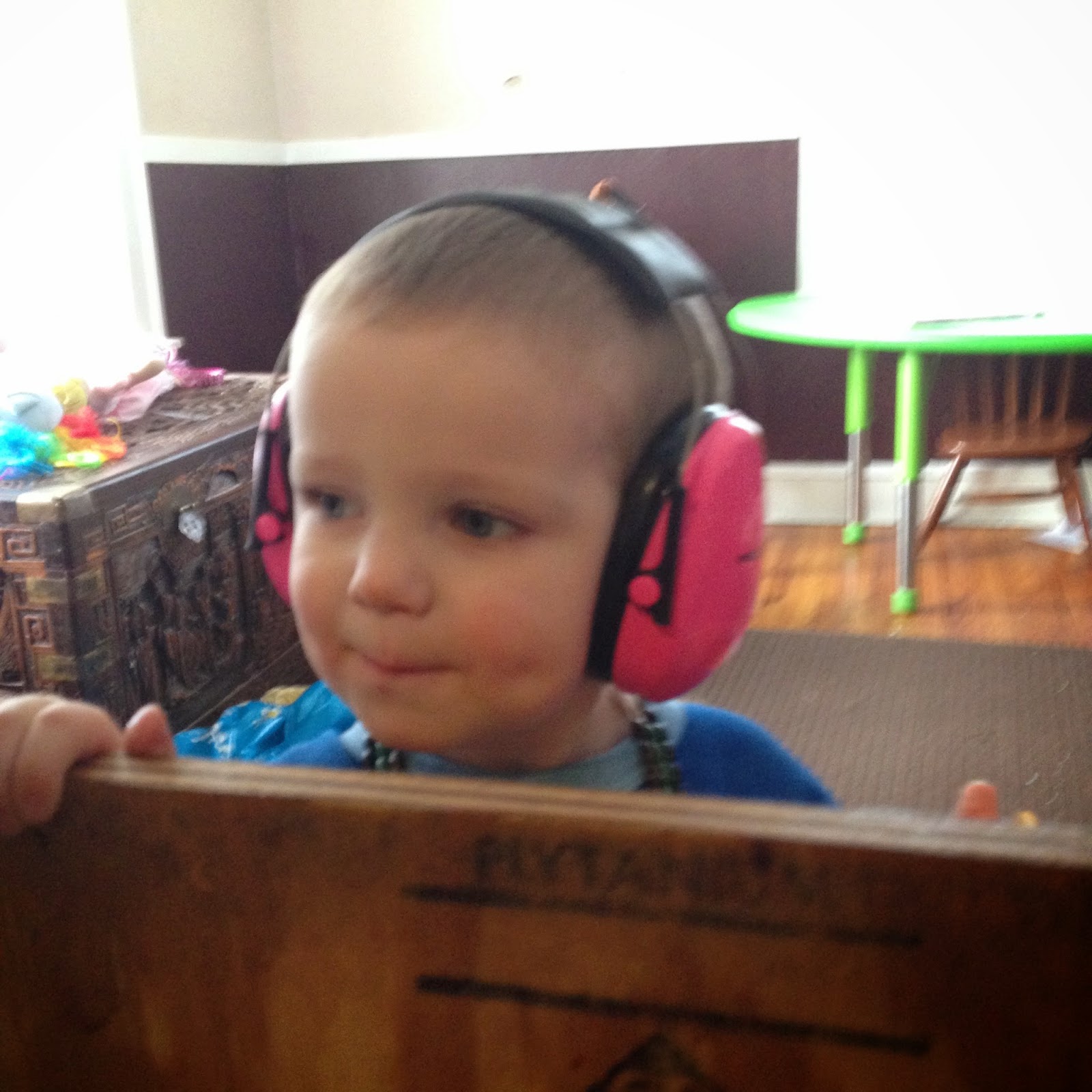 I'm pretty sure that by the time Sadie was Patch's age I was already trying to explain transubstantiation to her.  And regardless of what she understood, anyone reading my posts from 2011-2013 can find plenty of instances of Sadie trying to convince various priests across the country that she was old enough to receive (here's one of my favorite moments, among many).

Two kids later, when Patch arrived, my hands were so full juggling toddler antics at Mass (and every other moment of the day) that I'm certain that his two year old catechesis is far less complete. It also doesn't help that Patch sits still to listen to an entire book (even a short toddler board book) just about.... never.

The two of us reading We Go to Mass

(or any book) usually turns out like this: I sit down and call Patch over.  He runs across the room jumps up on the couch and snuggles into my lap.  He gives me a kiss and I open the book and read the first page.  I turn the page.

He lunges forward, grabs the book, laughing, rips it out of my hands and runs around the room waving it over his head and laughing hysterically.  Since I know what's coming I now may have better luck holding on the the book.  Maybe.

So the point of all this rambling is that I have no idea what Patch actually understands.

However a few weeks ago I found him playing with a Pyx  that he'd convinced Maggie to get him off of the mantle and saying "Cookie.  Cookie.  Cookie." over and over to himself and thought "Awesome job Mom.  Parenting fail." 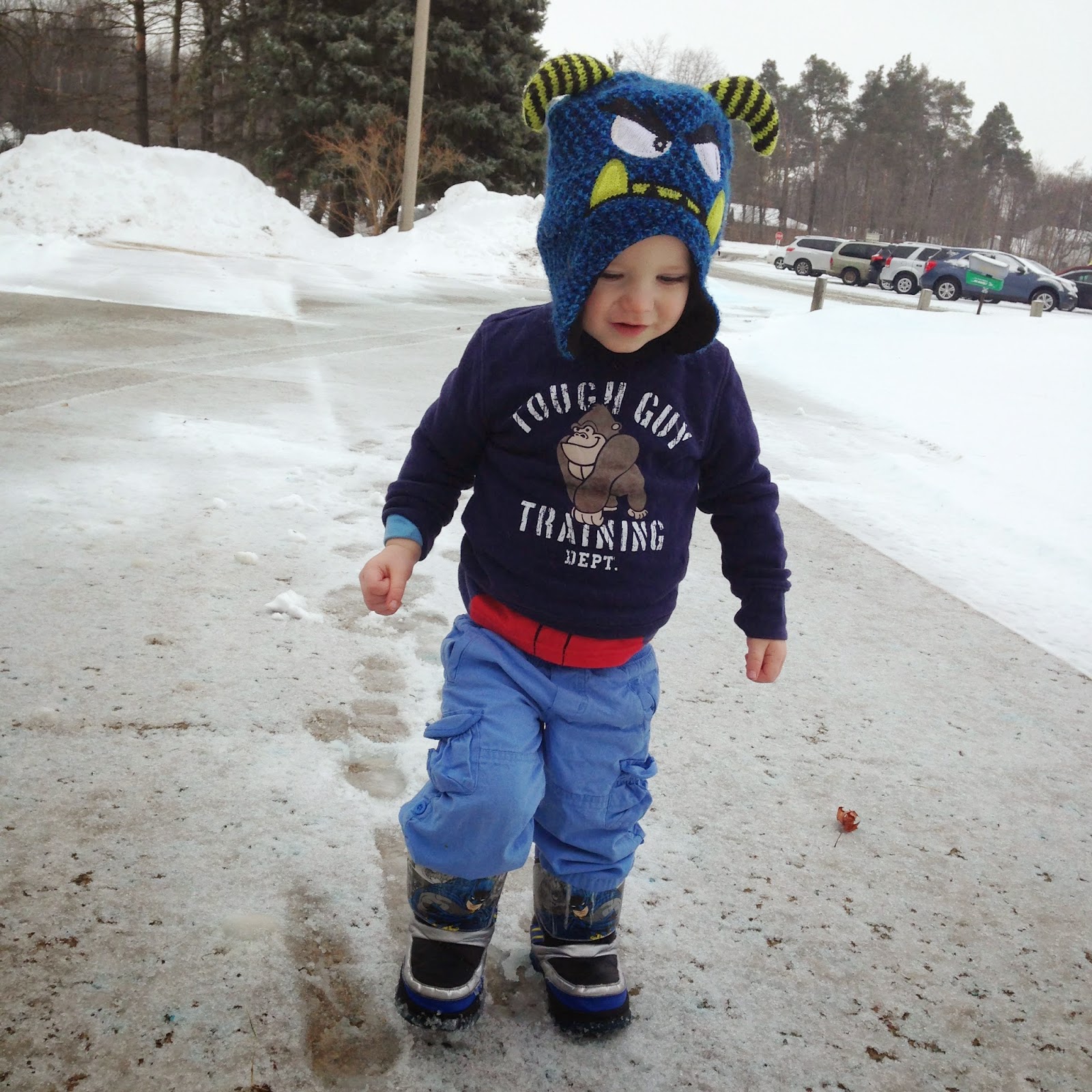 Two weeks ago when the first person from Early On came to do the initial intake appointment he took a bunch of stacking cups out of her bag and flipped them in opposite directions so each cup had another cup upside down in it, and he lined them up and put them in a line in front of her and said "Cookie, cookie, cookie!" in a happy little voice and while she marveled at his imaginative play I realized (not out loud) that they look an awful lot like that same Pyx he had wanted to carry around for the day.

Yesterday we made it to the 9 o'clock Mass.  I had Patch on my back, to keep him from attempting to run wild, and for once he wasn't fighting to be down (for the record I think it took about four weeks of wearing him without bending on his feet not touching the floor once, for him to accept the idea).

He was quiet all through Mass and then it was time to go up for communion.  As we reached the halfway point walking down the aisle his little clear, crisp, two year old voice rang out through the entire church as he began to chant:  "Cookie!  Cookie!  Cookie!" the rest of the way down the aisle, completely ignoring my attempts to hush him.

He fell silent before we reached the priest, but as we turned and walked back down the aisle his little voice rang out one more time as he exuberantly proclaimed "I got!!!!"

He didn't, just in case anyone is concerned. 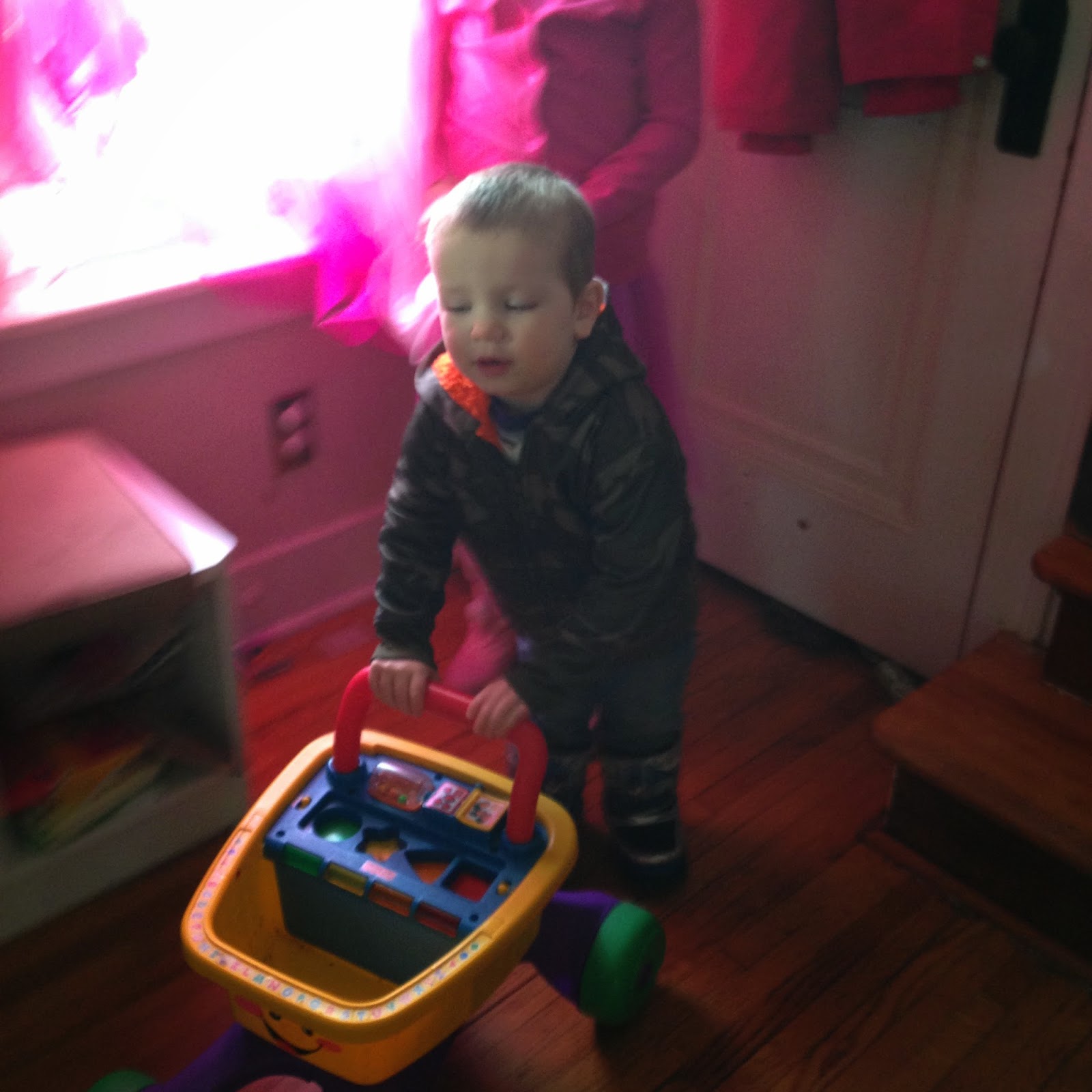 Last night and this morning I thought more about the moment, and all those "cookie" moments before yesterday, and I couldn't help but wonder if Patch has been absorbing more than I'd thought.  Maybe the stubborn little boy who yelled "no!!!!" during each baptismal vow at his brother's baptism is beginning to listen just a tiny bit, given the fact that at home he has very little interest in actual cookies when we're at home (he won't even eat them all the time when I am handing them out), yet he's incredibly preoccupied with all things Eucharist related in our house.

He doesn't have very many words just yet (he's starting Speech and a special playgroup with Early On this month since he qualified with a 21% speech delay) so "cookie" is one of the few that our boy who doesn't use very many words, has to express himself.

Either way, he seems to be getting more excited about going to Mass.  He has three rosaries that he carries with him 24 hours a day 7 days a week (and has for the past month).  So maybe it was another total parenting fail... or maybe he's just beginning to show that same glimmer of excitement that his sisters both have about what's going on at each and every Mass.
Posted by Cammie Diane at 8:43 AM