Yesterday I came downstairs and said "love you" to Maggie and she replied by looking at me and smiling broadly and saying "Love me!!!!" in her beautiful little voice.

Today there was a technical glitch with a new program that's being used to track her progress (although it promises to be awesome once it's worked out) and so she spent some time playing with some new picture cards while I walked back and forth holding James in the living room, watching Sadie do her copy work at the dining room table and watching Maggie sit on the floor using a trampoline as a table while her therapist asked her questions.

Earlier in the day I'd watched as she verbally rattled off labels to pictures, and I found myself smiling as she followed two step instructions like "clap your hands and cover your mouth."

At the same time these last few weeks have been rough (in so many ways).

You see in many ways we're incredibly blessed.  Maggie very, very rarely has meltdowns where she's completely inconsolable.  She's actually very good at knowing when she's feeling overwhelmed and grabbing my hand and leading me to the stairs and putting my hand on the gate to let me know that she needs to go up to her room to be by herself. 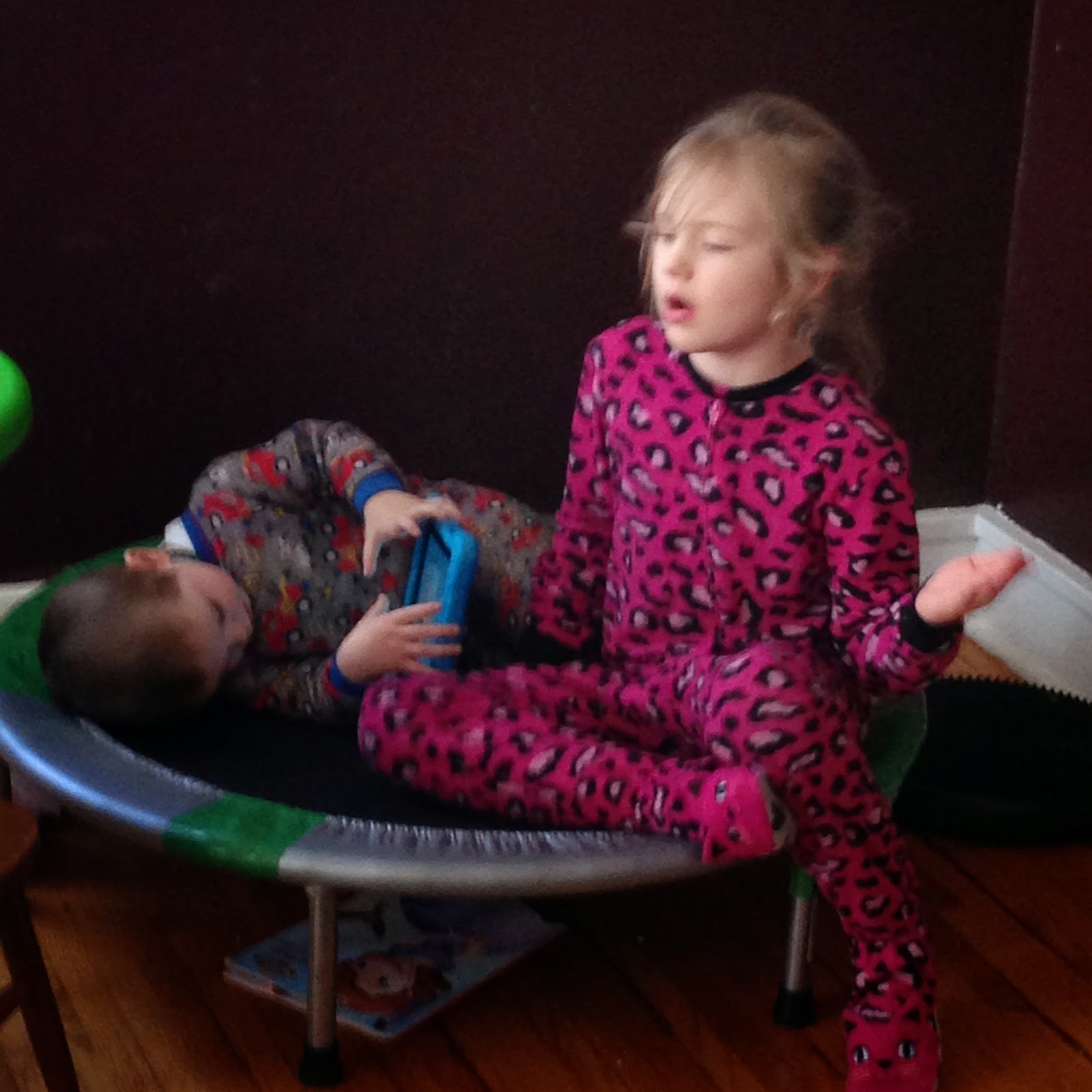 There's one sound though, that causes an instant meltdown almost every single time that she hears it.  And that sound is her big sister coughing.

When Sadie coughs there is, almost without fail, a nearly immediate reaction.  There's usually a pause of maybe two or three breaths followed by the saddest, most heartbreaking cry that I have ever heard.  And she'll cry and cry and cry, collapsing on the ground, very obviously in pain.

A virus has been floating around the house and when Sadie began to sniffle I knew we were in for a stressful week.  When the sniffles turned into a cough the tears began.  And then they stopped.  At it's worst, Sadie's cough stopped bothering Maggie.  When the cough sounded wet Mae was suddenly fine (which leads me to believe it's something about the sound when she has a dry cough).

Then Sadie started to get better and the dry, hacking, asthmatic cough returned (only much worse than it usually is, since she's getting over being sick on top of her usual all-the-time cough)... and so did Mae's tears.

On Saturday night, after a day of coughing and trying to keep the girls separate since being near Sadie's cough was unbearable for Mae, I was at wit's end.  My heart ached for Maggie, since she's obviously in pain (and since, as I watched her curl up in her sisters' bed I began to realize how much she was missing Sadie) and for Sadie, who's desperately trying not to cough and who is so sad as she watches her sister crumple to the floor every time she coughs.

So on Sunday I made a purchase on Amazon and today it arrived: 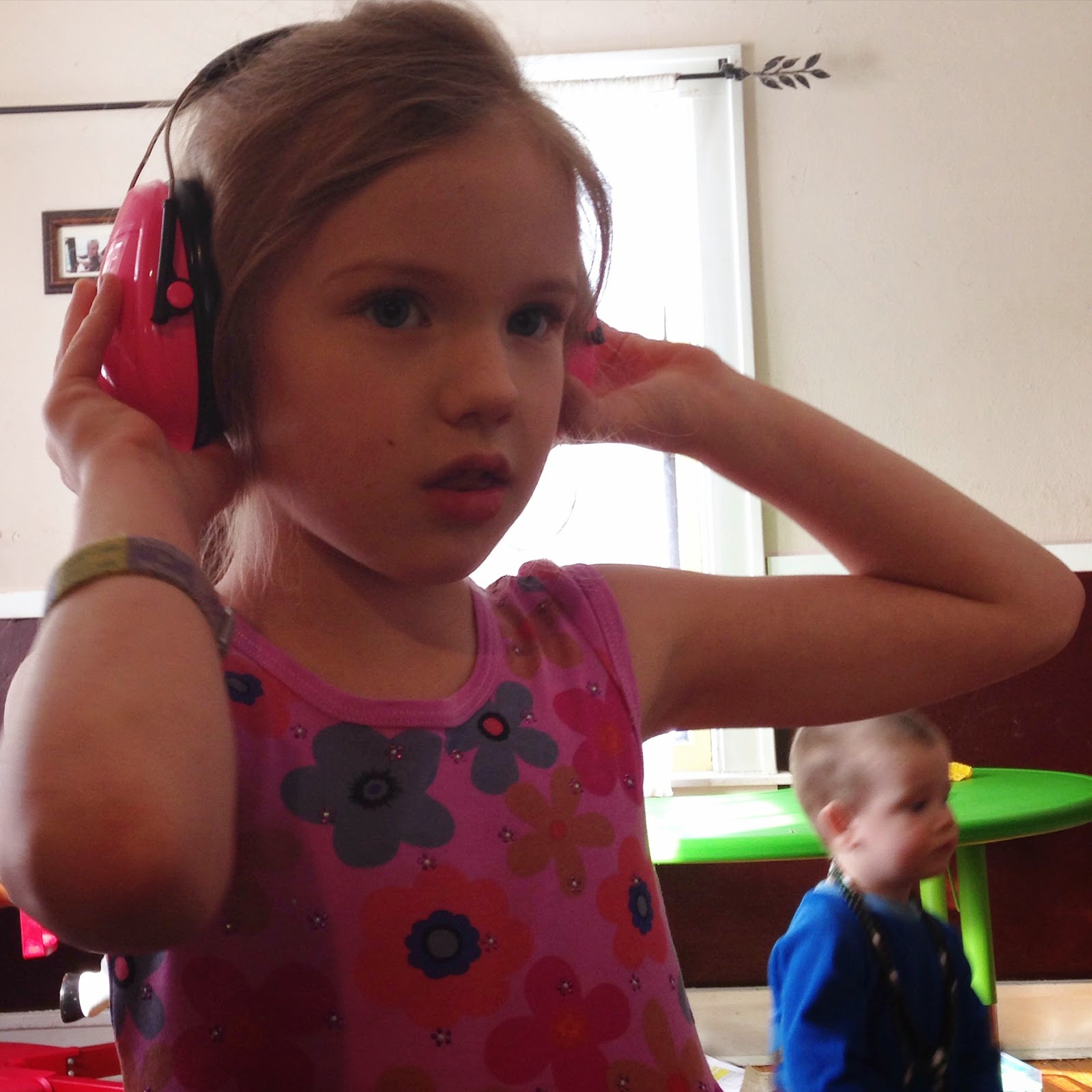 I tried them on.  Sadie tried them on.  Then Sadie and I talked about how Maggie would probably like them better if when she first saw them Sadie was wearing them (the best way to make Maggie like a dress is to have her sister try it on) and so Sadie put them on and I brought Maggie downstairs from her self imposed time away.  And she tried them on at least a half dozen times, for five to ten seconds each time, and Sadie even coughed once when she had them on and she was fine.

And then, when she was done, Patch grabbed them and wore them for a solid half hour straight: I'm cautiously optimistic that they may work for their intended purpose.  They've been working with her on wearing headphones during therapy, so I'm going to bring these with her various therapies and hopefully she'll realize how much they help and start wanting to wear them more and more.
Posted by Cammie Diane at 10:14 PM