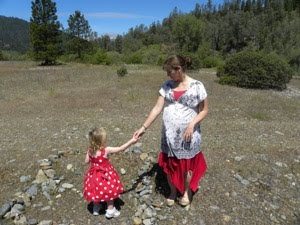 When I lay down the contractions stop. Mostly. Or at least they slow down so there’s only a few an hour (as opposed to a few every ten minutes).

However, there isn’t much time these days for laying down.

Paul is convinced that Maggie is almost on her way, and the rather long, painful, close together contractions aren’t helping convince him otherwise. He’s begun to stubbornly insist that I pack my bags, while I continue to maintain that the bag packing will not happen until our boxes are unpacked (I am making good progress… Nani watched Sadie this morning and after Mass and breakfast with a friend I went to work organizing and unpacking).

I just need one more week.

In two weeks, once the unpacking is done, I will probably be impatiently waiting and wishing that I had gone into labor, but for now I need this baby to stay put. After all, as I’ve mentioned again and again (almost as if to convince Maggie of this fact!) I had at least four weeks of contractions with Sadie before my water broke… Here’s hoping I have at least two more weeks with Maggie (would it be greedy to hope that the contractions stop altogether?!?!).
Posted by Cammie Diane at 1:25 AM