I am returning from this morning's shopping trip triumphant! Not only did we get in our 2 1/2 mile morning walk, but we saved big time: we got $97 worth of groceries that we needed for $5.

I have to admit, the first time that I tried this whole coupon shopping thing I was a little nervous. I went to hip2save.com and made a list of deals of things at CVS that we needed and things that we didn't need yet, but that we would need that were free or practically free. I also added to the list things that we would make money buying (usually through a combination of store sale, coupons and rebates). And then we went through the store and ticked each thing off the list.

This next part only works if you shop at a store like CVS regularly (we do... not only does Paul work there, but it's the only store in town that sells what it sells). The receipt printed out and it was one of those incredibly long receipts that I always hear people complaining about in CVS. It was a print out of Extra Bucks, which is basically CVS cash that you can use on anything at the store. It came to $32. If you add that to the rebates I am just about to send in it came to $40 back. Meaning we got a basket full of groceries that we needed for around $30.

Fast forward to a week later (today). Two things are starting to happen. One is that as I buy the almost free/ free stuff I am creating a stock pile, so that we don't have to buy other products at full price (like I did last week) just because we need it. The other thing is that I had my neatly cut out stock pile of Extra Bucks.

Here's how round 2 went. We got to the checkout lane and again I almost had a panic attack. After Paul's discount it rang up to $97. I took deep breaths. We NEEDED diapers, and the sales were pretty good. Then I handed over the coupons. It was knocked down to $76. Still more deep breaths. Then I forked over last weeks extra bucks (Paul had an extra eleven he'd given me). The price was now $34. So I paid the $34 and waited for the print out of coupons to use next week. The extra bucks we'll use during next weeks trip came to $27. Which means that we paid $7 for $97 worth of groceries (and the $97 also gets added to the points total for 2% cash back at the end of the season, which means it's more like $5. 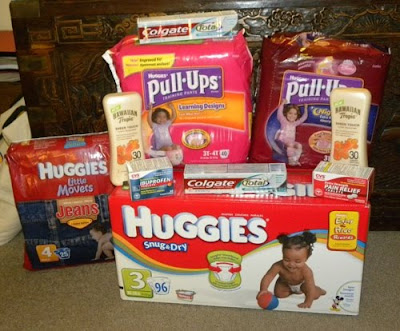 Considering the price of diapers (two of the packages are for Maggie later on because the sales were so good and two are for Sadie now), I'm pretty thrilled with getting all this for $5!
Posted by Cammie Diane at 2:12 PM

Email ThisBlogThis!Share to TwitterShare to FacebookShare to Pinterest
Labels: Coupons, Living on a Little