Maternity Outfit of the Week 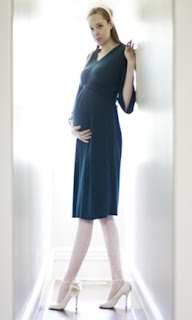 While I was on the Shabby Apple website I stopped by to look at their maternity section and loved what I found. It inspired me to do a Maternity Outfit of the Week (at least for this week!).
Here it is --->
At the beginning of this pregnancy I needed to find a dress for my grandmother's funeral. Even though I was only a couple of months along I was already having trouble fitting into my regular clothes (it's amazing how much faster you show during a second pregnancy!) and thought I'd find a dress that would last through the entire pregnancy, that was comfortable enough to wear regularly but nice enough for Mass (or other formal occasions).
Some of you may remember the complaint that I had after that somewhat frustrating shopping trip. ALL of the dresses in the maternity store (and maternity sections of the department stores we stopped by) were thigh skimming. They hardly covered ANYTHING.
Now I know in Hollywood pregnant starlets might like to prance around in next to nothing while carrying around a baby the size of a small (or not so small) beach ball, but in reality I don't know many pregnant women who enjoy walking around in next to nothing. I know that I certainly don't!
I did finally find a dress (the dress that I'm wearing in the banner picture) in the Old Navy clearance section. It was actually supposed to be a cover up for the pool or beach...
So it's a relief to find a store that sells classy maternity outfits that don't look like they're about to a) fall off or b) reveal the wearers underwear. Not that I'm in the market for maternity clothes these days... in fact I've already unpacked my non-maternity dresses and stare at them wistfully each time I put clothes away in the closet... and with the help of a good post-c-section girdle/corset it shouldn't be too long before they're back in the rotation (I hope!)!
Posted by Cammie Diane at 12:34 AM

Email ThisBlogThis!Share to TwitterShare to FacebookShare to Pinterest
Labels: fashion, Outfit of the Week, Pregnancy Fashion