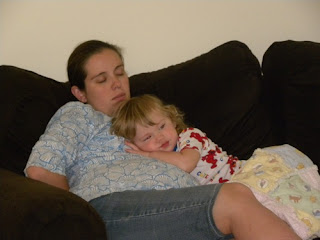 This morning I realized that I HAVE to slow down if I'm going to get anything done around here. After two days of running around cleaning and moving stuff I finally had to admit that my pregnant body can't do quite as much as my mind would like. I think the quote that I grew up hearing my dad say quite a bit was that I was "writing checks that my body couldn't cash."

I kind of succeeded. I was not limping at 2pm. In fact I don't think I would limp if I got up and walked around right now. However I really don't feel like even attempting to walk any distance at this point.
Our apartment is beginning to look like home. Most of the furniture is in now, although I will feel infinitely better when all the clothes have been put away in the closets. Paul's theology books have already made it onto the shelf and he packed most of my books along too, so they're all in place.
We discovered today that the bargain washer and dryer really do work, as does the refrigerator. Unfortunately the dishwasher does not (which doesn't really bother me) and the oven is touch and go (which really does bother me). The top element doesn't seem to be working and the bottom one goes on and off (although the garlic bread that went with our dinner did finally cook!). And I've found that one of the most valuable kitchen tools that I own is the little hot plate that I bought at Long's a few years ago. The burners on the top of the stove only have a few tiny spots that heat up (it looks like red splotches) so I've been using the plug in burner. While it slows things down, because I can only boil on thing at a time, it works.
I was relieved to hear that we would be allowed to put extra slats between the ones that are already there on the stair railing. That will cut the distance down from something like 6 inches to something like 3 inches. And that will eliminate one toddler danger!
Now to get a little bit of rest before tomorrow arrives! Life should be back to normal soon and I should be able to think (and write) about more than the move very soon! Right now I have a one track mind...
Posted by Cammie Diane at 10:47 PM