My Search for a Bible... 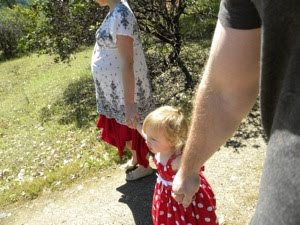 In the past few months I’ve been asked to review a program for Bibles… and so far I haven’t taken the company up on the offer. One reason, is because things have been so busy, between preparing for Maggie and keeping up with Sadie and moving and starting a new business… but the other reason, which is actually the main reason, is that I’m not sure how fair a reviewer I would be able to be in this particular case.

When I first converted to Catholicism I had a hard time finding a new Bible that “fit.” It’s silly, and I wasn’t going to let it stand in my way, but it was also something that felt very important at the time.

I’d grown up reading the King James and New King James. While I had my little picture Bible when I was little, I also lugged around a King James that had belonged to my mom from a very young age (I loved staring at the pictures of the Holy Land that were printed throughout the pages).

And of course there were the memory verses. My head is still crammed full of memory verses and I loved the language that they were translated into.

Early on during RCIA we were each given a copy of different versions of the Bible and we took turns reading the same verses and noting the difference. One, which was written in novel form, was hardly recognizable. Then there was the NAB…

We were each given a copy of the NAB to keep, along with a Catechism of the Catholic Church and a Compendium of the Catechism of the Catholic Church. The Compendium was by far my favorite (what can I say, I'm a sucker for having prayers printed and at my finger tips in both English and Latin), but while I spent quite a bit of time trying to like the NAB I would usually become so annoyed by the language that I’d end up ranting to Paul that the text felt like it had been “dumbed down” (for lack of a better description).

I understand that there should be different Bibles for different reading levels. Sadie loves her two little baby Bibles and usually has one on her lap during Mass. And I loved my picture Bible when I was small. But making the NAB the main Bible used in the US Church seemed odd to me.

Thankfully there were other options.

Paul went to our local Catholic bookstore and explained the problem (I imagined it involved the phrase “my wife is kind of a snob and…”). He came home with a beautiful white leather Douay Rheims. And I loved it! I was relieved to learn that the NAB wasn’t the only option… Later I discovered the RSV CE, and it’s become another favorite (okay, okay, it’s because it sounds familiar to me… especially the psalms…).

I’m glad that there are different options out there… I just don’t think that I could fairly review the NAB… Now if there’s a Douay Rheims program out there I’d be glad to take a look!
Posted by Cammie Diane at 1:14 AM