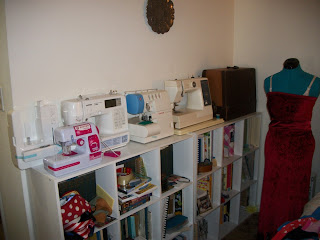 I should have known that this mechanical act of rebellion was coming.  The machine had been snapping off needles all week (a record four in a twenty four hour period), but I had ignored the symptoms, telling myself that I simply had remarkably bad luck, hitting pins right and left, while buying another pack of sewing machine needles.

Then I hit yet another pin, only this one contorted into a L-shape and was slammed down into the sewing machine gears.  A tiny piece of pin poked out, and I thought about grabbing my pliers, but laziness after sewing for several hours won the day, and I went with the less than awesome decision to try to retrieve the pin without pliers and get it with my fingers.  The pin disappeared the moment I touched it, into the recesses under the sewing machine foot.

I sighed and began to deconstruct the machine.  I shook it a few times, hoping that maybe the pin would fall out.  I removed the plastic bobbin cover and then determined that I needed to remove the metal plate with the screws.  That was when I discovered that the entire machine was stuffed full of rather oily lint.

Now I know I'm supposed to clean my sewing machine.  I used to clean my kenmore several times a week.  But my Brother takes quite a bit more work to take apart (or at least it did the first time, I figured out a trick tonight, so I'll definitely be doing it more frequently) and I'd avoided it for... an embarrassing number of months.  Considering that the machine averages a minimum of three hours of sewing time each day, and as many as six hours on days like today, I had a pretty good idea that it was really, really going to need it.

After fifteen minutes of removing lint from all the crevices it had filled, I found the pin, removed it with pliers and put the machine back together.  Amazingly it worked on the first try.  And I was able to finish up all the machine sewing that I absolutely had to do before our long drive east.

Now if I could only finish machine quilting the U.S. Map quilt I made Sadie my sewing goals for the week would (pretty much) be complete!
Posted by Cammie Diane at 11:24 AM