When I heard about the Chick-Fil-A boycott I didn't actually have a problem with.  I read the quote and thought that the whole thing was blown out of proportion, but people can spend their money where they see fit, and since I boycott quite a few companies, I can understand where Chick-Fil-A boycotters are coming from.

Then local governments decided to embrace the roll of thought police and things started to get a little bit scary (okay, a lot scary).

Before I get into this any further let me go back over what exactly happened to cause this whole uproar, just in case anyone missed it.  Chick-Fil-A's President, Dan Cathy, said this in an interview with the Baptist Press earlier in the week:


“We are very much supportive of the family — the biblical definition of the family unit....We are very much committed to that,” Cathy emphasized. “We intend to stay the course,” he said. “We know that it might not be popular with everyone, but thank the Lord, we live in a country where we can share our values and operate on biblical principles.”

That's the quote that launched a thousand news articles decrying the bigotry and homophobia of Chick-Fil-A, which left some wishing cancer on anyone who dared step through one of their restaurants' doors.


Apparently Mr. Cathy missed the mark when he said that we thankfully live in a country where they can believe something and operate on biblical principles, which include being closed on Sundays and supporting a scholarship program, foster care, and a conference and retreat center.

Now let's be clear: Chick-Fil-A doesn't discriminate in hiring or in service, which is what you might believe if you read some of the articles circulating around out there, which is a conclusion one could reach if they took Cathy's words out of context and did some major twisting.


So that's why I was baffled when I began to see press articles about cities like Boston and Chicago vowing to keep Chick-Fil-A from opening new stores.

What would happen if a city with a conservative majority decided to ban a Starbuck's or a JCPenny's from opening their doors because those businesses "didn't reflect the city' values"?

And let's think about what's happened in every. single. state. that has opened up this issue in a referendum: the majority of people have, over and over again, said that they support the traditional model of marriage.  Which means that if we're going to play the "if you don't think like I do" game, and institute it across the board, we're going to have to shut down half the businesses in our nation.

I'll admit that I generally avoid this topic, because I know that there's a very good chance that anything i say on the topic will be twisted a misunderstood by those who don't understand that someone can believe that an act is wrong, and still love the person who did that act.  JoAnna summed up the way many pro-traditional-marriage supporters feel at the moment, very well, in this post.  And for those who are truly curious on what many of us believe, Jennifer Fulwiler's article a few weeks back gave one of the best explanations  that I've ever seen.


I do wonder how many of those who boycott Chick-Fil-A would consider expanding the ban to other organizations that are less then friendly to their beliefs.  A Chick-Fil-A boycott is rather easy.  Other boycotts are more difficult to stick to: 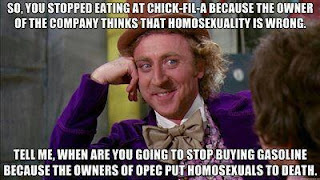 And for the most excellent post I've seen on this whole debacle, click here.
Posted by Cammie Diane at 1:27 PM