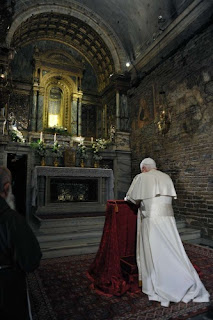 This morning school consisted of Sadie and Patrick and I being glued to the TV while Mae Bae ran around us not destroying stuff (wheat free!!!).  We were streaming EWTN on the Roku, and it was nice having Sadie there peppering me with questions so that I didn't descend completely into the melancholy sort of mood that was threatening and instead managed to pass the hours with bouts of over the top sniffling accompanied by an occasional tear or twenty.

But I turned the TV off when the Pope left the balcony after addressing the crowd, and I'm pretty sure that outright sobbing might have followed if I'd seen the Swiss Guards leaving because he's no longer the Pope.  When he left the balcony it was still a few hours off and those few hours were somewhat comforting because it wasn't here just yet and I've been holding that moment at arms length and trying to push it away to some little back corner of my mind since that morning when the announcement came that he would be stepping down.

Sadie played while the commentators spoke and the cardinals each came up for a moment with the Pope (and I felt my eyes glued to the screen because the idea of him standing for that long had me worrying for him), but when he came out and got into the car her little eyes became glued to the television and the overflow of questions began, with any answers I gave or that she answered for herself mixed in: 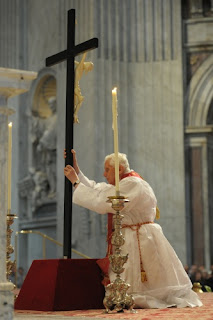 "Is that the castle Mommy?  Is that the castle he's going to live in? What castle is it?  Why is he going away?  Is he the king?  He's the Pope.  Is he the king too now?"  (Oh how desperately she'd like to have a royal family in the US)  "That's Rome?  Oh that's Rome!  Rome.  That wall looks like a castle.  That's the Vatican!  It's a city and a country and a castle?  It looks like a castle."

I listened to the beautiful tolling bells, mixed in with her words and wished that we'd gotten to see this Pope, this great teacher, during his pontificate, and wistfully thought of how near we came to being in Rome for Paul's studies if another path had been taken.

I made lunch quickly during the helicopter ride after they passed the Colosseum, and ate an entire plate of shortbread that I'd been saving for dinner (which I might note is the second time this has happened, the first shortbread incident being on the day he announced his abdication).

We avoided the secular news once his departure began because I didn't want to the bittersweet beauty of the morning and our goodbye to Pope Benedict XVI to be tainted by anger at the commenters and whatever it is they'd be spewing today.  Sadie began calling him Pope-pa at some point. 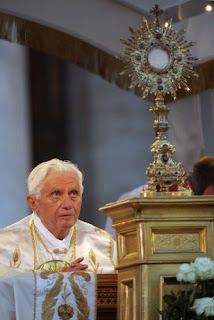 And I thought about the post that I'd like to write but found the words escaping me.  How do you say thank you and goodbye, and our prayers go with you, when you feel like you should say so much more.  Words fall short.

And so we use the simple words, insufficient though they seem, and say "thank you for all that you have done Papa" and send out those words along with our prayers for our Pope now retired and for the conclave who will choose our next Pope.  We pray also for the man that they choose, who will take on the responsibility of continuing to guide the Church (prayerfully guided by the Holy Spirit) through our modern days.

A part of me wants to imagine Benedict relaxing now, enjoying the twilight of his life after carrying such a heavy load these past years... and yet I think a more realistic picture is of a man retiring to do battle for this world by pouring out his prayers so that through God's grace more souls might be drawn to Christ.

Let's pray for him too and give thanks to God for the past eight years of leadership which he gave us, and for the leaders that are to come to guide us through these stormy waters.

The above photos are from this page on the Vatican website.  The below picture (from this site) I included for all of those of you who need a smile right now... 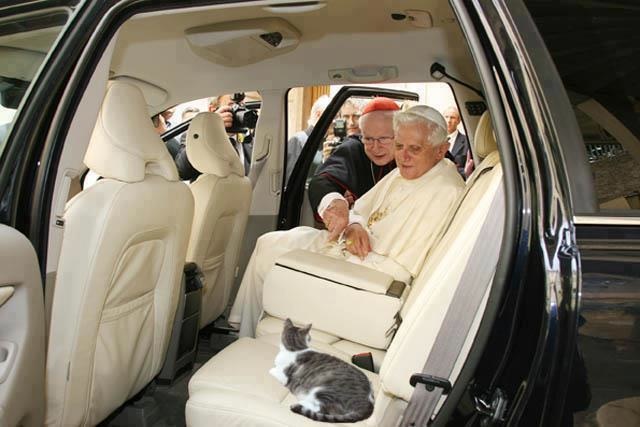