Mae has suddenly started talking, words bubbling off her lips after two and a half years of squealing and chirping.  I knew that she could talk... because I used to hear her over the monitor, talking to her bear when she was supposed to be taking a nap.  But for whatever reason she didn't feel like blessing us with her verbal thoughts, maybe because she did a pretty good job letting us know in other ways exactly what was on her mind.

This week, however, something just clicked and within half an hour she'd said four words.  Yesterday she started putting words together:  "Hot food!  Hot food!"  "Boots on!  Mama!  Boots on!"  and then, bringing a book over that asked about colors she said:  "purplepinkredgreen" as if it were on big word, saying the colors that were on the page in order.  I announced that Mae Bae would get a bean added to the bean jar for her new words, meaning that her big sister is now enthusiastically cheering her on as well.

I'll admit, I'm grateful for the words, mostly because it might stop the prying comments about the fact that both of our girls have both started talking later than the average.  I remember reading somewhere that children who are very physical often start talking later... and I thought, "aha!"  That's it.  Mae took her first steps at ten months.  She regularly scales vertical surfaces just for the heck of it.  She loves to run and jump and dive and crash... and words... until this week, just didn't seem to be that high on her list of priorities.

Sadie was a late talker too and when she began to talk there were letters that she struggled with.  Last year I made a list of those letters and was dismayed when I counted them.  13.  Half the letters in the alphabet. 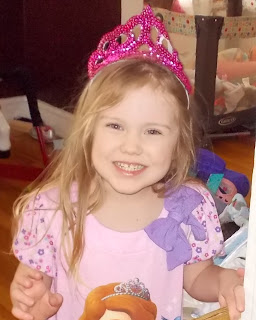 We'd practice letters.  During the summer and the move things were so crazy that we didn't do any formal practice.  Now we read poetry together every day, and she repeats the words after me.  She's mastered ten of those thirteen letters during our reading time and she can say the others... we're just still working on putting them into words.

"I think we should do Spanish with her."  I told Paul jokingly, after our daily lesson one day.  What foreign language to begin with has long been a topic of conversation in our house.  "She says her l's like y's and her v's like b's."

I know there are people we've known who have vocally doubted our decision not to seek outside help... but my thought was always this:  As long as I'm seeing steady improvement we'll keep on as we are.  If I wasn't, I would ask for help.  I have greatly, greatly appreciated the practical advice I've received around here (that's how Sadie learned to say Q!). I have a harder time appreciating comments from people who have watched my child run around with other kids, out of breath and giggling, who then decide to offer their two cents about how something is severely wrong since they can't understand her (when they've never actually talked to her or in other cases, when they have but are clearly hard of hearing).  Yes, it is something we're working on.  Yes there has been major improvement.  And yes, she's a little girl with a little girl voice and being able to hear that voice does aid in understanding what she's saying.

I guess this is just another area, along with how many kids we're going to have and how they'll be educated, where I've gotten to practice not saying exactly what I was thinking in the name of good manners.

So I'm pleased with how things are going along.  I wonder how much Mae's deciding to talk had to do with the fact that about a week ago Sadie started saying:  "Mae doesn't talk.  Angelina Ballerina's sister talks." with a dramatic sigh.

Now to start our school day!  I can't wait to see what Mae is going to come up with today!
Posted by Cammie Diane at 9:14 AM