Yesterday was a mixed bag.  The upside as that I discovered that avocados are okay!  The downside was that I confirmed that potatoes are not (other nightshades have been okay though, thank goodness!).

We don't have a scale in our house, mostly because someone who is four thinks that jumping up and down on them is fun and apparently most digital scales aren't made to handle that sort of impact... but I measured this morning (because now I'm just curious!) and have now lost four inches off of my waist since this whole crazy thing started (eight days ago).  Which seems like of amazing to me.

Since I've eaten bacon every day and am pretty much eating constantly to keep up with calories, I think this gluten free, soy free, corn free, potato free, dairy free, nut free (including coconuts), legume free, added sugar free diet is the most effective I've ever seen.

Another interesting side effect is that I haven't had a migraine in eight days (could these things be entirely diet related?).  I'm hoping maybe the asthma will ease up as well.

That said, I can't imagine having the self control if I were doing it for weight loss reasons specifically.  I sooooooooooo would have cracked after day two and been eating ice cream after the kids went to bed... 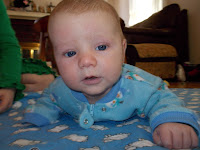 Patrick has found a new way to get out of tummy time.  He's learned to roll over, from front to back.  I put him down in tummy time and he lifts his little head all the way up, tilts it to one side and then lets the weight of it carry him over onto his back.

He'll do anything to get out of his doctor-ordered extra tummy time each day... even though he doesn't seem to mind it nearly as much as he did before (in other words he no longer screams... he just sets to work rolling over). 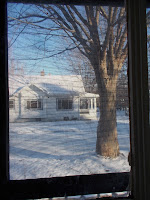 From a couple inches of snow on Sunday night while I was at Mass, to short sleeves on Tuesday, to snow on and off all day yesterday, this week the weather just won't make up its mind.

I have to say, that I did expect more snow when we moved here.  On the weather maps it seems like we're just always getting missed by the snow dumping storms.

When people hear that I grew up in California they generally think sunshine and beaches (I'm from the mountains) but we regularly had several feet of snow on the ground growing up, and it wasn't unusual for snow to be on the ground in our shady backyard all the way through April.

So I keep finding myself hoping for at least six inches of snow at one time (I think we've maxed out at 2-3 so far this year) because it's so much more fun to go out and play in when your boots aren't crunching in the frozen mud below! 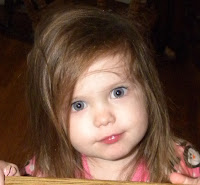 I didn't get bitten once last week at Mae Bae's and my Mommy and Me swim class.  She appears to have moved on from biting to.... pinching.

She's not a pincher (or a biter) outside of swim lessons.  But we get to the class and she gets so excited that she just can't seem to control herself.  There are happy pinches and no-mom-I-don't-think-I-will-blow-bubbles pinches and how-dare-you-even-say-the-words-"can you lay on your back in the water?" pinches.

At least the pinching doesn't leave bruises (or hickey like marks on my neck) like the biting did.
. 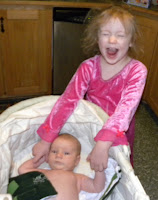 Patrick is no longer allowed to have a blanket, even tucked around his waist like I'd been doing to keep him warm.  Now that he's rolling over and swaddle free his favorite thing to do is to untuck the blanket and pull it up to his face and rub it against his little cheek.  While this looks cute and seems to help him sleep better, I've also caught him pressing it over his little mouth and nose while it's balled up in his hand... so no blankets for the moment, even the tucked in around his waist kind.

The new rule did make bed time feel (and take) a little longer last night.  But he does still do fairly well.  I put him in his bassinet and he will sometimes call for me a few times and I'll come in and see him and go back out and after a few rounds of that he falls asleep on his own (without crying). 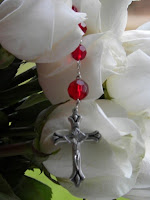 Are you all excitedly gearing up for Lent?

This new diet has thrown a wrench in my Lenten planning.  For the past few years I'd toyed with the idea of going completely vegetarian for Lent and this year I was actually hoping to do it.

Going meatless for even four hours is pretty much impossible now, because I'm struggling to make my calorie goals as it is (fruits and veggies just aren't much help) and I'm not going to risk it while nursing, so I'm going to have to come up with something new and non-food related.  I guess I've got enough on my plate in that area as it is (in fact I keep finding myself thinking: It's like Lent came early!).

I wish I could find my Lenten planning book from last year, but I'm afraid that I'm not going to have time to go down and dig through the boxes of theology books in the basement before Lent arrives...

I know the most popular suggestions are usually internet related of late, but since my businesses are all online that makes internet cutbacks a little difficult...  another year of extra rosaries?

Sadie is the nickname giver in the house.  She's the one who came up with "Mae Bae" when her sister was tiny (although she stopped using that and now says "Maggie" after realizing that there was a princess named "May" in Mulan II).  And she's come up with various names for Patrick from "Pokey Boy" (it came from her calling him "Slow Poke Boy" since she felt he was taking far too long to arrive back in October and November) and "Baby Sparty" since she's a big fan of MSU's mascot.

I thought I had to have a little talk with her about the last nickname she'd come up with though: God.

At least that's what I thought she was saying.  We talked about how that's not really the best nickname (we'd just read a beautiful story in one of her books about thinking of how glorious and wonderful God is every time you say his name).

Yesterday, however, while watching her play with her toys (she was setting up guards around her castle) I realized that she was really saying:  "guard" and just rushing through the r sound.

So apparently she's giving her brother palace guard duty instead of prince duty this week (her teddy bear, named "Patrick Bear" has taken over the roll of prince since she can dance with him).

For more Quick Takes, visit Conversion Diary!
Posted by Cammie Diane at 10:51 AM