Are You Ready to Sign Up For the Draft?

Deep breath.  Many of us suspected that this was coming.  I wasn't sure anyone would be prancing around proclaiming that it should happen now, but I can't say that I'm really surprised either.

I woke up this morning to read this article about people who are fighting to make sure that the women in our country have to register for the selective service.  But don't worry, they assure us.  It's not like we'll actually call them up.  It's just fair.  I mean we're the same now.  So why wouldn't you send you're girls out to register.  Since they're the same as their brothers they have the same obligation to fight and die in the name of our country.

Now I feel compelled to start off with a little personal history.  In 2005, shortly before I met Paul, I was thinking of joining the military.  Two things held me back at the time.  The first was that I was in the middle of a 13 month hiring process with the CIA and I was waiting to see how it would play out (where I was offered a job that was ultimately rescinded around the time I got engaged).  The second thing holding me back was this:

I don't know what the rules are now, but back in 2005 a neck tattoo disqualified me from even enlisting in the Navy, Air Force or Marine Corps.  The Army would have taken me, but I had my little heart set on the Navy and so, when I met Paul that year, I had undergone two laser tattoo removals (let me say that taking off a tattoo is more painful than putting it on...).

And that little tattoo, that mistake that I thoroughly regret and feel idiotic about (I have other tattoos but they don't make me feel as stupid because they're not on my neck... kids take it from me and never, ever, ever get a neck tattoo...) is the main reason I was around to marry my husband and start a family with him (I guess I shouldn't hate it that much, since it, in effect, made the life that I love today possible).

So I can understand the desire to serve one's country.  I was all for the idea of women in combat.  At the same time, other types of personal experience had to make me wonder, if I was truly honest with myself, about how capable I was of keeping up with men who I could clearly see, had a natural advantage.  I was in pretty great shape back then.  I could easily swim two miles without stopping.  I could bench press quite a bit more than my own body weight.  I worked out for hours every single day.  But I was also a black belt in karate and one thing my years of training had showed me was that men with quite a bit less experience and skill often still had the upper hand when we were training, because their natural strength and speed was superior to my own, despite my hard work.  Which was frustrating.

The thing is, no matter how much certain people wish away this fact, it still stands: men and women are inherently different.  Men generally have a great advantage when it comes to innate abilities that come in handy on the battle field.  I think it's ridiculous to expect to be able to draw from a random pool of women across the country and, even with extensive training, expect them not to hinder a combat unit.

We aren't the same.  Writing laws that say that we are won't change that simple fact.

More than that I think it's incredibly stupid to take away from women who are in their prime child bearing years, during this hypothetical future situation, and put them on birth control and put them on the front lines.  That ought to do wonders for future generations.  Especially when we're already below replacement levels.  Let's further decimate the number of children we have growing up to support our retiring workers.  That sounds like an awesome idea for economic stability.

Now I'll pause so you can read some highlights from the actual article that started this rant:

"The Obama administration's recent decision to lift the ban on women in combat has opened the door for a change in the law that currently compels only men between age 18 and 25 to register for a military draft, according to legal experts and military historians.
Never before has the country drafted women into military service, and neither the administration nor Congress is in a hurry to make them register for a future call-up. But, legally, they may have no other choice..."

"...Groups that backed the end of the ban on women in combat also support including women in draft registration as a matter of basic citizenship. Women should have the same civic obligations as men, said Greg Jacob, a former Marine Corps officer and policy director for the Service Women's Action Network. "We see registration as another step forward in terms of equality and fairness," Jacob said..."


"..."You can't pick and choose when equality should apply to you," Hegar said. "Making generalized statements like, `Women are capable of being in combat' or `Women are incapable of being in combat,' are equally ignorant. People are either competent or they're not competent."..."
"...Rep. Charles Rangel, D-N.Y., has made several attempts over the past decade to reinstitute the draft on the grounds that a small fraction of U.S. citizens are bearing a disproportionate burden in fighting the nation's wars. But his bills have gone nowhere.
That hasn't stopped him from trying. Just this month, Rangel introduced another bring-back-the-draft bill that also would require women to register..."

In fact I absolutely believe that I'm innately unsuited for military service or war.

You see, I can flip through any of dozens of pictures of me standing next to my husband and it is abundantly clear that one of us would be more suited to the conditions of war: 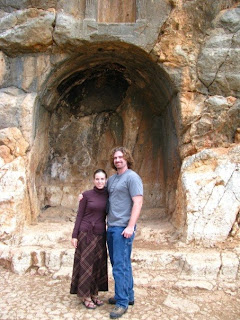 We are of equal worth in God's eyes, but it's perfectly clear that physically we aren't the same.  And I just can't understand how anyone could think that this idea would make our military stronger.

The idea of sameness as equality has run amok.
Posted by Cammie Diane at 9:34 AM