Last night Sadie and Paul left just before bedtime so that Sadie could go see her first hockey game.  A while back I'd found $6 tickets to the game and had completely forgot about them... until a few hours before the game.  Thankfully I remembered and called Paul and he came home early.

Sadie insisted on wearing her green velvet dress, over her pants and under her jacket since it's "Spartan Green."  Here they are on their way out the door. 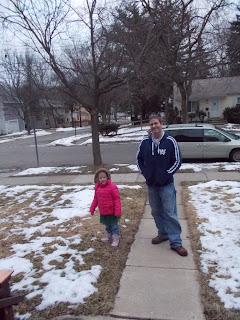 Patrick was thankfully asleep in his bassinet, so I got some one on one time with Mae.  We popped in a Dora DVD, did piggie back rides around the downstairs and cuddled on the couch when she wasn't too busy hopping around the living room.

When it was time to go upstairs to bed I was putting up the gate to her room (so she doesn't go downstairs at night) and she came over and closed the door and tucked herself in (actually she probably played for a while first).  She is little miss independent. 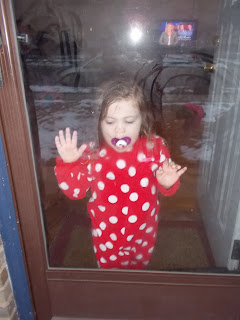 Sadie and Paul had a great time at the game!  Since she's been at the rink most weeks she's seen a lot of hockey players walk by with their gear.  It was neat for her to finally see a game! 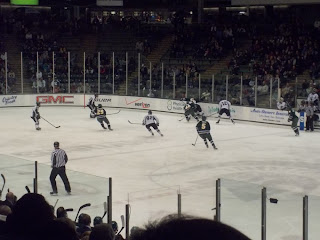 Here she is bundled up and watching! 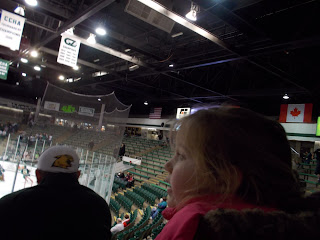 And here she is with sleepy eyes!  After a little over an hour she was so sleepy that they headed home!  But she had a great time!  Maybe next year we'll all go as a family!  I think Mae would enjoy hockey... or really any full contact sport... 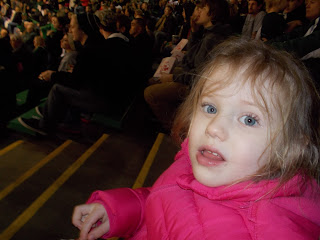