Yesterday might very well have been the best day of Sadie's entire life.  Can you guess why?  Here's a clue:

We were running late yesterday as we hurried through the snow and then into the crypt at the cathedral, the silence meeting my ear in the hallway before we turned the corner and could see that Mass actually (thankfully!) hadn't started yet.

Then I realized that it was Saint Blaise's feast day and that the line going up to the kneelers (after a brief moment where I thought "we aren't that late, are we?") was for the blessing of the throats.  I whispered and asked Sadie if she would like to go up to be blessed and she whispered back "yes" enthusiastically.  As we approached the altar I whispered a second time, telling her that she would need to kneel like a big girl on the kneeler. 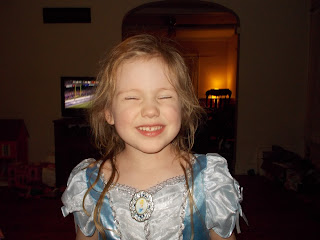 Which is probably when the excitement just about overwhelmed her since she's pretty much been waiting to kneel on her own kneeler next to me for the past two years.

So she knelt next to me and received the blessing with a candle just like the one above (I'd never seen one like that before!).  I think she crossed herself all of three times while kneeling there.  Then it was Patrick's turn for a blessing, still in the Moby Wrap, and I gently hushed Sadie as she started to say:  "Excuse me, excuse me, that's my little brother and..." her voice trailed off beneath my quiet "shhhhhhh" although I imagine her next words would have been "he's too little" because clearly in her mind this was a very, very big girl thing to be doing.

Of course that meant that she renewed her efforts to receive the Eucharist when communion time came around, tilting her little head back and sticking out her tongue hopefully.

Only three more years kid.  You're more than halfway there.
Posted by Cammie Diane at 7:17 AM

Email ThisBlogThis!Share to TwitterShare to FacebookShare to Pinterest
Labels: Mass