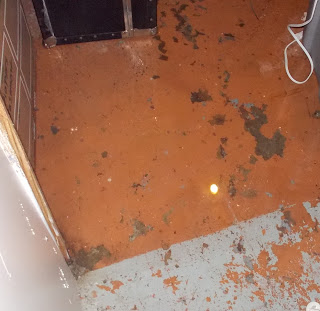 The plumber just left.  And his answers... well... I'm not wishing there was a leak in the main water pipe, just above the floor where it looked like water was coming in.

Because he said one of two things are happening.  Either a) this is group water welling up out of the ground flooding the basements and the solution is to get everything off the ground because this is going to happen every time it rains or b) the water main is broken underground outside of our home... but we won't be able to tell until it stops raining and if water is still coming up into our house after it stops raining, then we'll know it's the water main outside.

Um... okay.  So last I heard it's at least raining through Monday.

At least I saved the books, right?  That's something, isn't it?

(Update on Quick Take #5, because our land lord is great!) 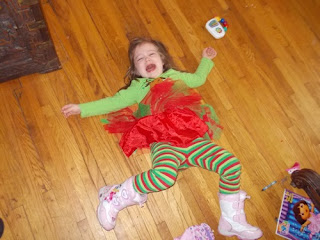 Maggie is having a crazy party this morning.  We let her have something that had wheat breading in it and the crazy has been amped up by that apparent misstep, that occurred when I was like: "I've been moving boxes all day, and we're out of food because tomorrow is shopping day, and we don't have running water, so please just pick up some chicken nuggets and everyone make as little noise as possible!!!"

And no, I didn't feel particularly good after having fast food for the first time in three months, and no, I'm not planning on doing it regularly, especially when my living room suddenly becomes crazy town with someone crying because this button doesn't look like it's buttoned right (it was), but it's a little crooked because that same someone has been yanking on it for the past half hour trying to make sure that it is still buttoned, while looking for something to cry about.

I wish I could figure out a way for the ground water to well up and water my seedlings an appropriate amount (although I guess that won't work with the heating pads they're on...).

Has anyone else been watching the news lately (yes, I watch the news... no, I'm not going to stop... even if it makes me feel seriously disheartened about the state of the world for five to ten minutes after it's over...), and wondering what is going on with the world these days?  I know that people will say it's always like this, and coverage is just better, or something like that but really?

First the horrible serial killer abortionist trial is so stomach turning... and then someone in the UK proposes that sex offenders have served their time and should be allowed to adopt or be foster parents (with screening but still... it makes me feel a little ill...)... and the string of rape related news reports of young girls assaulted at parties and their subsequent suicides that are all over front pages at the moment... but MSNBC says things will be better if we remember that our children belong to the community, although somehow I imagine that my idea of the "community" that my children belong to doesn't match up with their idea of community.

Since I wrote #1 our land lord called and told us that this doesn't happen all the time and it sounds like it is the water main and she's called the light board and they should be here today to see if the water main is broken outside.  I'm so, so thankful for her.  She has been such a great land lord! 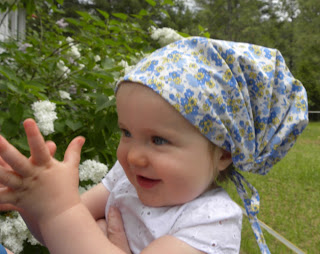 Sometimes I think that world of copyright and licensing has gone a bit too far.  Like, "here buy this licensed fabric, but don't you dare make anything with it to sell, even though you paid $17 a yard for it, because even though you bought it we still control what you can do with it" far.  And then I see this and I know that it's gone way, way to far.  So Fox owns all orange stripey hats with ear flaps and pom poms on the top?  Even if you designed the knitting pattern yourself?

Can I write a story with a blue tie in it and say I own rights to all the blue ties in the world and if you sell one you owe me licensing fees?

Fox if you didn't design that knitting pattern I have no idea how you can claim rights to that hat... and since they're all different and you didn't...

Do you need to laugh now?  I know I do.  And I laugh every time I watch this.

Sneezing is apparently very funny in our house:

And please say a prayer for Jen from  Conversion Diary and her new little guy Joseph.  And then head over to Camp Patton for today's Quick Takes!
Posted by Cammie Diane at 11:58 AM