We start our family rosary out each night with an act of contrition.  Sadie was cuddled up beside me as I said the prayer aloud when suddenly, mid prayer, I heard her say in the funniest little voice:  "I fear the pains of hell too!"  I had to stifle a laugh because she said it in the same way you might say, "I love that band too!" or "That's my favorite movie too!" and not at all in a way that actually expressed fear.

Patrick has reached that age where he really, really doesn't want to go to sleep.  Once he's asleep he sleeps for around 9 hours... but going to sleep?  He thinks he should be aloud to stay up all night long.

The conversation goes something like this (and the disclaimer before I start is that no, he's not sleeping in that little bassinet... I snapped these pictures when we were sitting around waiting for Daddy to get home with his prescription last night, but since they sum up our night time conversation so well I thought I'd use them to demonstrate what happens when I put Patrick down.

Me: (leaving the room... returning to the room at the sound of a scream) "Buddy.  You need to go to sleep.  It's night time!"
Patrick: 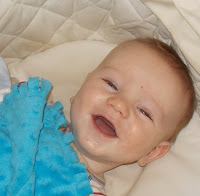 Me: (returning again, after a particularly loud yell) "Honey, Mommy needs to work.  I have orders that I have to send out tomorrow.  You've got to go to sleep."
Patrick: 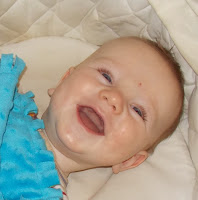 Me:  (after being called back again)  "Patrick we already did our story and our song and you've eaten and been changed.  It's time to sleep."
Patrick: 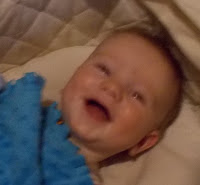 Yes, he's mastered the art of crying to get me to come upstairs to check on him, and then grinning when I walk into his room...

Keeping Quick Take 2 in mind you can imagine the momentary glee that flitted through my mind when the doctor said, in a worried tone:  "Now there's a medication that I really want you to give him every night.  It's very safe and I believe it will help him a lot. But there is one side effect. It will make him very sleepy.  So you'll give it to him at bedtime."

And in an equally serious tone I managed to agree that it sounded like a good idea while internally doing a little happy dance because maybe the newly lengthened bedtime routine won't take up two hours of the time when I really, really, really need to be sewing orders.

Last night Patrick took his new prescription allergy medicine... and went straight to sleep the first time I put him down.  And he woke up with happily clear skin this morning!

I mentioned Sadie's horrible car seat flame retardant allergy to the allergist and he wasn't surprised at all.  Apparently it's not that strange a reaction to have to the chemicals they use on those things.

I'm anticipating my power bill with ever increasing dread.  It's doubled since we arrived here, which is odd since our house is heated with gas (and the gas bill hasn't been nearly as horrible as I expected it to be).  So I inspected to bill to find out where all the increases were being made.  Our power use had gone up slightly (I imagine since we've been inside a lot since it was so cold) but not by much.  Our water portion had stayed the same.  And the sewer portion?  It had skyrocketed.  There was a little note that said something along the lines of: "your sewer contributions help keep the sewer system working." Apparently roughly $80 of "working," alongside a $20 water bill (the water fee, at least, seems reasonable).

Oh and if you're in an accident and the fire department responds you'll be getting a bill for $250 and if they have to pull you out of your car it will be $500.

I'm not sure I should watch the local news any longer (I try to turn it on for the weather report)... every night they seem to announce a new city fee.

Since I've been sewing so many fluffy fabrics I've come to the realization that even bi-monthly sewing machine cleanings are not enough... because I believe I cleaned my machine about two weeks ago and yet day before yesterday I broke it open to find this: 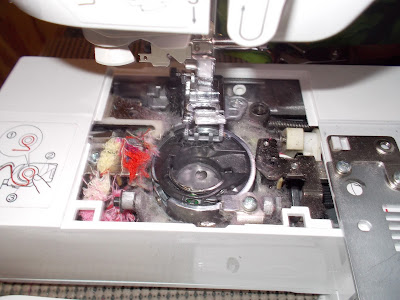 In desperate need of being cleaned out again.  I guess it makes sense.  I'd say I'm averaging five hours of sewing a day, seven days a week...  She is a good little sewing machine to stand up to that type of use for over a year now.

I think it may be time for weekly cleanings to keep her running though!