One Snow Flake... And My Crazy Birthday Wish! 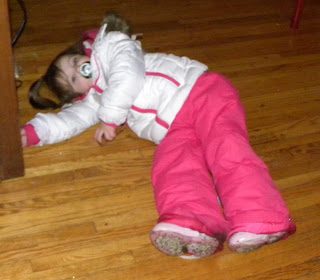 Yesterday I woke up and squeezed my eyes shut and then opened them and made a point not to look out the window.  Then I said a little prayer.  "Dear God, if I can have one thing for my thirty first birthday can it be no snow?"  I peeked outside and was greeted by dreary gray.  Okay, I thought, I can handle dreary gray.  I can handle a high of 37.  It's above freezing.  "No snow though!"  I found myself repeating.  "Not today."

It's not that I'm totally done with the cold weather.  It's that I'm done with one day of almost 50 and then 4 days of 20s that barely creep up into the 30s.  It's the up and down that's driving me crazy.  On the almost-50 day I have spring fever and wear three quarter sleeves and am ready to get outside and work in the yard.  And then I wake up the next day to solidly frozen ground.

Don't get me wrong. I remember complaining bitterly last year because it was 80 degrees in December in Florida.  I do prefer cold winters to hot ones.  But I'm also really, really ready to get out in the garden and get these kids out of the house! 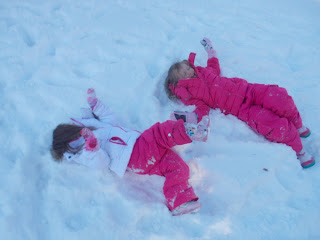 The weather man cheerfully told us last week that it had been over 120-something days since the temperature had hit 70 and that that day was unseasonably warm.  Basically for the whole of Patrick's life it has been below 70.  Way, way below 70.  Like 40-50 degrees below 70.  And in case we needed any further reason to resent winter:  "Last year on this day it was 60 degrees warmer than the high today" (that was earlier this week).  "Don't pack up those winter clothes yet!" I've heard several times on the local news.  "This weather is here to stay!"

Alright.  I know it's not.  It just feels that way.

And the drought updates alongside the cold alerts?  That drives me up the wall.  Not only is it cold, but it's cold and dry. 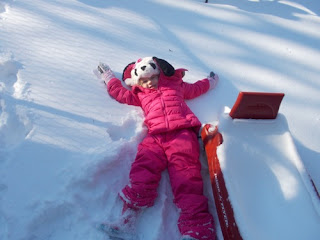 So I went upstairs to see why Patrick was fussing last night.  He'd already been asleep for about half an hour and I found him, in his crib, wide awake, staring out the window crying.  And I imagined he was crying for the same reason that I then felt like crying (okay, not really... that may be a teensy bit dramatic).  The sky was full of whirling white snow.

After hushing Patrick I raced back downstairs and announced, in a maniacal tone that instantly had Paul looking at me like I was crazy: "I asked God for one thing, one little thing for my birthday!"  I threw open the curtains.  And there was... nothing.  It apparently wasn't snowing on the north side of the house.  "Wait, you'll see!" I said, while Paul really wondered if 31 was the age that I just crack at.  I raced over to the downstairs windows on the west side of the house.  The side with a whirling blizzard (slight exaggeration... but really... the snow was "swirling!!!") going on upstairs.  A single snowflake drifted down in front of us.  "It's... It's... It's..."

"It's really, really snowing upstairs!!!" I insisted, while Paul looked at me like I'd confirmed that I'd lost my mind.

Whatever.  It was snowing.  At least it was upstairs.

I did successfully make a gluten free egg free pizza (with olives, mushrooms and onions, which happens to be my favorite pizza in the world!) and a gluten free egg free carrot cake.  It was a half fail though, because I was hoping that our xanthan gum was okay (denial, I know), since I'd been eating it before and Patrick had been fine for an entire month... so I was deluding myself into hoping that maybe this particular xanthan gum was corn free... only to have an allergic baby night last night (probably the real reason for the crying).  So xanthan gum is officially out and I will be mastering arrow root starch and eventually guar gum, when I finally find some (hopefully before I blow through the shopping money for the month... that is shopping goal #1 for April).  I'd just gotten used to the xanthan gum and had gotten down exactly how much to use.  Oh well.  This has been quite the baking adventure!

Now to go make sure the babies haven't overwhelmed Daddy while I was typing this post... And in case you were wondering (I know, you're not, but I'll share anyways), I woke up to a frosty winter wonderland outside (not snow, just solid frost!).
Posted by Cammie Diane at 8:52 AM

Email ThisBlogThis!Share to TwitterShare to FacebookShare to Pinterest
Labels: Weather