Yesterday after Paul got home from class, Sadie and I hopped into the car and headed over to the local Catholic store.  We hadn't made it there yet, in the nine months since we've lived here, but my brown scapular had finally kicked the bucket after two years of wear, and I was looking for  new one.

As we got out of the car (Sadie in a princess dress with short sleeves) and stepped into the 60 something degree air Sadie looked at me and said:  "It is hot!  I'm practically melting like snowman here!"

Perhaps this should have warned me that she was in particularly fine form.

We entered the store and she instantly gravitated to a small Saint Therese statue and began to explain that she absolutely needed this little statue, and that we needed to be careful that Daddy didn't bump it when he was walking by and knock it over and on and on and on.  I consented to the addition of the tiny statue and we began to look around the store.

It was quite lovely... Then Sadie saw the first communion dresses and veils, hanging in a row.  The discussion, which we've had so many times, began again.  No four still isn't old enough.  Yes they are very pretty.  No I'm not buying one.  Yes those dolls are for girls making their first communion.

As I shuffled her out of the first communion section are and guided her over to the saint cards I smiled at her passion.  Five minutes later we moved from the saint cards to the crucifix section and found the brown scapulars.  I picked up two, since Paul's is disintegrating also, and began to walk towards the counter. 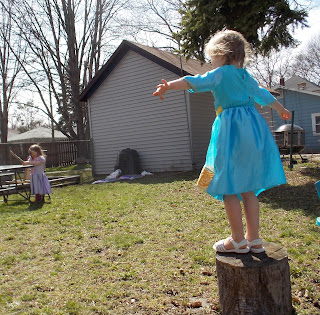 "Don't you think I'm old enough for my first communion?"  She said to the man at the counter, apparently trying to enlist help.
"Not quite yet," he said with a smile.  "What grade are you in?"
"How old are you?"  I added and she proudly held up four fingers as she answered.
"So you're in preschool!"
To which Sadie replied that she was not in fact, in preschool, but that she stayed home with mom (I was beginning to see that she was just a fount of information for the day).

As I placed everything on the counter Sadie launched into her nun monologue.  "When I grow up I want to be a nun.  I want to marry Jesus!"
"You do?"  He replied kindly.  "That's good because we need more nuns!"
"I want to be a nun and serve God.  I want to do what God wants."  The monologue doesn't stop there. It went on and on.  She shared that she wants to be a Carmelite "just like Mary Therese" although she didn't use her latest favorite phrase, which she's learned from her books and has been repeating around the house.  She'll look at me wistfully and say in the most romantic tone you've ever heard: "Mommy..." (insert sigh)  "Mommy, I want to enter into Carmel..."  (add another sigh).  She told him her sister should be a nun too, but not a Carmelite.  "She should be a nun that wears black..." she said and then launched into an explanation about how Mae had gotten her nun dress dirty when they played outside.

I explained the firmly requested nun third birthday party and that we'd all been rather surprised at how long she'd been proclaiming her dreams of being a nun.  And then we headed back out to the car, where she kept repeating: "I want to serve God. I want to please God..." and other sentences of that sort in day dream-y sort of way as she starred out the window.

Then it was home to do yard work, with my little princess pining away a few more years until she's finally old enough for her first communion.
Posted by Cammie Diane at 8:06 AM