The End of the Year!

Paul finished his last class for the year yesterday.  I should be excited, yes?

And I'm not even taking them.

Then there's the storm that's supposed to be arriving today and flooding my basement for a third time.  I'm also not totally thrilled about that, although if I had to choose between flooding and finals I would take flooding any day of the week.

Actually, despite the flooding and the finals, I'm in pretty good spirits this morning.  Paul brought me home a package of licorice last night, so it could be a sugar high.  Or the copious amounts of sun we soaked up yesterday while counting cop cars (I noticed we average one driving by approximately every ten minutes) before Sadie began to beg we go inside because 60 degrees was "too hot."  Or the amount of laughing I did while watching Mae.

Mae was in fine form yesterday.  She insisted on wearing her brother's 18 month super man shirt and cape.  You know the one that looks like this on him: 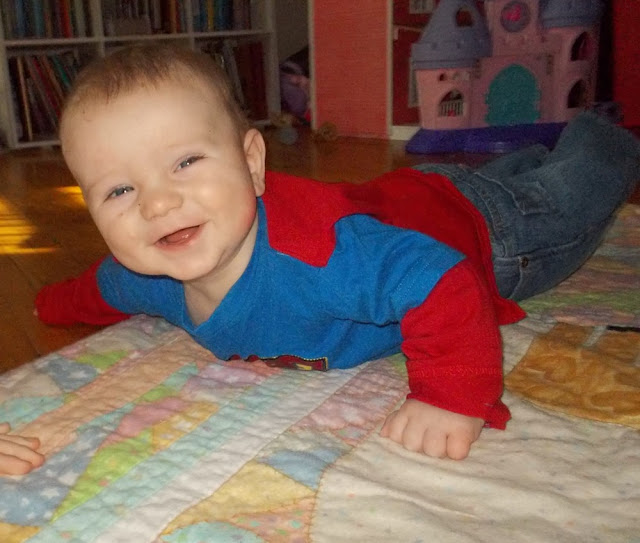 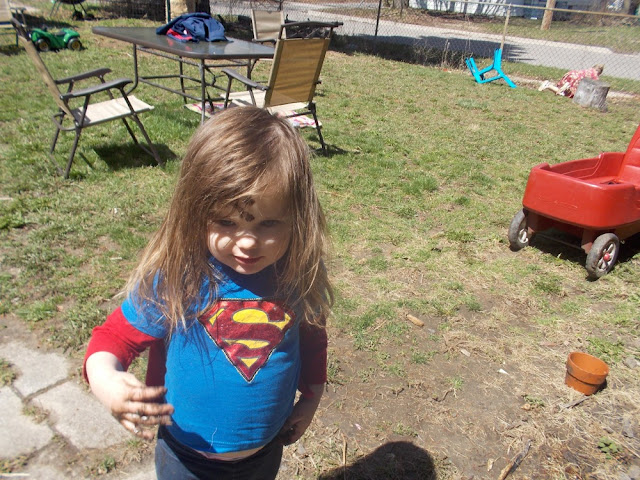 She also followed me around trying to eat the onion sets I was planting and then dug one up after I was done.  I believe she ate that one because it disappeared before I could even stand up from where I was sitting with Patrick.  She found some water in a planter and made a mud puddle.  Oh and she did something so naughty that I won't even mention it here because of the potential for future embarrassment on her part.

I also felt kind of silly, sitting out in the garden with a silly grin on my face, when I reached in my pocket and found these: 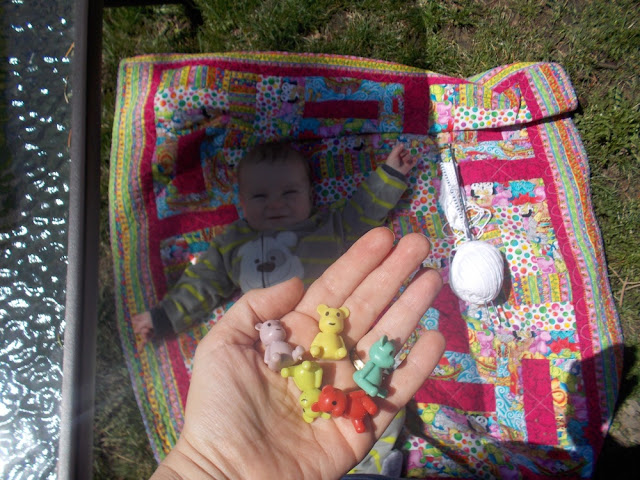 The jacket, which I haven't worn in a while, apparently accompanied me on the weekend Paul proposed all of seven plus years ago.  Because I remember lining those up on the table after getting them out of one of those little toy vending machines when we went out to pizza on our way home from the beach and stuffing them in my pocket, and now every few years I run across them and end up with a big goofy grin, before I put them back in their little zippered compartment to find again at some later date.

Now to go downstairs and pack Paul a lunch so that he can disappear into the library until dinner time, and then again until all hours of the night.  Do I dare hope it doesn't rain today?  More outside time would be nice... as would less water in the basement!

If you have a moment for a "let law school finals go well" prayer I know it would be greatly appreciated.  Since I know the "fast forward button" prayer probably won't work...

Two more weeks.  Then we'll have five years of graduate school under our belts with one more to go.  Go... go... go...  I'm so ready for graduation!
Posted by Cammie Diane at 8:45 AM