Do Our Children Belong in Church?

Calah wrote a post yesterday which may very well be my favorite post she's ever written.  It involves a hot topic for certain portions of the Catholic world and was written in response to a letter and the slew of comments that followed over on Deacon Greg Kandra's blog.  Here's a highlight (although really go read the rest... the whole thing... because it's really worth it):


"Our faith, people, is not about a place, like the synagogue. It’s about a person. Christ. That’s who we go to see on Sundays. Christ literally said, “Let the little children come to me.” He didn’t say, “unless I’m in the synagogue, or in Mass; then, keep them home so they don’t disturb the people who are really trying to focus on Me.” Actually, can you imagine Christ saying that? Saying, “hey, those kids get in the way of other people praying, so keep them home” or “it’s selfish of you to want My graces for yourself when the presence of your children bothers some of your fellow parishioners. Wait till the kids are older until you come see Me again.” If you can, you know a different Christ than the one I know. I think we should take him at his word and let them come to him, in the same place he comes to us: in the Mass." 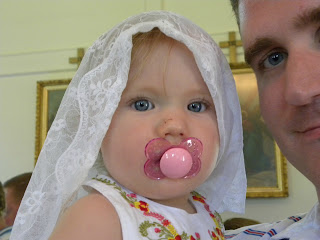 When starting to think about the post I was going to write here and what I wanted to add, I began by looking back over what I've written in the past about taking little ones to Mass.  The first thing I noticed was that apparently I write on the topic once a year.  Thought #2 was in response to my first post on the subject which was, "Oh look how cute!  I used to have a strategy when we went to Mass with one child and I thought it was difficult!" followed by hysterical internal laughter... because that child wasn't even Maggie so I didn't even know what it was like to wrestle a wild and crazy Mae Bae for an hour (or more).  The second post I wrote on the subject... well, when I brought it up and saw the picture I knew what it was about and started to get upset and decided rereading it probably wasn't the best idea and that it was better to say a prayer for a few of the rudest people I've ever met in my entire life.  Then there's my last post on the subject, which is was written around the time I began to realize how thankful I was that we do opt to struggle through Mass together as a family.

The basis of this post, however, will be the question that was asked in the letter that inspired this most recent conversation on the topic: "What do the parents get out of Mass, if anything, when they have to juggle a screamer?" 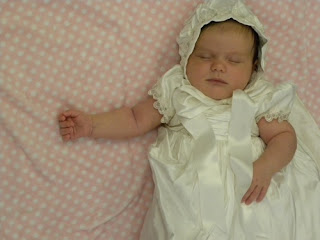 The answer for me, is quite simple:  The grace of the sacrament, at the most basic level.  But it is far more than that.

I've written pretty frequently about Sadie's hunger for the Eucharist.

I cannot even begin to believe that that passion would exist if she had never been to Mass.  I can't imagine that now, at the age of four, the child who won't stop moving, running, jumping, dancing, climbing would be siting next to be silently for 90% of the masses we've gone to, if we hadn't gone before this point and shown her that there are expectations for her behavior.

I also think of all the prayers for these children that I've brought into the world that would have been missed if we'd stayed away from our parish.  You see, Sadie and Mae were both born when we went to a small country parish back in California.  Many Sunday's they were the only children there.  People loved to see them.  They had a dozen grandma's, who missed their own little ones who were scattered across the country, and their faces would light up when they saw Sadie and Mae.  And they prayed and prayed for us.  They prayed through my pregnancy.  They prayed when the girls were born.  And they prayed as our girls grew.

I doubt our family would have been showered by the prayers of our parish if we'd simply disappeared when Sadie was born, because there is some truth to the statement "out of sight out of mind." 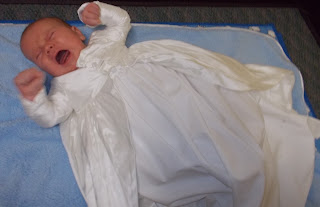 Is it selfish to want to raise our children surrounded by a community of faith and prayer, exposed early to the beauty of the sacraments?  Some, who are rather vocal in certain comment boxes, would say yes, it's horribly selfish.  Let me sit here in complete silence and keep your filthy brats at home until they reach the age of reason.  You're allowed to do that, you know.

I don't think that it is selfish to take a child to Mass.  I think that it's a gift on so many levels, that blesses the child, the family, the parish and the Church as a whole.

Yes, we should use common sense.  Yes, we should remove a screaming child.  I've spent many a mass in the narthex, in hallways, in the back, outside heavy doors shivering or sweating or basking in the sweetness of spring and autumn, depending on the weather.  I've whispered that this "isn't how we act at Mass and no I'm not putting you down and we'll come right back out here if you try that again, and yes you do know how to act!" plenty of times. 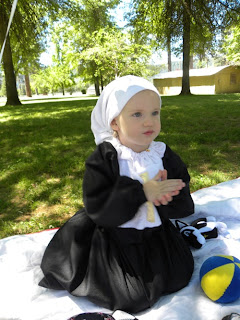 But I also believe we should welcome children into our churches with open arms.

Is Mae going to fall asleep and get an A+ for Mass behavior like she did yesterday?  Or is she going to spend Mass being held at the back, with a few trips outside to talk about behavior (thankfully that is happening less and less frequently).  Is Patrick going to sleep and smile through Mass?  Or will he have a full blown asthma attack and have to be taken outside into the cold?  Will Paul or I have an asthma attack?  Do I have my inhaler in one pocket?  Do I have two junior epi pens in my coat pocket, just in case things go really, really wrong somehow?

I try to imagine my life without the sacraments.  When people say "stay home until your kids are older" I wonder if the contraceptive mentality of our culture hasn't somehow seeped into their brains.  When will our youngest kids be "older."  Will it be in five years or twenty?  God alone knows the answer.

If I'd stayed away from Mass until our kids were "older" I wouldn't have gone in the past four and a half years.

And you know what else?  I don't think that hearing a child make a sound for a few moments is going to harm anyone, anymore than hearing the smoker's cough of the man who always used to sit next to me, reeking like smoke, even when I changed seats, harmed me back before we had kids.  Did it irritate me?  You bet.  It was even hard to breath.  But I tried my best to offer it up because I knew he didn't smell like smoke specifically to irritate me.

We live in a world where many believe that children no longer should even be seen out in public places, less they spoil the scene with their clumsy, grubby baby-ness.  We don't want children on our planes or in our restaurants.  They annoy us in the check out line.  It's only natural then, to expect that they not be allowed in our Churches.

As Christians we must reject this mentality.  We must reject a world that tells us that children should be kept in child designated areas and not allowed out to interfere with our hurried, hectic, adult focused world.

Above all we must take Jesus at his word and let the little children come to him.  For he is present at the Mass and I have seen firsthand how his presence can affect even the smallest of hearts.
Posted by Cammie Diane at 9:29 AM