Last night on the news they reported that a new law might soon be past that would require restaurants in our little city to allow dogs to eat in their patio dining areas.  Yes, you read that correctly.  Restaurants would be legally required to allow dogs in outdoor dining areas.

So....  It's okay to ban children from restaurants (and actually that doesn't really upset me.  I'd rather know if a restaurant doesn't want kids there, so that we don't accidentally stumble into a place that really doesn't want us there... signs are helpful...), but dogs have a legal right to be there?

Sometimes I feel like I live in a topsy turvy world.

I think this is from the whole There-Was-A-Squirrel-On-Mae-Bae's-Bed incident...  it didn't give her warm fuzzies about squirrels...

Today I'm going food shopping and I'm keeping my eyes open for a new food company who our family will definitely be supporting.  Eden Food's is fighting the HHS mandate. They're getting slammed by the media and by those on their facebook page who believe that saying that people should finance their own contraceptive choices is "an attack on women."

My personal favorite comment was the one where a self proclaimed "upscale progressive liberal" told the company how stupid they were to do this since everyone knows that only "upscale progressive liberals" buy organic food.  Apparently us conservatives, or people who worry about the impact of dumping estrogen into the water supply, or folks with religious beliefs, that don't allow contraception (who also don't want to fund something we believe is illegal) are too stupid to think much about what we put into our bodies.

The silliness is overwhelming sometimes.

My favorite part about Eden Food's is that they sell BPA free canned beans.  That alone would earn my devotion.  You see, beans are a staple here, and I like to have canned beans around for those times when I don't have time to soak them and cook them for hours.  And if your thinking to yourselves: "I don't know if anyplace near me sells Eden Foods" just click here.  We're surrounded by stores that sell them and I bet there's a good chance that you are too!

Okay, I wrote the first two Quick Takes last night before I got too sleepy.

I woke up this morning to see that a friend had just lost a little one and my heart is breaking for her and her family this morning.  If you could say a prayer this morning it would be greatly appreciated.  I know how much prayers helped pull me through when we lost our little one... 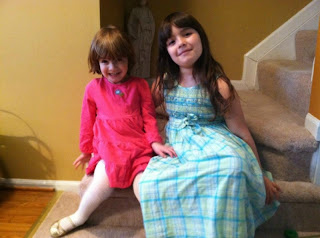 I don't usually share a ton of fundraising pages, but there are two this morning that I want to spread the word about from friends who would appreciate any help you can spare (even if it's a prayer!).  I'd personally vouch for either family, if you're in the least bit hesitant:

One of my friends is raising funds to buy an iPad for her daughter Natalie.  Natalie was diagnosed with partial Trisomy 13 when she was 9 months old and the iPad has programs that would allow her to communicate much more clearly than she can communicate now.  From the funding page:


"We know from pointing and following verbal directions that she understand a great deal, but in unable to convey emotions or more complex thoughts or desires outside of what she can point to or direct us toward (she will take up by the hand and drag us to the puzzle shelf, the pantry, or the back door to play outside). We began looking into communication systems after talking with her speech therapist. They are using a classroom communication device during speech therapy and seeing progress. However, for at home use, we do not have a device, and want to get Natalie a tablet with a speech program so that she has nearly limitless options, and so it is portable and easy for her to use (as opposed to the heavy, low-tech items used in her classrooms).

We witness her frustration daily, which comes in the form of crying and tantrums when she simply cannot communicate her desires and emotions. We have been blessed with the gift of a specialized speech application for iPad that comes loaded with 11,000 words, and has the ability to add an unlimited number of custom words. However, we do not have an iPad on which to use the application."  Read more here.  Facebook page here.

This is an awesome, awesome family who has been through so much this year and any help anyone can give will be greatly appreciated! 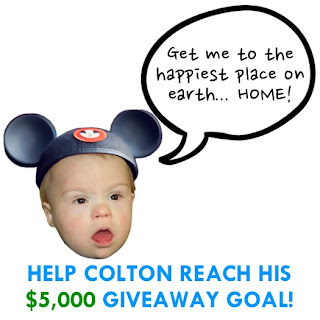 Kara from Catholic Kara is hosting an awesome giveaway.  She's raising funds to bring home Colton and you can get entries for the Colton's Happiest Place Giveaway by donating or by sharing the giveaway on social media.

And it's a pretty awesome giveaway.  First prize is four Park Hopper passes to Disney (land or world).  Second prize is a Disney Princess Wardrobe.  And the prizes go on!  There's even a quilt!

So even if you can't donate, sharing the giveaway will gain you an entry and help spread the word.

And if you can spare a moment say a quick prayer that Colton will be home in his Momma's arms soon!

And since the world seems a little bit extra crazy this week, and it seems like my heart aches every time I hear about the latest tragedy in the news, I'll leave you with another Patrick picture.  Because his smiles brighten up my day... and I figure this week could use more goofy, oblivious little baby smiles as we watch the evil unfold around us: 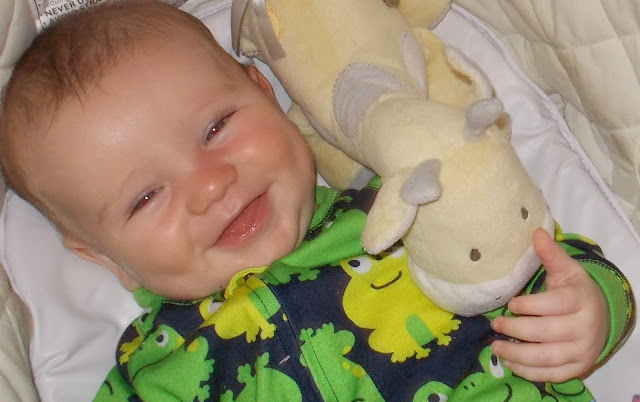 For more Quick Takes, visit Camp Patton!
Posted by Cammie Diane at 8:02 AM