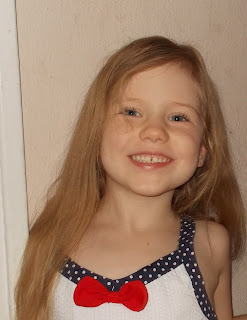 First an update: Sadie's last dentist appointment (the one after the bad one I wrote about earlier this week) went much better.  We had the same hygienist, but this time she was incredibly nice to Sadie and praised her over and over again about how well she'd done the day before.  It was a different dentist, and he came in and started talking with Sadie about nuns (when he walked in the room he said "I hear you want to be a nun!") and how when he was in school his class had gone to visit nuns at a convent.  Sadie giggled through this filling (which apparently was more like a seal since it was so tiny).

I'm especially glad we went back when we did because the place where she bit her lip was about three times it's normal size and he gave us a prescription for which I was especially thankful for yesterday, because without it (I won't get into details) I think we likely would have been begging to get in to see her doctor or going to urgent care (and that was after the first dose).  By last night, after putting an antibiotic/antifungal/allergy medication mix on it all day, it was looking a little bit better and I was no longer panicking every time I looked over at her.  And this morning it's almost a normal size.  Who knew that biting a lip could turn so bad so fast?

My poor husband, you see two days ago, in the car, on the way back from finding an entire new wardrobe for Patrick for $25 at the baby thrift store I held up a cute bright tropical print button up shirt and showed it to Paul.  Then we had the following conversation:

Not a post Paul, but I'll give you a quick take.  Oh, and I see that the product description for the Cubavera shirts at Macy's (I believe that's where yours were from) says Rayon/Polyester so it wasn't even sleezy cotton.  It was sleezy wannabe cotton.

Oh no my friend they were not.  Because cotton cannot feel that sleezy.  They were most definitely polyester parading as "cashmere" as the ad states.  Too bad there aren't any left to prove my point.  I kind of wish we had one in the house right now... 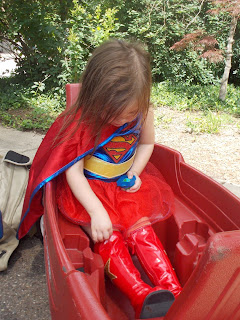 Maggie's outfit of choice these days is a headlamp from LL Bean, a diaper and her red super girl boots. She permits me to put her super girl dress or t-shirt on too... but that's pretty much it (everything else results in tears because of their lack of super-ness).

On that note: Potty Training Time has arrived at our house.  And it's times like this that I regret only having a bathroom upstairs and in the basement.  Having to run up or down a steep set of stairs is not going to aid this process (I'm really hoping we're through it by the time school starts back up in August).

Does anyone else feel like there are a lot of mosquitoes out this year?  We've been staying inside a lot because every time we step onto our lawn we get swarmed... and they don't seem to care about bug spray.

I've been thankful that people who I've talked to have said that this is a lot of mosquitoes compared to other years... because I was wondering if this is just how it is (since we didn't get to Michigan until August last year and when we arrived it was a dry year and we were eating outside in the evenings and not seeing any!).

Does it feel like there are a lot of mosquitoes (compared to other years) where you are?  I don't like hiding inside from them, but I like finding out I have 20 new bites after being outside for a bit even less!

And here's a glimpse of a moment of reading practice yesterday:

For more Quick Takes, visit Conversion Diary!
Posted by Cammie Diane at 9:03 AM