Patrick has a new passion.  My phone.  And my camera.  It means that it's easy to get a smile from him these days (at least when he doesn't have the phone) because he's plotting in his little head how to wrestle the camera away from me.  Here he is in one of the thrifted outfits I found earlier this week: 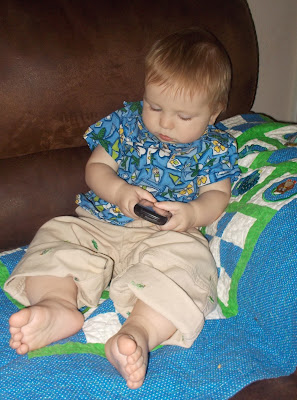 Maggie loves this headlamp... however... it creates drama.  She has a hard time getting it on just right and so, after untold tantrums over how it was fitting, I had to hide it, for the time being at least: 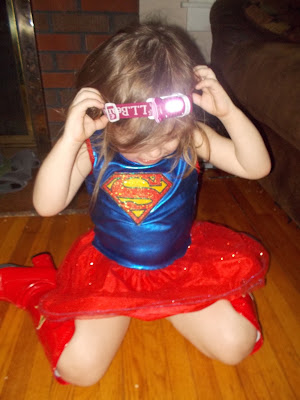 The high point of Maggie's weekend was her Mommy/Maggie shopping trip.  Like Sadie she had birthday money she'd been given to go shopping for whatever she wanted.

On the way to the store I had a little talk with Mae.  You see, last week we'd taken a gift card she'd been given to Target and walked down the toy aisles and she'd sat there, not picking anything out.  If I handed her something she'd either clutch it or push it away, but she wouldn't pick out toys, because she just wasn't understanding that she'd get to take one home (I guess that says something about how often we've gone toy shopping in the last few years...).

So this time I had a talk with her and explained that she had birthday money and that she could pick something out for herself.  This time when we walked in the store she was wide eyed, looking all around (and it happened to be some super sale weekend at Toys R' Us).  When we went to the Dora aisle she could barely contain herself.  She picked out two Dora pony sets (that were buy one get one 50% off), a soccer ball with little cones that was on clearance and a huge package of little plastic balls for her trampoline.  When she saw the little plastic ball package she actually started to cry because she was so excited.  As this picture shows she wasn't going to be letting them out of her sight: 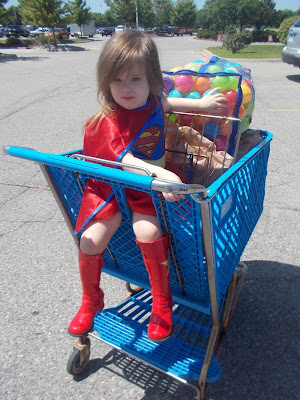 When we got home Patrick was waiting for us... he'd been playing with Sadie: 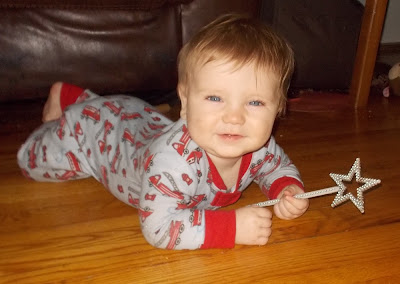 He made another mad dash for my camera: 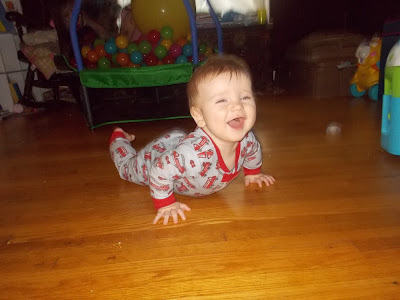 Then the ball fun began: 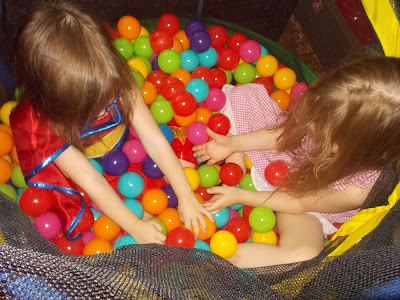 Here are the Dora horses: 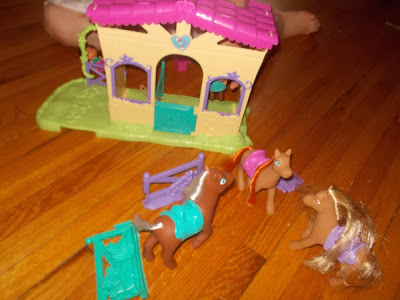 She was definitely a happy girl: 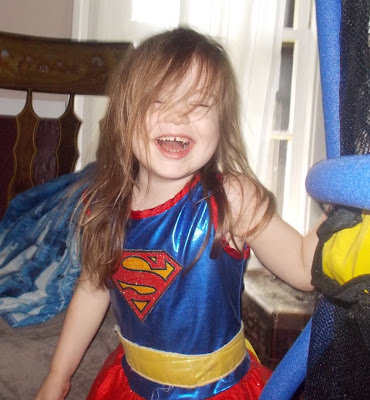 And of course, I had to throw in another Patrick smile: 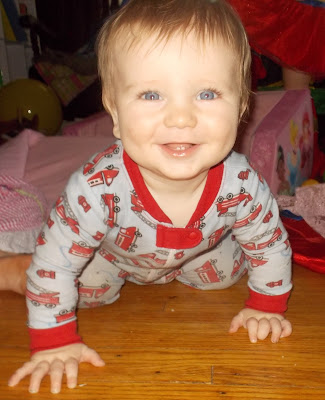 He hasn't quite got the crawling thing down, probably because of the hardwood floors.  He zooms around with this sort of seal slide and sees no reason to actually crawl.  Although he has experimented with a bear crawl: 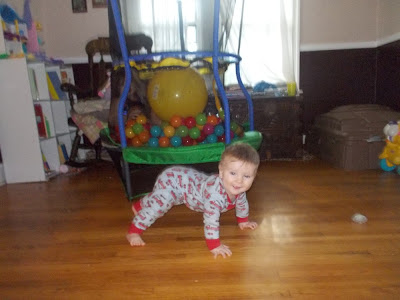 On Saturday morning it was time for swim lessons.  I took Sadie to a nearby park while Daddy did the Mommy and Me class since I had the beginning of a migraine (thankfully advil and benadryl saved the day): 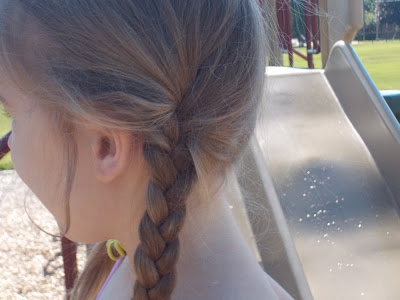 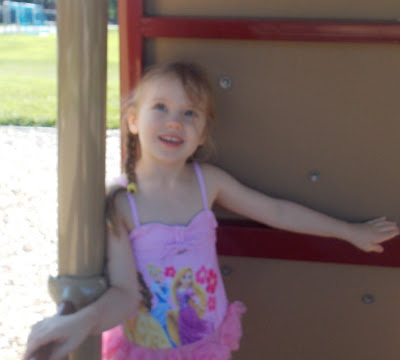 It was already pretty hot so we hung out in the little sitting area under the play structure: 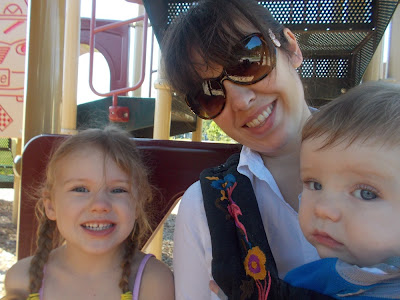 Then we ventured out into the sun: 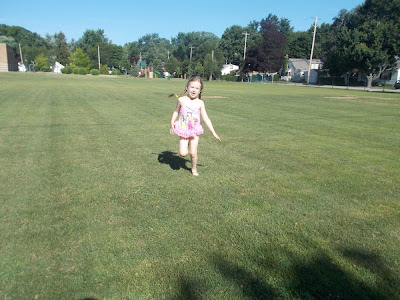 After swim lessons we went to the library (which involves a long story involving someone acting like Paul forged his school ID just to get a free library card... despite him having a license, school ID and a piece of mail... are library cards that in demand? I want to  ask: does that happen a lot?).

Patrick also accompanied us on his very first trip to McDonald's (it was quite the weekend): 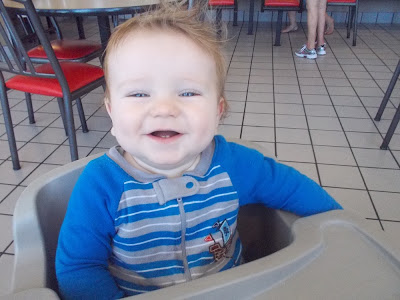 We had a hot but relaxing Sunday: 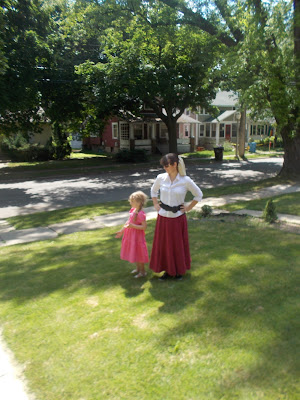 And I finally got the curtains I made up in the girls room, replacing the old brown blinds.  It really transforms their room: 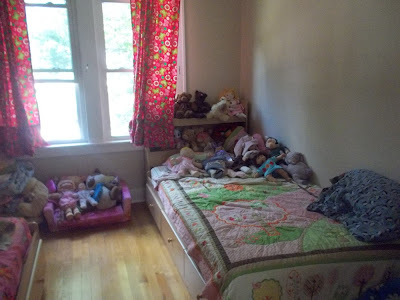 And Maggie got new sheets.  She apparently wasn't a fan of her old ones.  She'd strip the bed and the mattress cover and sleep on the bare mattress.  So I got a zippered cover and Dora sheets.  I expected a tantrum when she stripped off the sheets and found the zippered cover but... it never happened.  She loved her new Dora sheets.  So I found this instead: 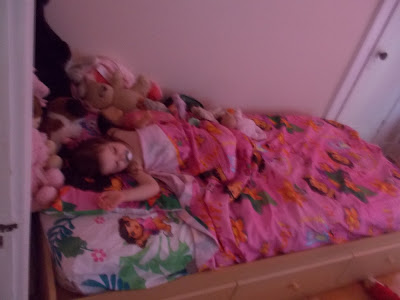 I don't think there's a link up this week, but I hope you enjoyed your glimpse into our weekend (okay, I know my Mom at least did!)!
Posted by Cammie Diane at 8:25 AM