What I Wore Sunday and My Mixed Feelings on "Cry Rooms"

This morning while I was at Mass, Kendra's post yesterday at Catholic All Year was on my mind.  It was the sort of post that I read and then ran into the other room to tell Paul about how I would pretty much be in tears if I'd been in her shoes.  As I jiggled Patrick and slipped out the back it came back to me a few times and as I headed back into Mass after the homily, when I felt like I was going to be run over by the stampede of people flowing out Mass, I thought of her words on cry rooms and how she said she'd like to fill them with cement.

I tend to agree (bear with me here). 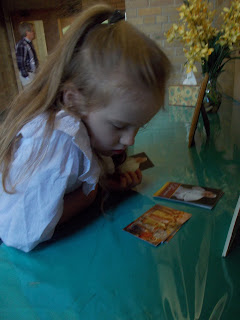 I have been in a cry room that was exactly what cry rooms everywhere should be... where the focus was still on the Mass and people followed along and participated and the expectation was that the children would be corrected when they were running amok, but in an area where the correction wouldn't disturb others.

But let's face it, that's not usually the norm.

Our current parish doesn't have a cry room.  It does have a narthex behind three sets of heavy glass doors which doubles as a sort of cry room for half of Mass... and I've begun to think of it as a cry room because it's treated as one.

These past few weeks I've gotten an up close and personal look at the narthex/cry room... and I've spent quite a bit of time thinking about it, so Kendra's post today (with a link up) about cry rooms was timely.

Here's how the narthex/cry room works at our parish from what I've seen this past month (and of course, it's in story form, because let's face it, pretty much everything I write is in story form):

Patrick has decided that he is no longer content to cuddle with Mommy during Mass and doze sweetly on my chest.  He's eight months old and he has plans that don't include sleeping from 9 to 10:30 on Sunday mornings any longer.  It also seems that he's decided that walking through the doors of the Church makes him hungry.  Ravenous in fact.  With his new interest in pinching me and yanking on my scapular while screaming to let me know that he's starving (even if he has eaten right before we left the house), I've found myself retreating out into the narthex a few minutes into Mass to sit on a staircase that's tucked back out of the way. 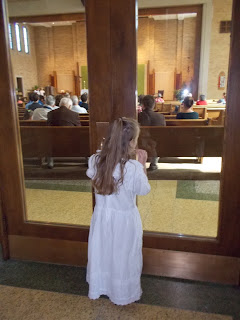 From my staircase I can still see and hear everything.  I'll sit, and grab my nursing cover and get him set up to nurse in the carrier and I'll sway back and forth and hope with all my might that he falls asleep quickly.  And by quickly I mean before the homily.

Before the homily things are peaceful in the narthex.  Patrick and Sadie and I are all alone back there (Paul's on his own wrangling Mae Bae these days).  We can hear the priest and I've actually heard more of the homilies than I'd heard in years.  Then the homily ends.  And the doors swing open.  And social hour starts.  A screaming toddler races past me.  Another follows behind.  Loud voices start talking about toddler development.  People are comparing milestones.  Kids scream, adults laugh, one man sat loudly humming Ave Maria last week and then broke out into song.

All the while I have my eyes focused on the altar.  I'm trying... so hard... not to be annoyed.  I'm failing.  I'm trying to offer it up... trying to focus... trying to pray... but I still find it's taking everything not to shake my head.  And I don't want to be that person.  Not at all.

Patrick is still nursing.  He hasn't fallen asleep in time to slip back into Mass before the hoards come rushing out.  Every time a child screams with laughter (which is like every 10 seconds because these children, who were sitting pretty well in Mass ten seconds earlier know that play time has arrived) he clamps down with his new top teeth... not quite biting... just squeezing in alarm at the very loud sound... and I wince.... but he's practically asleep and I really don't want to wake him up when he wasn't biting on purpose and unlatching him would definitely wake him up and put us back at Go.

You see I love seeing kids at Mass.  There's only one time when I really find myself getting annoyed... And that's when Mom and/or Dad check out and let junior have free rein.  Kid yelling while a harried parent tries to stop it?  I can relate.  Mom turning around to talk to someone else while little Sally lays on the floor and kicks the wall as hard as she can?  I find myself taking deep breaths and trying not to get angry.

We are still at Mass, right?  And why the exodus when the Liturgy of the Eucharist begins, when the kids aren't even misbehaving?  Is it in anticipation of possible misbehaving?  Or is it because it's cocktail hour on the Lido Deck?

Today I took Patrick and Sadie and we slipped back inside, the bulky cover still over us.  He wasn't going to fall asleep out there.  Finally, in the moderately quiet church, Patrick drifted off (I say moderately because shortly after he fell asleep a toddler crawled under the pew over to us and started beating her hands on the seat next to Sadie... but hey, I can understand not wanting to take her out into the chaos outside those glass doors either, because I didn't want to be out there and was silently praying that Patrick just stay asleep...  In case you're wondering... he didn't).

So I guess you could say that my feelings on cry rooms are kind of mixed.  I can see the point.  I'm happy to have a place to escape when Patrick's fussing (like the narthex).  I'm sure others feel the same.  On the other hand, I dream of a world in which cry rooms aren't a place of exiled craziness, where people think that they aren't at Mass any longer... because you are... and while everyone understands that it will be loud, I think that there should be an expectation that you're at least trying your level best to participate in the Mass, rather than turning to your neighbor and saying "how 'bout those Tigers?"

What do you think?  As you can tell, my thoughts on cry rooms aren't totally clear (and perhaps they're a bit jaded)...  And I pretty much have an internal battle with myself at each Mass, as I berate myself for getting annoyed because I know how hard it can be... I'm right in the thick of it... I understand... or at least I do at times and I try to the rest of the time... but I think that there should be at least some effort on the parents' part beyond simply standing there and talking while the kid runs wild.).

I apologize for my overuse of ellipsis... Oh no!  There I go again!  It's like a punctuation addiction.  At least I know I have a problem...

After all that rambling about Mass are you ready for what we actually wore today?


For more outfits and WIWS head over to FLAP.  For more cry room musings stop by Kendra's Link Up at Catholic All Year and see what's being said!
Posted by Cammie Diane at 4:08 PM