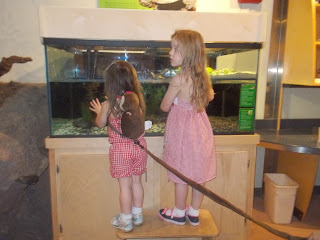 For the last two days we've been working on potty training with the most stubborn child on the face of the earth.  It amazes me that someone can sit on the potty every ten minutes and happily look at a Dora potty book and then only go in between those ten minute stretches between sitting on the potty.

Let's just say the last two days have been a little bit rough (besides the fact that I think she has a bad attitude all around since I've been letting Sadie fall asleep in the other room so she has no one to pounce on and torture until she falls asleep three hours after I put her in her room). 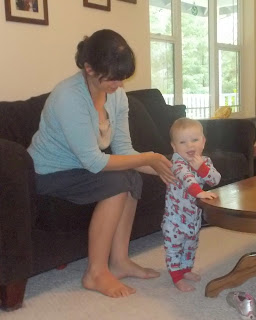 I'm waiting for a call back from a pediatric dentist specialist, who's apparently known for working with difficult cases (ie tiny kids).  We'd been told to go to her two times in two days, first for Mae, since our dentist wasn't really excited about taking on a patient who doesn't even like having her teeth brushed (although she does just barely tolerate it now).

But the other referral... that was for Patrick... and it came from the nurse at his pediatricians office after this happened:

After running wild through the house all morning a certain three year old had grabbed a blanket and laid down on the couch, apparently tired from her rampage (the kid has been doing really well lately... but these last two days... as I said above... just tough...).  Sadie was looking at a story book.  And I decided to lay on my side next to Patrick and play with him, because I was hitting that part of the afternoon before my second wind kicks in when I'm just exhausted.

He excitedly crawled right next to me and got up on his knees and practiced bouncing up and down.  Then grabbing on to my side he pulled himself onto his feet.  He was standing!  For the very first time!

Can you see where this is going?  How standing for the first time is going to lead to a trip to the dentist? 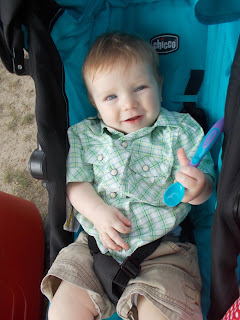 He practiced standing and kneeling and was climbing up my side and looking over the other side when suddenly he pushed with his little legs like he was going to stand up... but instead launched himself over my side and hit headfirst on the other side before I could even move.

I didn't now it was mouth first right away.  He screamed and I picked him up and started to nurse him since he was so upset and suddenly saw blood.  I think there was a split second when I thought I was bleeding before I realized that it was from his little mouth.  I tilted his head to the side and saw it was definitely him bleeding and I called Paul who was trying to study upstairs.

Paul came down and couldn't see his top tooth.  I felt a little woozy at the blood and the idea that he'd just lost his only top tooth.  I searched the floor.  No tooth there.  No tooth in his mouth.

Within ten minutes Patrick was Happy Baby again, ready to get down and play on the floor.  I called the doctor's office and talked to the nurse who said that they would like me to call the dentist.  And then, after getting a text message from Nani, who happened to be in a dentists office back in California, I finally got him to hold still while I looked and saw that there was in fact a little tooth pushed way up high in his mouth (and possibly broken... although it was really hard to tell because it looked funny and he wasn't really cooperating).


So now we're waiting for the dentist's office to call back this morning... 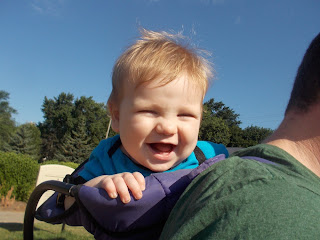 Thanks to everyone who answered the "when did your exclusively fed baby start eating solids" question yesterday.  I'll admit, I was getting a bit paranoid after going to my doctor's office and having the practitioner there act like I was doing something horrible by doing baby led weaning (as in the "he's going to be nursing when he's 10" comment).

I knew that she was wrong, but it still left me feeling unsettled about the whole thing, since Sadie was trying to stuff food into her mouth at 4 months and Mae was at 6 months.

Hearing that Patrick is totally within the range of normal by still just nursing (especially for a baby with allergies) makes me feel about a million times better... especially now that he only has bottom teeth...  So thank you guys!

My house is actually starting to look like a house again and not like the episode of hoarders it was transformed into during finals/craft fair time.  I'd been cleaning and cleaning and cleaning (and reorganizing, which is really why things were going to slow) and feeling like nothing was looking even near being done, when suddenly the upstairs was nearly done (the living room and dining room were never the problem).  Now I just need to finish the upstairs and then my sights are on the reorganizing the kitchen... and then... the drastic reorganization of the basement before the water table rises up into it again. 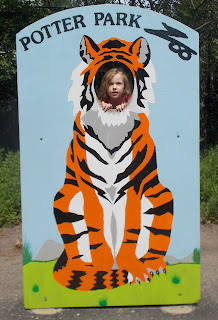 We just finished our fifth week of school and I started scanning a city website for activities and then filled a binder page with a list of museums, planetariums and activities in the area immediately around us.

There are university farms to visit, a museum with dinosaur skeletons (not bad for such a little city!), theaters (this year the Moscow Ballet will be presenting Sleeping Beauty, the Vienna Boys' Choir will be here, and Disney's Beauty and the Beast will be performing, all with student ticket prices!), two planetariums (which is good since Sadie is almost as interested in the planets as she is in volcanoes), a nature center, the Capitol and Supreme Court (and an old court house in a nearby town that looks like a beautiful museum) and a whole list of other stuff.

I'm planning on doing field trip Friday's this year and putting all the resources we have here to good use!

Now to make the meal list for the week, load everyone into the car for shopping (Patrick is so proud that he can sit up like a big boy) and stop by the library to pick up a new pile of books for this weeks reading.  I hope you have a great weekend!


For more Quick Takes, visit Conversion Diary!
Posted by Cammie Diane at 9:00 AM