I was pretty excited to get dressed this morning.

You see I stayed up until midnight last night sewing a new outfit.  Just before the clock struck twelve I started on the last seam, sewing a bit of lace along the edge of the neckline and then I heard Patrick, awake for the half dozenth time, start to yell.  I quickly finished the seam, put my sewing machine away so that Mae wouldn't find it in the morning, and hoped that it would fit the way I'd imagined when I got ready to go to Mass.

This outfit was an experiment.  It started as a dress, almost three years ago.  I'd finished the skirt section of the dress around the time I found out I was pregnant with Christian, and I put it aside, unable to decide whether to make it a maternity dress, or a post-baby dress.  I hauled it to Florida and then to Michigan, but I wasn't quite sure how to finish it and so it stayed on the back of a shelf.  I came across the bottom half of the unfinished dress the other day and quickly finished it as a skirt (three years of sewing means things go much more quickly and easily).  Then I decided to make a separate top that allowed for nursing (although not as easily as I would like... ) since a dress with the neckline I was imagining would make nursing impossible.

I didn't use a pattern.  I picked up a piece of fabric and actually started with the darts below the bust (I'm sure that's not the right way to do it... but it worked for me as I pictured it in my head, and then I went from there.  I tried it on as I went along and added godets in the bottom to give it a little flair outward that makes it fit well with the skirt.  I was tempted to add a scalloped neckline like a certain dress I'd seen on pinterest, but decided that, with the godets it was fancy enough and I didn't want it to be too busy.  I added more darts to bring in the waist to give it a bit more structure and finally decided on a sleeve length after some experimentation.  Here is the final result: 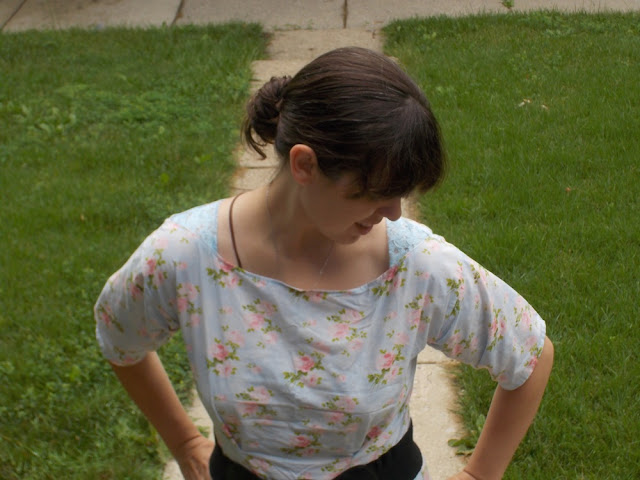 It's a little wrinkled after being squished under a baby carrier in Mass... but you get the idea.

I have to say, I am kind of in love with the fact that I didn't find myself tugging and adjusting it all through Mass because it was fitted, was long enough and there was no risk of it dipping too low in front even with tugging.  I think I'm going to try to make one dress a month with the fabric that I already have, until I have a small collection to wear for different occasions, because I'm really tired of figuring out how to make pieces that are too low or too short work (layer and layer and layer) since I always feel like the dresses that fit that are long enough end up being too low cut, and those that have higher necklines have itty bitty bottom sections.

This is my solution: 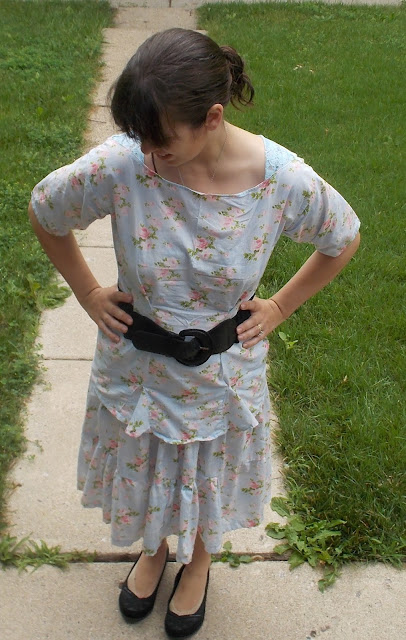 In other news, Maggie almost had a nervous breakdown this morning over the fact that her dress had a little cardigan that only had one button.  Do you know how much crying can go on over one button?  A lot.

She's now wearing a cardigan with a respectable five buttons and Dora clogs and the day has improved drastically.  This kid... what can I say?

Mass was 86 minutes today.  But who's counting?

Okay, I'll admit it, I was... at least when the babies were acting up (when the babies are quiet it can go on and on and I'm okay with that).  Patrick wanted to be with Paul, but Mae has decided she likes being with Paul (Mommy's popularity is at an all time low) and then Patrick was finally asleep, but Sadie kept accidentally bumping him since she was trying to cuddle up to me, and then he would stir and I would sway back and forth and hope against hope that he wasn't about to start screaming.  So while I was trying really, really hard to appreciate the beauty of the Mass I was also kind of like: "please let these little monsters get through this!  Please! Please! Please! Please!" in my head.

During the part of Mass when I wasn't stressing about a fussy Patrick, the priest gave an amazing homily on the importance of really making an effort to study and learn about God (and woohoo!  I heard it because Patrick quieted down!).  He talked about the Pope's new encyclical and asked how wives would feel if their husbands said "I really love you, but I don't want to know anything about you."  He expanded on that idea a bit and talked about how illogical it is to say that you're having a crisis of faith when you haven't made an effort to learn more about God.  He compared it to saying "I don't understand algebra!" while refusing to crack open an algebra book.

After the homily a missionary got up and gave an inspiring, heart wrenching presentation about the work his organization is doing in Haiti... and how there are always so many people to help and never enough resources.  Hands Together's donation page has a chart that lets you know that $25 can fill a water truck for water distribution and $50 can provide a homeless mother with a grant.  It definitely seems like a worthy organization.

In other news, no one melted down before the final blessing and Paul got quite a workout packing Mae around: 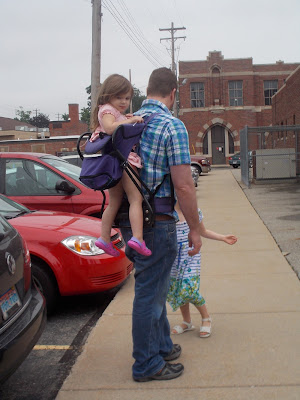 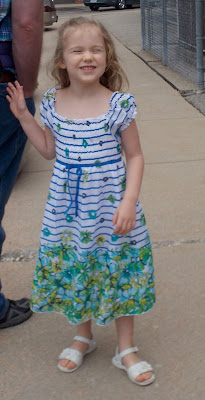 And Patrick got "dressed up" which is to say he wasn't wearing knit shorts.

I refuse to spend much on clothes that he wears for approximately one to two months before moving on to the next size (since he's chugged through 6 sizes in eight months and is now wearing 24 month outfits) and so jeans are the dressiest thing he owns at the moment since there isn't a holiday in sight. 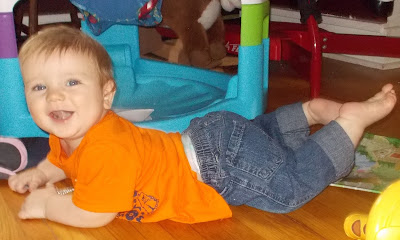 As if Paul didn't get enough of a workout packing Mae around at Church, the girls expected him to twirl them around, high up in the air when we got home: 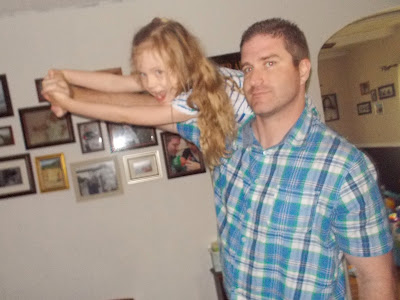 For more WIWS head over to FLAP!  I hope you had a great weekend!
Posted by Cammie Diane at 1:00 PM