What I Wore Sunday: Polka Dots and Stripes Edition

I thought I had my outfit all picked out for Mass today.  I got up.  I got dressed.  I got the kids dressed.

If you don't want to hear my July-is-the-month-of-bad-luck spiel skip the writing and just look at the pictures.

I'd even snapped a few pre-Mass pictures with my computer while going over the past month in my head because (are you ready for this?) the grand total of things that have broken in the fine month of July include: My new computer (falling down the stairs... hoping this one, with the f and m and h and t giving out limps along a bit longer!), the freezer (not actually broken, but it didn't close and we lost all the food and frozen meals in it, which was a lot, in case you missed that post), Cabrini (the 1999-oh-so-many-miles-on-it Town and Country that we're hoping can limp along for a few more years) who broke down and needed to be towed and repaired (involving the borrowing of money which I do not have right now) and then finally, the blow of all blows, my stupid camera.

Again.  For the second time this year (by the way don't ever. Ever.  EVER. buy a Nikon Coolpix S01 because not only does it take forever to take pictures and take horrible pictures but this is the second one we've had break since Christmas for no particular reason.).  We do have the store warranty and took it to Target only to be told they don't keep the warranties there in their computer system, and I need to go home and find the target warranty papers and call the number.  Only I can't find the stupid thing (which I saw last week and "put somewhere safe" while cleaning).  So here I am camera-less.  Which is not a great place to be when your business depends on taking pictures of things to sell online... especially when it happens the week you open a new shop and have a huge pile of quilts waiting to be photographed...  The quandary of how to photograph the things I'm working on to sell to solve these problems goes round and round in my head...

But... that's not really about what I wore, is it?  And really for all the whining I've just done (sorry about that... I just needed to get that out of my system... you can always skip the writing and just look at the kind of blurry pictures...) I haven't been that down about it.  My attitudes really been "what can possibly happen next" with a maniacal sort of laugh.  And I still have this old computer's kind of blurry distorted camera to use for WIWS posts.  And that's what this post is supposed to be about.  So here is my latest outfit. Or at least, it kind of is: 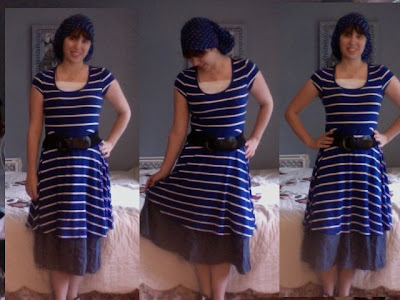 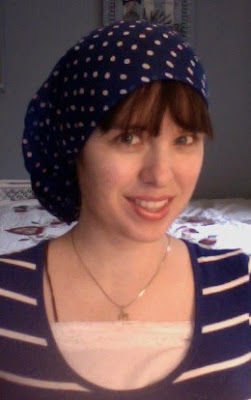 But then after Paul came downstairs from getting ready I asked him if he liked my new snood.

And he paused.  And looked away.  And said "Uh-huh."  Which is kind of like yes.

Of course I couldn't just let it rest at uh-huh.  I had to push for an enthusiastic yes.  Look at those polka dots.  Come on husband.  How can you not love polka dots!  (Hopefully you'll find this conversation funny.. I was laughing when it was going on.  At least part of the time):

Now husbands... Let's be clear.  It's sometimes best not to answer beyond the question you were asked. If you do you might have a painful conversation like the one below, which will just make everyone's head hurt:

Another husband note: criticizing/questioning your wife's outfit when she doesn't have time to change is definitely against the rules.

It led to a conversation on the way to Mass about which of us has better fashion sense (neither of us have much to speak of)... and I grabbed a cardigan and put it under my belt and have now decided that I did like the first outfit better, even if polka dots don't match stripes (and I had better pictures but this computer apparently ate them between when I took them and when I wrote this post, so this is as good as it gets): 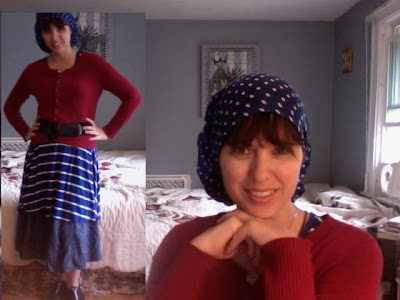 Oh and Mass.  We had a cardigan-button-incident which was when a button on Mae's cardigan was loose which led to an hour of on and off crying in the narthex over the offending button.

Paul just sent me upstairs to take a nap (because he can tell I need it at the moment...) and I think that's exactly what I'm going to do.  No worrying for one hour.  And I promise to be less whiny tomorrow.  I'll start making a list of things that have been good... like the wonderfully beautiful cool weather we've had!  And the fact that the upstairs is now clean (I'll add pictures someday, when there's a camera to take them!).