I'm pretty sure that soon I'll be going on and on about my quilts a lot less... but right now, since I'm taking pictures of them and no longer blocking out the month of May from my mind because of the marathon sewing sessions... I'm kind of in a picture taking brand new shop honeymoon phase.  And it's a honey moon phase because quilts are so much easier to photograph than snoods... you see with snood Paul take three dozen pictures and then I look at them and say "Why didn't you tell me I looked so tired?!?!?!  None of these are going to work!!!" while he stares at me like the crazy person that I sound like (am?) when it comes to getting the perfect snood photo.

But since I've enjoyed sitting and staring at the quilts for way too much time, I thought I'd share a few of them under pretty: 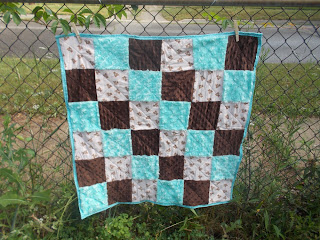 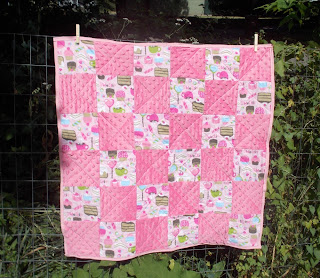 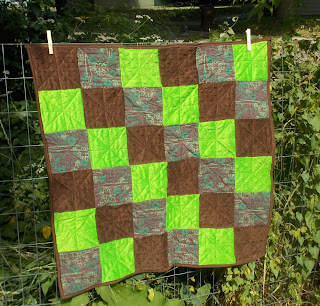 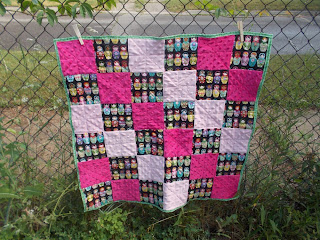 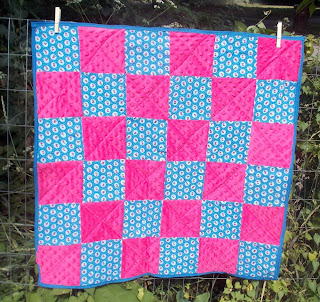 Yesterday Sadie had her last "Sugar Bug" slaying dentist appointment.  You see, two appointments ago  she'd been told that only one tooth needed "to be put to sleep" and that had been done.  So when we arrived at the last appointment thinking that this was basically a seal being done, and they announced this tooth was going to be put to sleep, someone was more than a little panicked.  She was so upset that she continued to cry through the laughing gas and that meant we had to come back again (don't worry, this is going to be "happy" in a few seconds).

After the last appointment Paul asked Sadie if she wanted him to take her and she said yes.  I asked her again on the morning of the appointment and she said yes again.  She put on her brother's batman shirt (which she amazingly fit into) to help her be brave and headed out the door.

A short while later (compared to the appointments with me) she was back with a big smile on her face.  "Did she cry?" I asked Paul.  "Nope" was the answer.

"Were you scared this time?" I finally asked as she bopped around the room happily.

So there you have it.  I wish we'd figured out that Daddy was the person to take her a few appointments ago! 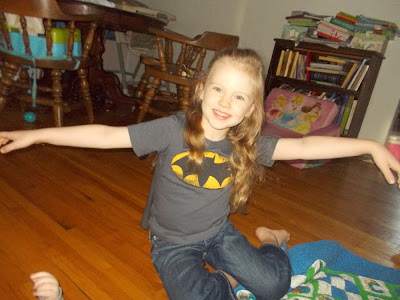 Our three super heroes piled into the playpen yesterday for some play time.

There you go Patrick.  See life isn't all princesses and sparkle glitter.

He's in a Wonder Pets shirt (2T... Oh my goodness kid, stop growing so fast!) in case you're wondering: 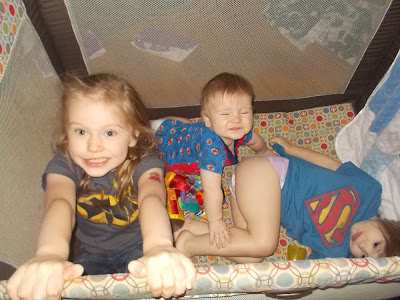 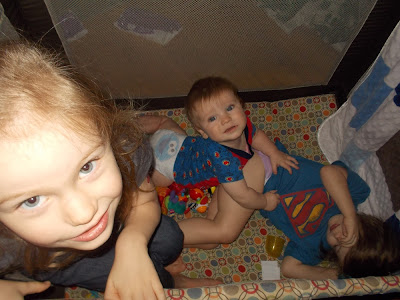 In real Patrick feeding news (aren't you all just dying to know this?  No... Anyways...) he took two bites of avocado earlier this week.  He didn't seem to hate it.

But then he decided that food still isn't worth his time and that if I put it on his plate he's going to throw it on the ground where it belongs.... so... yeah.

For those of you who did baby led weaning feeding, when did your little ones stop acting like you were trying to poison them each time you suggested they eat something?  I'm just wondering since this is so different from what we've done in the past...

I have to admit that I am slightly amazed that you can be this big while only drinking milk: 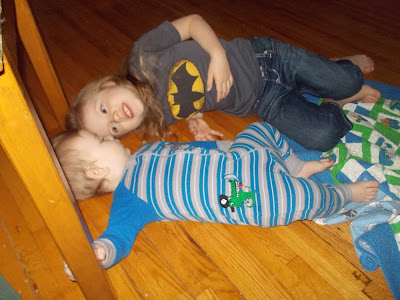