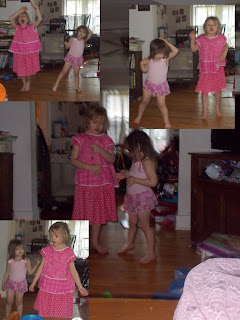 Last night we were praying a family rosary before bedtime.  It had been a long day.  The air conditioner was keeping it's corner of the living room pretty cool, but upstairs was in the nineties (where I'd spent the morning sewing and cleaning) and everybody was pretty tired.

Usually Sadie sits next to me and says her rosary.  But then Mae stood up and started "dancing."  And suddenly Sadie was right there with her, enthusiastically twirling across the living room.

My camera was next to me and I started to take a video with it... but I have yet to check to see how it turned out.  I think it's going to be pretty shaky because around the time I started filming Paul said:  "See, this is what happens when Catholics give birth to Pentecostals" and after a very long, long day I just couldn't stop laughing. 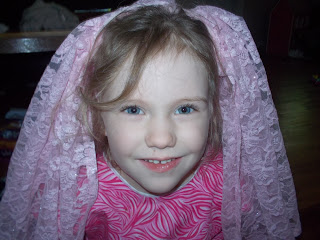 #1 might have been extra funny because I was standing next to Sadie in the back during Mass last week, after retreating there because Patrick was on the verge of falling asleep.  We were standing by ourselves outside the big glass doors, but we could still hear the cantors singing.  Suddenly I noticed that every time the cantor sang "Glory to God" Sadie would raise her little arms and sway from side to side.

Though it was a struggle, I managed not to laugh at the exuberantly passionate five year old standing next to me.  This kid.  Maybe that's why she was so fascinated when we were reading her little study Bible earlier in the week as it talked about David dancing before the Ark of the Covenant as they entered the city...

July has been a month of costly mistakes for us.  In addition to my still broken computer, I went downstairs yesterday to get some meet out of the deep freezer.  And when I pulled it open I stood there in shock.  The door had looked closed but it wasn't quite sealed... and the whole thing had defrosted.

Nearly a month of frozen dinners, a huge stockpile of meat (because when meats a good price I buy it and freeze it) and all the strawberries I'd bought when they were around a dollar a pound and then sliced and frozen for smoothies were all totally defrosted.  It looked like it had happened a while ago... and nothing was save-able.

I think at some point that would have caused me to cry... but I sighed and went upstairs and told Paul we had some major freezer cleaning to do and went on with the day and really tried to find the humor in another mini household disaster... 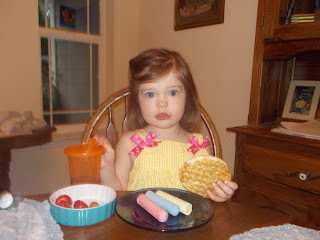 Which is why I shouldn't have been surprised when I heard the crash this morning coming from downstairs while working on this mornings' post... because clumsy parents produce clumsy children (at least in this house) and apparently not one but two of my bowls were broken this morning during the eating of breakfast.

One of these days (or years... it's not that high on the list of priorities... I've been using a mason jar as a glass for a while now) I'm going to have to go out and buy new glassware... the bowls are still numerous enough to be okay, but I'd say 80% of my glasses have been shattered in the past two years (or since a certain someone was mobile)... and the kids generally don't use the glassware themselves... but somehow they still have managed to break quite a few of the glasses.

Patrick slept in his crib until 4 am last night.  I'm very, very excited about this development.  You see, when he started getting his top teeth he stopped sleeping for more than two hours at a time for about a month (oh how I missed our champion sleeper) so I'm hoping this is a sign that his sleep patterns are getting back to normal:

Our first four weeks of homeschooling are over.  I'm sure that deserves its own post.  I wasn't planning on doing school through this summer, but someone begged and begged and begged and I finally said "sure why not" and now we're a month in.  Reading is really clicking and first thing in the morning she's begging to do reading practice on a little $1 whiteboard that I got in the dollar section of Joann's that is her very favorite school supply. 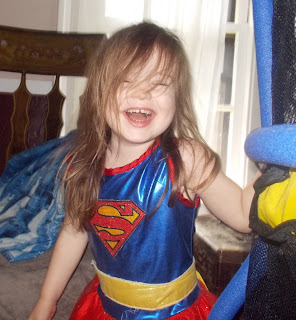 The most surprising part of doing school would be Maggie, our little always moving firecracker.  She comes over the second she realizes we're doing school and sits perfectly still and is completely silent and watches every single thing I write intently.  When Sadie sits down to write she grabs her crayon and starts to color.  I never would have guessed that Mae would be joining in the school fun (just because she's so wiggly) but she has been.  And now that we've read all the Little House on the Prairie books we've moved on to The Rose Years and when I begin to read Little House on Rocky Ridge she sprints over to claim the seat next to me moments after I open the book!


For more Quick Takes, visit Conversion Diary!
Posted by Cammie Diane at 8:58 AM