Sadie's in the other room singing a song she made up.  The chorus is "I lived in California many years ago.  I'm your favorite kid!"  The tune is actually surprisingly catchy.

I am amazed watching Maggie interact with Patrick versus interacting with Sadie.  With Sadie she has the temper of all tempers.  If she doesn't get her way with her sister she comes unglued.

On the other hand Patrick follows her around the house like a puppy and if Maggie has something he wants it.  And I'm amazed because she either a) let's him have whatever she's playing with happily or b) starts to cry and say "Me!  Me!  Me!" but she doesn't start swinging the way she most definitely would if her big sister did the exact same thing.

She's gentle with him in a way I seriously did not believe she was capable of... she very much acts like a very little kid the rest of the time but when she's interacting with Patrick she's all big sister.

Yesterday was Paul's birthday and Sadie had very specific ideas about his cake.  She announced the first week of August that we needed to make him a "Sparty Cake" (MSU's mascot) and so on Wednesday night we baked and yesterday morning we decorated while he slept (he worked the door again until 3 am).  When he woke up he came downstairs to our cake creation: 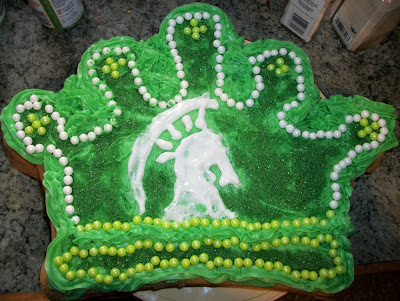 Although it's a little bit ruined for me because It's supposed to be a spartan helmet... but Paul pointed out that while it could look like a helmet it also looks a lot like Maximus, the horse from Rapunzel... Maybe he's just watched Rapunzel too many times with the girls...

Nani and Grumpa gave Paul a giftcard to Chili's for his birthday and so last night we all got ready and went out to dinner.  About ten minutes after sitting down Paul and I were both feeling a little stressed.  A half hour in I was thinking "I think we'll be doing take out from now on."  By the time we made it to the car we agreed that it's okay if we don't eat out for the next twenty years.  Because while Sadie was good and Maggie was fairly good (she let out a squeal when Sadie got her drink first, but other than that was good), Patrick was a monster.

He's reached the throw-the-thing-he's-holding-on-the-ground-then-look-down-and-scream-for-it phase and every thirty seconds or so the throwing fussing cycle would repeat itself.  While we managed to contain the craziness so it didn't effect anyone else (oh and we got there before 5, so the restaurant was just about empty) he pretty much drove both of us nuts... and we collapsed into the van exhausted: 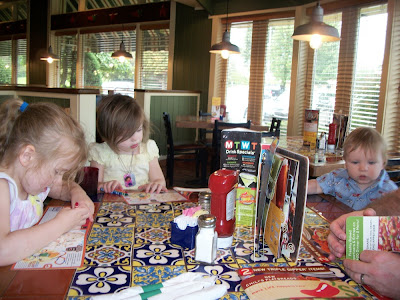 Today's field trip is a visit to a farm.  I have a feeling the kids are going to enjoy this a bit more than they enjoyed last week's visit to the MOMA...

I'd been trying to find a fiction book to read while nursing Patrick to sleep at night and I kept striking out at the library.  I was amazed at how many books that looked perfectly normal have morphed into wanna be Fifty-Shades-of-Not-Particularly-Well-Written-Historical-Fiction that looks like a perfectly normal book but turn disgusting fast.  I mean really.  I guess that's the trend of the moment?  I grabbed a book that was supposed to be about artifacts in the British Museum off one of the library shelves and while the story line was good I gave up halfway through because of the writer's need to hyper sexualize everything.  So I was pleased to stumbled upon The Tintern Treasure by Kate Sedley.  The writing is good and I literally don't want to put it down (it is a mystery).  I accidentally started midway through the series and I'm excited to go back and begin at the start of the series after I finish this one!

Maggie discovered the one thing that she could do that would get her rice and bean box banished from the house.  I would have swept rice and beans every day (and I was) without complaint but... when she decided raw rice and beans were her new favorite food it was time for the box to move outside (and become a rice and bean and sand box).  Well... cleaning at night time just got a whole lot easier.