Faith Formation for Little Ones (Part 2)

Sadie's curiosity about God and our faith began to blossom as she grew.  Around her third birthday I came across the Catholic Child's Treasure Box Books.  Now I know people who have children who have loved these books and people who's kids just weren't fans.  Sadie thought they were the most wonderful thing she'd ever read.  Each book has several sections, but the first seven books began with a story about Saint Therese.

It was as if Sadie had met a brand new best friend.  Suddenly our house was filled with talk of the Little Flower. 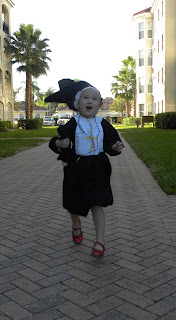 One of the first books explains that Therese was named Mary Therese (each of her sisters' first names were Mary and they went by their middle names) and suddenly "Mary Therese" was the subject of endless conversations.

And just like that the words "When I grow up I want to be a Carmelite" were ringing through the halls of our house.

We also continued reading the books I mentioned in my last post, but by and large if there was a book Sadie was bringing me to read it was likely a treasure box book.

At this point we also added in a family Bible story time where Paul would read from The Golden Children's Bible before we prayed the rosary (I need to find that Bible so we can start that up again because it was packed away in storage during the move and I haven't found it yet).

During this period I also made more of an effort to celebrate feast days... and the whole family was on board since that generally involved baked goods...  And that brings us to the present. 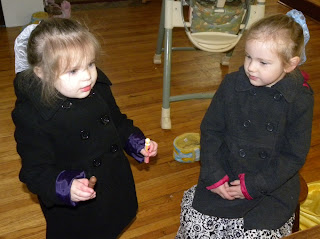 We've had a routine for a while now, and since we started "school" two months ago (per Sadie's desperate request, since, as she pointed out, she's now five) our little faith formation classes are Sadie's favorite part of the day.  She works hard to stretch them out for as long as she possibly can.

We read her new Bible.  I tell her at least four saint stories from this book.  We read one of the Treasure Box Books.  We work on memorizing a prayer that she hasn't yet learned (since we've prayed the rosary for so long she knows almost all the prayers I know, so right now she's working on the magnificat prayer... and "working on" means I read the words once and she repeats them and usually after about a week she knows the prayer by heart).  We're also going to start memory verses (the child thinks memorizing is fun... a trait she seems to have inherited from me... so I'm running with it..).

She's also developed a passion for books like this and this (the little $1.50 paper back books on saints and prayers and various aspects of the faith).  I cannot even begin to guess how many times we've read the one about Saint Bernadette at this point.   She's a big fan (and since they're $1.50 a piece they're a good deal if you have a little one who likes them).

She and I have also started praying morning and evening prayers together (and she's referring to them as the prayers that just she and I say together, which seems to be making them extra special).

Beyond that much of her education comes from the a nearly non-stop stream of questions.

At the moment that is what's working for us with our oldest.

Is there a book or program that you've used and loved?  If there is I'd love to hear about it in the comment section!
Posted by Cammie Diane at 1:56 PM