What I Wore Sunday: The Mass Where I Nearly Lost My Mind Edition

I almost lost it at Mass today.  It's true.  I had to leave.  I had to walk out the big doors and pray while rocking Patrick and shushing him and trying not to go back inside to announce "Mass is going on right now!  Could everyone please be quiet!"

Let me try to put into words what happened.  Mass got off to a rocking start.  I mean that literally.  When I saw the electric guitar come out to accompany the acoustic guitar I thought to myself "is it Sunday night?" and then gave myself a talking to about how we've been to a lot of Masses and there are much worse things than praise and worship music that makes me feel like I'm back in the evangelical Christian coffee house my friends and I used to go to in high school.  These priests are solid.  The liturgy itself will be flawless.  There will be no ad libbing.  Take a deep breath.  Chill.

I bounced Patrick up and down and mentally willed him to sleep.  And he looked me in the eyes, smiled and (in his little wordless baby way) said "absolutely not."  When he started to arch his back and throw himself backwards I knew it was time to step outside into the narthex.

And that's when I smelled the cookies.  There was a bake sale going on in the narthex (which in our parish pretty much doubles as the cry room).  Awesome, I thought, as my stomach reminded me that dinner was at 5:30 last night and that now, 16 hours later, I'd nursed a particular baby some 7 times but had somehow forgotten to feed myself in the bustle of getting everyone ready for Mass.  Whatever.  I could offer that up.  I stood in front of the glass doors, held Sadie's hand and jiggled Patrick while trying to convince him to take a nap.

Then I heard it.  The roar of voices.  I glanced over.  There were a half dozen 8-12 year olds in front of the bake sale table.  They were jumping.  They were talking in normal excited kid voices.  They were throwing cardboard boxes through the air and dodging them.

Are you kidding me right now?  I thought to myself.  During Mass?  In the narthex?  With at least a half dozen people out there trying to focus on Mass?

I stood in front of the doors and tried to hear the words over the din.  I glanced back and realized that the kids weren't alone.  There was actually a woman there with them, sitting there, watching them run wild.  I focused again on the Mass.  And then Patrick made a little tiny fussing sound and without even realizing what I was doing I let out the loudest "shhhhhhhhhhhhhhhhhhhh" that has ever passed my lips.  And the narthex fell silent.  A shocked silence.  An eyes boring into the back of my head silence.

For about two minutes.  And then the roar returned.

I moved over to another door and tried to mentally block out the sound so I could hear the priest speaking.  No such luck.  But then movement in the glass caught my eye.  Mrs. Adult Supervision (I was going to try to shorten that down to an acronym but realized that's not going to work...) had gotten up and followed me and was standing behind me watching me.

Because I'm the problem here, right?  Not the kids throwing boxes and running around during Mass (by the way, they weren't even there for the bake sale.  They were apparently there to hand out fliers).  Not the kids that were now even less supervised (there was a huge crash and I managed not to look over to see what had happened).

And that's why I went outside.  Before my head exploded from the noise and the banging and the eyes staring into the back of my skull and the not being able to hear the priest.

You're here for the Eucharist, I told myself as I paced and jiggled a fussy Patrick.  You don't need to hear the priest.  Just go back in there.  Stiff upper lip.

I did and saw the lady standing behind Paul staring about a foot to his right (not many people will glare directly at him for some reason...).

I went behind her, sat down in the stairwell and nursed Patrick hidden in his carrier until he was finally asleep (somehow nursing him, even in his carrier, in front of a large group of misbehaving preteen boys just didn't sound like a ton of fun).  Then we finally made it back to the pew for the remainder of Mass, which was a welcome relief, even with the electric guitar.

I don't know if I can say anything beyond, we survived but... we survived.

And as for what we wore for the WIWS linkup at FLAP?  Well... I tried to get a picture of our little group.  And here's what happened: 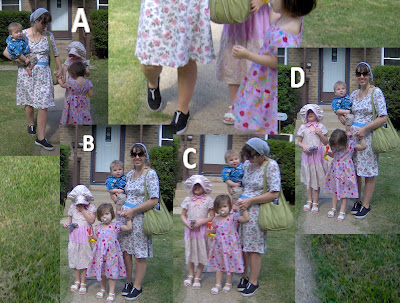 A) Maggie wants to hold my hand but not with her right hand since she's holding a toy rake and doesn't want to put it in her other hand.
B)  Sadie's about to cry because, as a result of the rake, I'm holding Mae's left hand and she "doesn't want to stand next to Maggie right now."
C)  I make a threat about the loss of beans in the bean jar if everyone doesn't smile right now.  By the way, threats don't usually create good pictures, now matter how much you wish they did.
D) Yup.  This is pretty much as good as it's going to get.

The girls are both in dresses made by Nani.  Patrick's in a thrifted outfit.  And I'll tell you what Sadie has on her head in a few paragraphs.

But first, my dress: 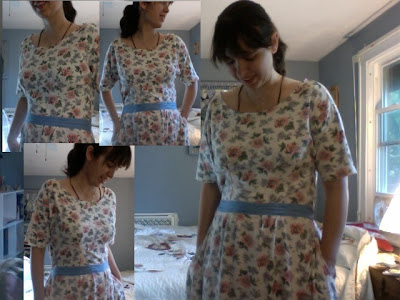 I was having trouble getting a full length picture with the lighting in my room this morning (if I went back any further the color was totally washed out on the computer).  I made this dress on Friday night after I finished my work sewing.  I took a dress that my mom wore back in the nineties and had passed on to me a while back.  I always loved the fabric.  I cut out the t-shirt style neckline and the elastic waist, put in darts, a waist band and a tie, hemmed it and changed the shape of the arms.  It's one of my new favorites I think.  Especially since it's also pretty comfortable!

Now on to the bonnet.  Last night I finished my work sewing for the night and went on the make the "Little House on the Prairie" bonnet I'd promised Sadie.  I watched a youtube video on bonnet making, drew up a pattern and sewed this: 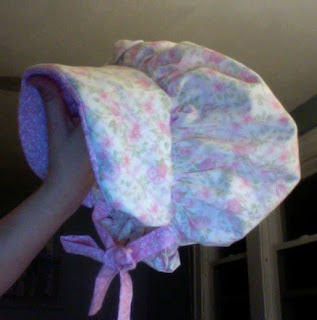 I gave it to her a six-something this morning.  And she was thrilled for about a minute.  I took these two pictures: 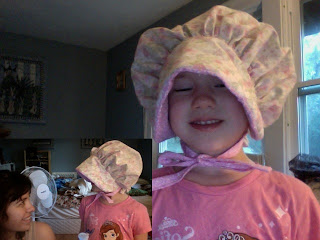 And then?  Tears.  She insisted she loved it.  She wanted to wear it.  Finally the cause of the tears were uncovered.  She didn't like the contrasting lining (which matches her dress).  Apparently contrasting lining shouldn't be part of a "prairie girl bonnet."  Sigh.

I assured her she did in fact look like a prairie girl and she enthusiastically wore it to Mass this morning (of course).

Now to make lunch.  It is finally time to eat.  Is it to much to hope for a quiet narthex if I have to retreat there next week when Patrick acts up?  I hope not... and yet...

Paul's comment when asked if he heard my "shhhhhhh" sound:  "Yes I did.  And I thought: Well.  She's finally snapped."