We crammed as much as we could into this last weekend before law school started back up.  And now, with Paul having just walked out the door for his first class at 8:30 this morning, we face year number three.  I know it's going to be over in a flash, just like the other years, but I'm still feeling a bit over dramatic this morning because here-we-go-again... and after five years of grad school (have I said that enough times?) maybe a teensy bit burnt out... and the three year old having a temper tantrum because she wants the light switch in the living room off, and is willing to do the time in the time out chair to have it that way for approximately five seconds before I turn it back on, is not helping.

But... at least it was a marvelous weekend.  And before I finished this post some quiet time like a big girl in our room had turned around the tantrums (and the day for everyone else).  We did a field trip to a historic site in a nearby town and had a picnic and walked around and looked at all the old buildings (and the fish).

We more or less had the place to ourselves: 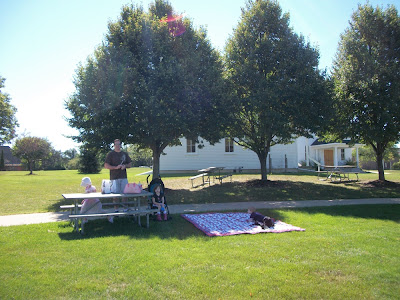 Patrick was a fan of the big red barn.  And of getting his picture taken. 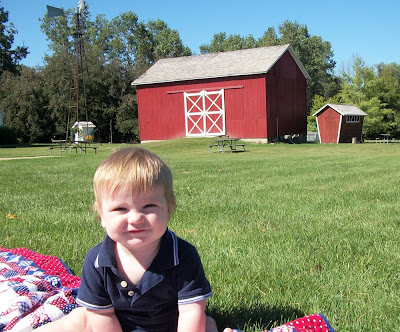 Sadie came sprinting back from the gazebo.  Something was in there. 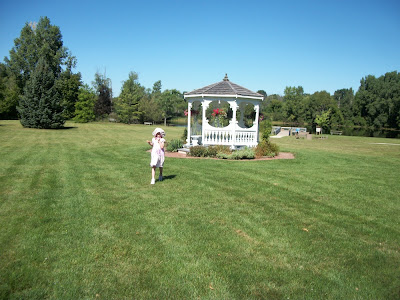 She was brave enough to go back with me to face him though: 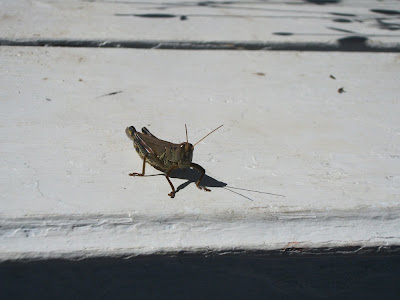 Although we didn't stay long in the gazebo... what with the cricket staring at us like that: She posed in front of the old school house (with beautiful apple trees next to it that you can only barely see): 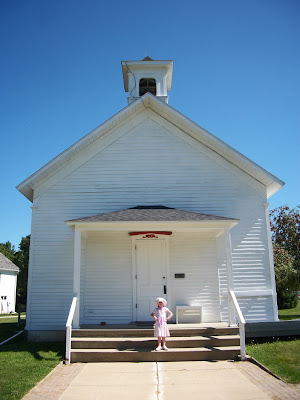 And we marveled at the plaques that told how the buildings were moved to their current location.
What an amazing project that must have been: 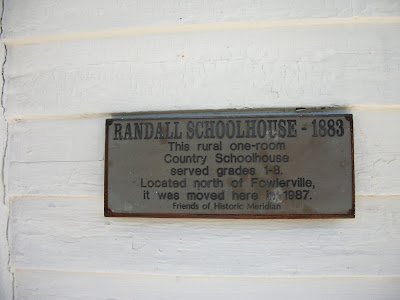 The church is next to the school house: 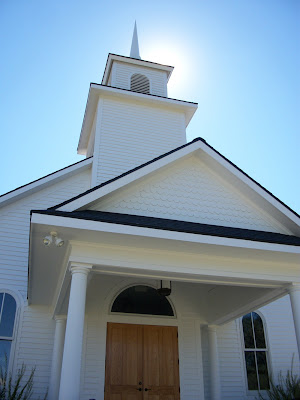 We walked over to check out the farm house: 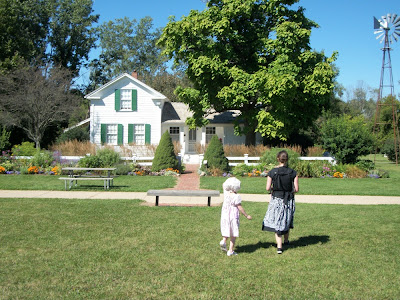 It has quite the view: 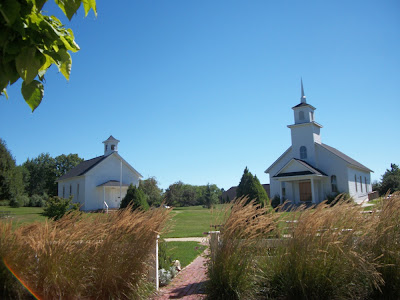 There was a conversation about out houses: 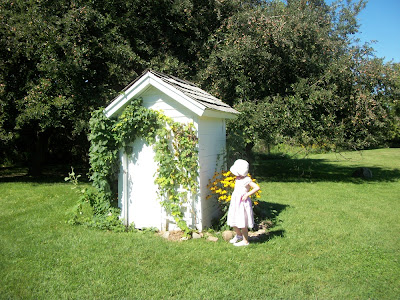 Then we walked over to the lake and saw a pretty big fish swim by (and hundreds of little fish too!): 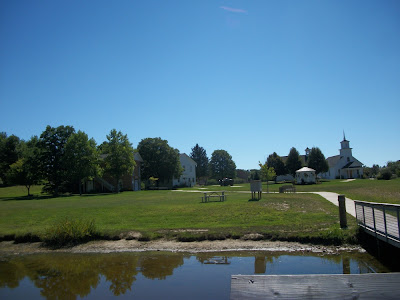 The one we spotted looked like a carp (and the little ones had pretty blue fins): 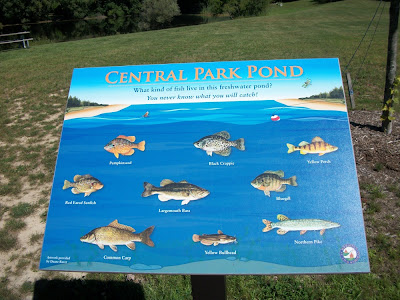 There was a sign on this building that said that it was found to be about 440,000 lbs when they moved it here. 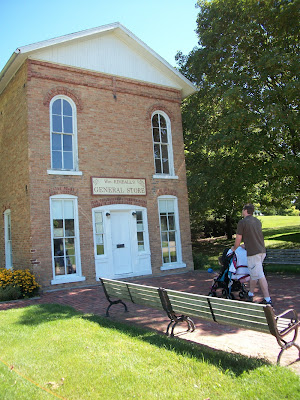 We checked out the last few buildings: 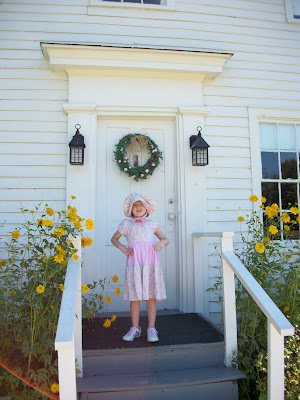 Admired the garden with flowers popular in the 1850s. 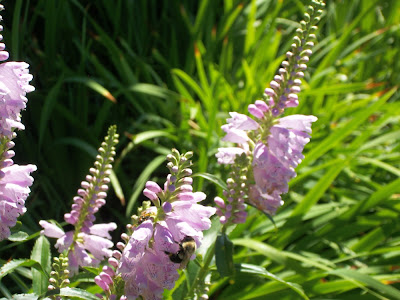 And for the grand finale saw the log cabin: 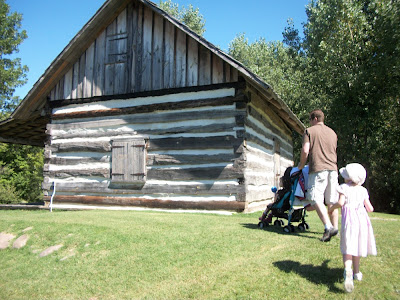 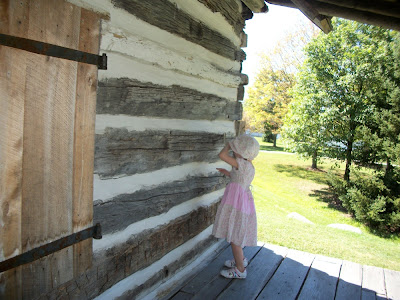 Saturday was kind of a lost day.  I had a migraine and Paul was amazing and watched the kids during the time he was supposed to be in the library while I took benadryl (it worked) and slept off the horrible-ness (it was the kind with an aura where my face goes half numb and I start slurring and even though I've had plenty of them over the years they're always kind of terrifying).  Thankfully the anti-histamine almost always work on them.

We made up for it by going to two parks on Sunday after the kids and I walked to Mass (Paul got to go to the teen Mass in the evening).

One of her favorite things lately is to say that she's "day dreaming." I'm guessing that's what's happening in this picture: 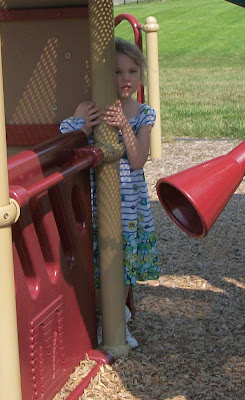 Maggie was her regular acrobatic self (complete with red super hero boots).

I can hardly believe how big she's getting!  She's now wearing size 6x dresses.  She's tall like her sister! 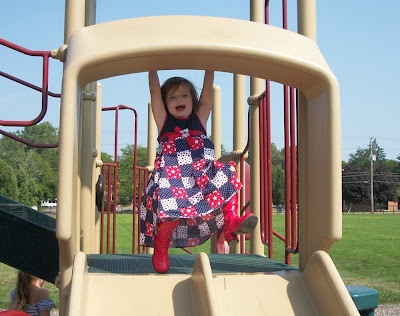 If I had to guess I'd say that she's pointing out her little sister's naughtiness: 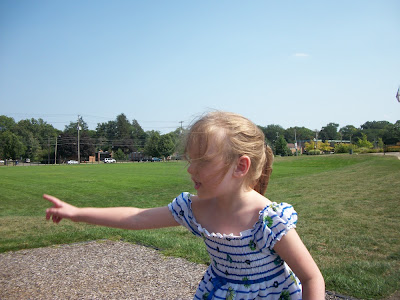 Patrick, sporting his new haircut, watched the fun while sitting with Mommy: 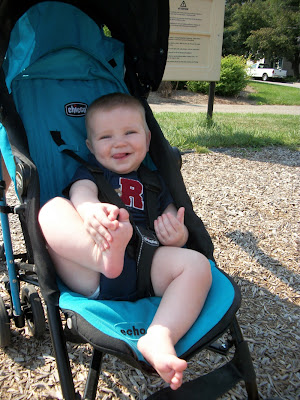 Daddy and Sadie had a conversation about fairies through these little "phones." 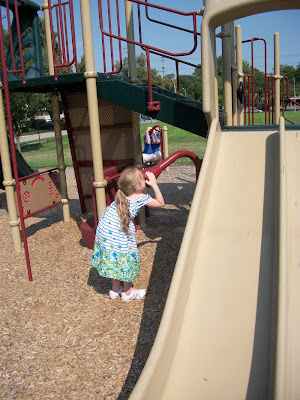 Sadie's still not thrilled with the new nickname and is insisting on calling him Bippy. 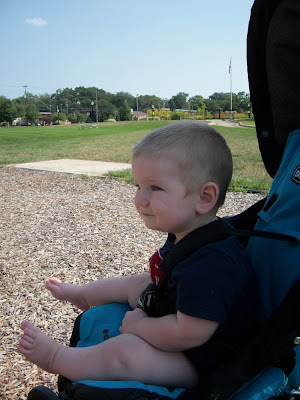 Super hero Maggie to the rescue! 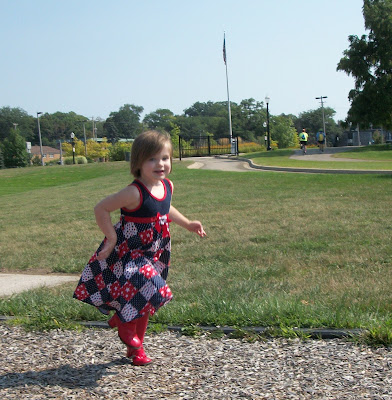 And it was finally time to go home so Daddy could head to Mass: 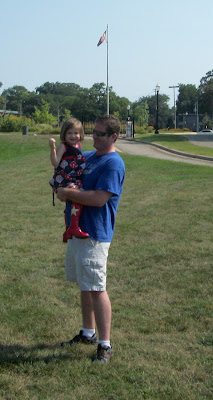 And here's what I'm currently lugging around with me in the car.

Knitting was a little depressing when we lived someplace where it was above 80 most of the year! 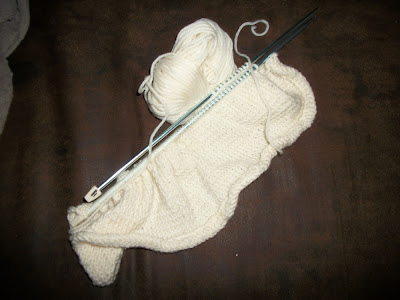 And that was our last weekend of the summer break.  For more Week Ending head over to Re-inventing Mother!