This was a wonderfully fun weekend.  We started with a field trip to the museum at Daddy's school on Friday, followed by swim lessons on Saturday and a long walk and running around Daddy's school on Sunday.  Between three cameras (none of which are mine) I managed to get pictures of the fun.

Here Sadie is in front of an African Elephant.  All three kids loved the space across the room where they could actually touch the tusks on another elephant skull. 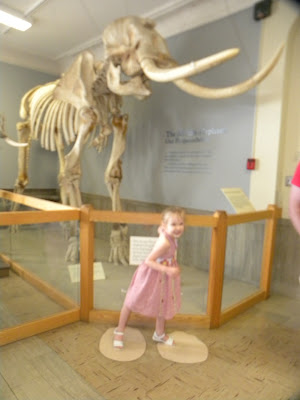 There were animals and dinosaurs (and a dinosaur bone they could touch): 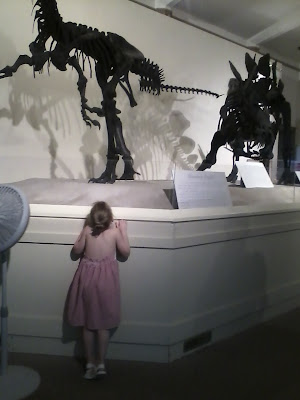 Sadie looked at the cheetah.  Patrick lunged at it and tried to grab its nose through the glass.

I think cats everywhere have reason to be a little nervous around him. 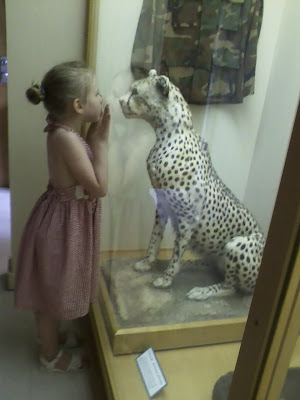 Sadie handed her dress over before going down the soaking wet slide before swim lessons (we learned out lesson last week when she got to the bottom dripping from all the water on it): 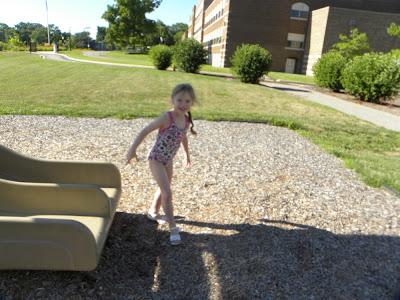 And she grabbed my camera and snapped a few pictures: 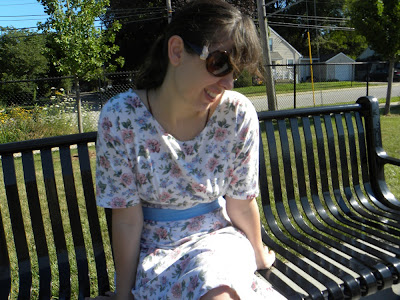 I just love the picture on the left of Patrick.  We were waiting at swim lessons when I snapped it.  His eyes just looked so big!

And of course, I had to throw in a picture of his little smile: 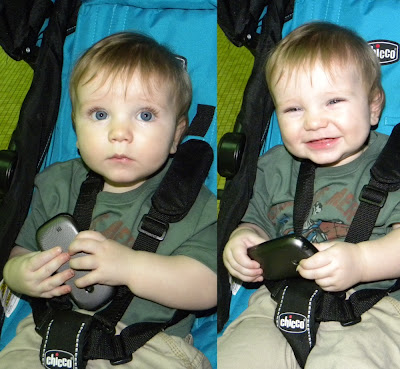 We stopped by the Sparty statue on campus: 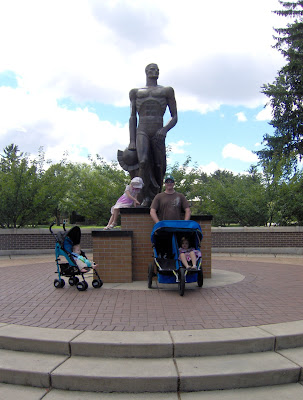 And then found a field that didn't have signs saying it had recently been sprayed (that took a while):

Then it was time to run around. 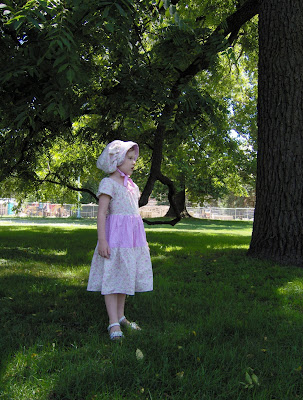 Patrick loved playing in the grass (and managed to do his funny little sliding crawl over it without getting a single grass stain): 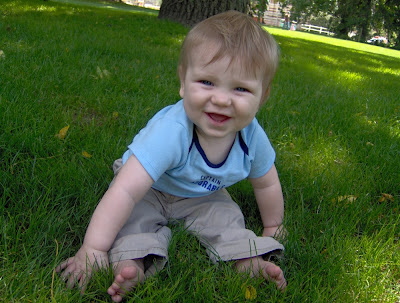 He's a big fan of pictures: 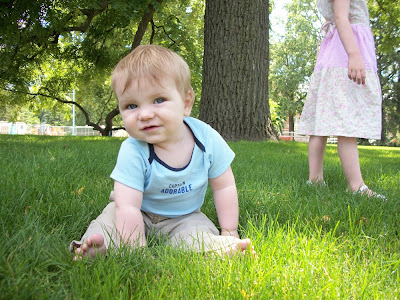 And watching his sisters run around: 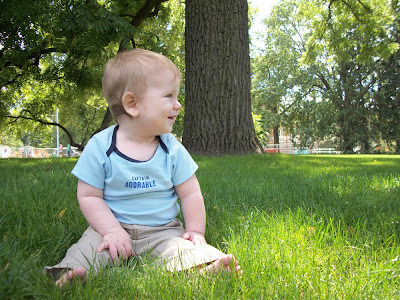 It was pretty clear that he wanted to chase after them though: 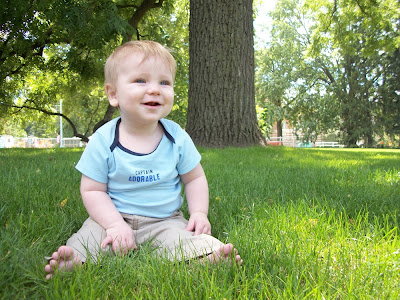 Sadie joined him for a quick visit: 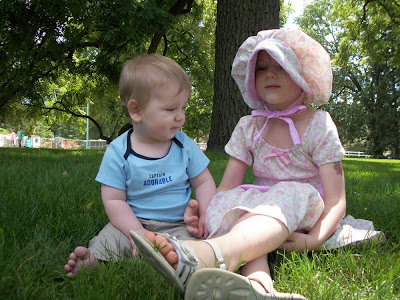 Daddy took the first shift making sure Mae didn't run into the street on the far side of the field (of course she repeatedly headed straight for it): 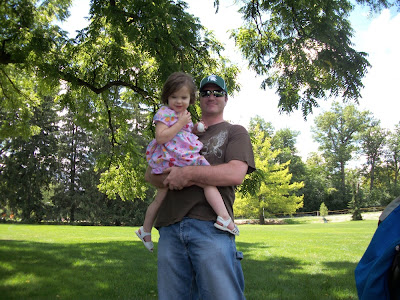 And for a while Patrick and I lounged under the tree: 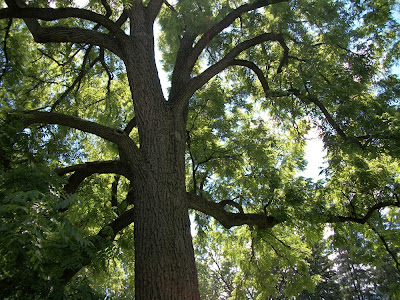 Patrick actually tried to head out after he after a while: 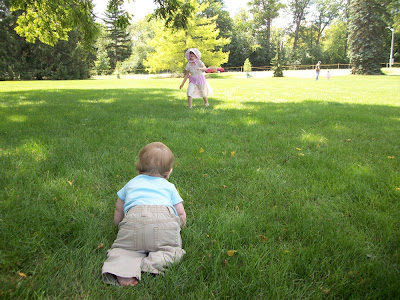 And then the Mommy became the baby chasing monster and took a turn keeping Maggie out of the street.  She loved it (that might be my favorite picture ever): She also decided that Patrick was "base."  I'm not sure why she has a concept of base since we've never played tag, but she does.  Or she thought he'd save her from being tickled.  Or something.  Here she is running over to him: 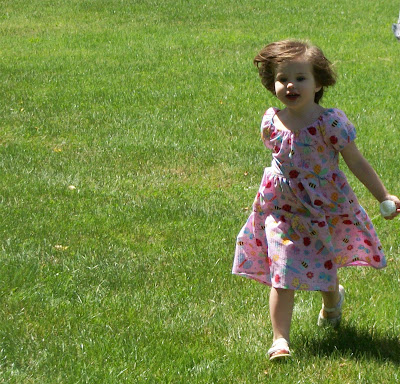 And here she is when she reached him: 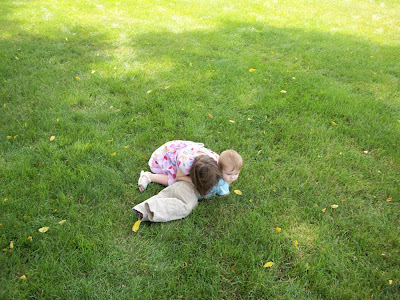 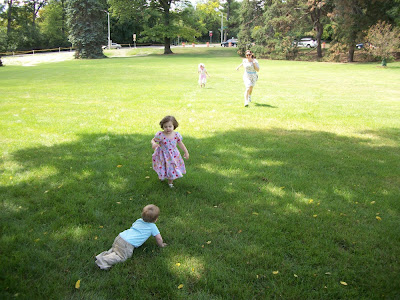 All the attention was a little much for the littlest baby: 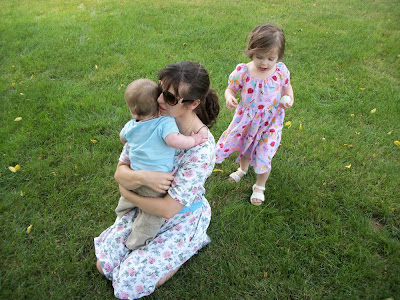 But it was fun! 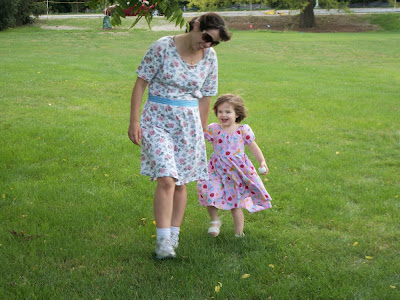 And then it was time to head for home because Daddy suddenly got a call asking him to come in for an interview and came home this evening with a job!  It'll only be a couple nights a week, but I'm pretty excited!  Every little bit helps!

For more Week Ending head over to Reinventing Mother!
Posted by Cammie Diane at 7:00 AM