A Weekend of Mae 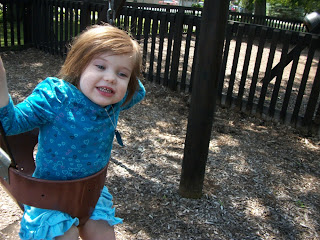 A particular three year old has been in fine form this weekend, beginning with Friday night when I heard Maggie up and about in her room around 11 o'clock.  I went in to see what was going on and found that one of the two little Dora necklaces that she'd insisted on wearing had fallen off and she was frantic.  My arrival, however, seemed to convince her of one thing.  I was obviously involved in the disappearance of one of her little Dora dogtags and likely had the necklace.  In fact, she was quite certain that I was wearing it.  Or maybe it was in my pockets as she tried to to find them to search them (if only I'd had pockets...).

I imagine she was suspicious because I'd tried to convince her to take them off at bedtime, but had dropped the issue when it became clear that the removal of the necklace was going to lead to sobbing and hey, I pick my battles.    Now she'd lost them and she was certain that I was involved, having obviously done something devious like snuck in and removed it from her little neck while she was playing with her stuffed animals.

After finally getting her to bed I settled down to knit, because knitting is a wonderful cure for illogical toddler craziness around here (although to be honest, once she calmed down it was hard not to laugh), especially when it involves soft and luxurious dk weight wool that I bought for my birthday sometime after Sadie was born and am finally getting around to using after saving it for "something special" for a solid four years. 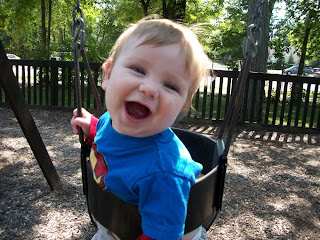 Mae has had a tough weekend all around though.  On our first trip to the park she had a major mishap.  I'd picked her up out of the swing and put her on the ground next to me, then hurriedly lifted up Patrick so I could reach down and grab her hand before she made a break for it.  After all, she's a runner and the magical age of three didn't change that fact.  Paul was on the other side of the huge maze like playground but I thought I could handle Mae in the small, mostly enclosed space.  I was wrong.

Unfortunately grabbing Patrick took a second too long and she ran to the back fence in the play structure.  Not a big deal I thought.  I mean, she couldn't go far.  Then she ran along the back fence and paused by the big kid swings.

Now I know that parents who've never had "a runner" might find it hard to imagine a child who runs off and doesn't immediately stop and come when called.  I was chasing her, holding Patrick when she turned and grinned and took a step towards the big kid swings, which had two little girls being pushed by their moms soaring through the air on them.  "No!"  I shouted.  She looked at me with a smile.  "No!  Stay there.  Don't go into the swings.  Mae!  No!"

These days she listens most of the time when I tell her to stop.  But I saw the mischievous gleam and just knew things were about to take a turn in a bad direction.  I could only hope that the moms, who'd stood, pushing, watching me yell for her would stop the swings before she reached them, because they were between us, blocking me, and I couldn't get to her before she got to them.  I've stopped plenty of swings when little ones have darted in front of us. And that was without a clearly distressed mom yelling at a child to stop or she'd get hit.

Alas, not everyone has common sense.  The mom kept on pushing as Maggie ran by and got hit full force in the back by the swing.  She flew through the air and hit the ground hard.  I'll admit I expected a hospital visit as I finally reached her (the flying swings no longer blocking my way).  And then she jumped up, brushed herself off as I apologized and checked to make sure the little girl was okay (she was) and then Mae was ready to play again. 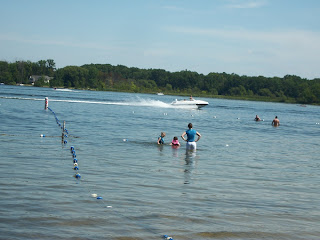 That child.  When Paul got there he scooped her up and later as she played in the sandbox (which totally held her attention) we both hoped that the incident might make her more cautious around swings.  And yet... I'm not entirely hopeful on that front because she didn't seem particularly upset and not a tear was shed.

Yesterday we went to the lake and she spent the entire time examining various balls of plant life and slime.  She followed every rule lest she lose her lake privileges and be taken away from her slime squishing activities (the consequence for not listening is getting in the car and going home).

All of this makes her treatment of Patrick even more amazing to me.  He spent the morning stealing toys from her.  And she dots on him and lets him get away with pretty much anything and plays the part of responsible big sister when they're playing together.

Now to get ready for another weekend trip to the park!  Hopefully everyone will be on their best behavior today!  Especially the little one in the pink life jacket!
Posted by Cammie Diane at 11:53 AM