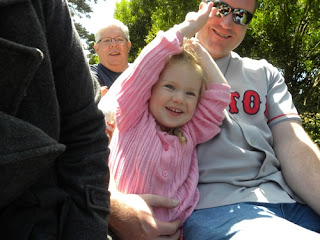 Were you surprised by the page this morning?

After nearly three years I changed the template for the first time ever.

I liked the old template, but I was unable to add "share" buttons at the bottom and that was really aggravating.  I would go to the edit section in layout and it would show that they were "there" at the bottom of each post, but they wouldn't actually come up.  I change the template and voila, they appear.

I nearly went for the pink template, which I do really like, but thought it might be a little too pink.  I tried out the purple too, for Lent, but it just looked kind of blah, and some of the side bar items weren't showing up with the grey font color.

Besides I'm a sucker for dandelions.  Ask my parents.  They likely remember me going out and trying to convince my dad not to eliminate the hundreds that would grow in our driveway with a weed whacker.

I'd been thinking about doing this for a while, but apparently it takes me six to eight months to make a decision about changing the layout of my blog.

And on a totally random, unrelated note, is Gmail not working for anyone else?  Mine shows up, shows I have emails, but won't let me click on ANYTHING.  It's been doing it since last night and is rather frustrating.  I was wondering if it was just me, or if it's gmail in general at the moment.
Posted by Cammie Diane at 7:09 AM