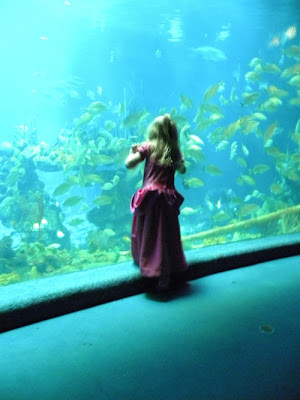 An exciting part of Nani and Grumpa's visit came when we went to visit Epcot with them.  Now I should start by saying that as an adult who was a total math and science nerd as a kid, Epcot is my absolute favorite of the Disney World Parks.  And Paul loves it too because it has a section devoted to different countries of the world (like mini towns in a big circle around a lake).  So I lobby to go there as often as possible when we're in Orlando (I have not yet convinced Sadie that Epcot is more fun than the Magic Kingdom).

We got to Epcot shortly after it opened during this visit, but it was already surprisingly busy.  I had planned where we were going before we got there (obsessive vacation planner that I am) and we headed over to the Nemo themed ride, which Sadie and Mae both love.  After the ride we went up and saw the manatees (Sadie afterwards got a toy whale in a Burger King kids meal and named it "manatee") and then went over to see the huge tanks fish.

Sadie was fascinated.  We watched a sea turtle swim by.  She walked slowly around the edge stopping to stare.  And I vaguely noticed as I snapped pictures that a few park workers had stopped and were watching her as she quietly watched the fish.

Then they asked us if we would like to have "Magical Moment."  We said "yes, please!" and were taken up, above tank, where the divers were entering the water to feed the fish and were given a tour.  The tank was so huge that we never managed to spot the four dolphins (imagine how big that is!), but we did get to see the turtle eat out of his "salad bar" (a PVC pipe with heads of lettuce sticking out of it).  It was very exciting!

And that was our Magical Moment!  I definitely was a high point of the trip!
Posted by Cammie Diane at 7:49 AM