On the USPS and Their Near Constant Inability to Deliver Our Mail...

I have to say, the US Postal Service has spent the last six months seriously annoying me.  We never had a problem with them before the move to Florida, but since we've moved... they seem intent on driving me nuts.  First it was "little" things.  A relative would send the girls a package and they would get a delivery confirmation that it had arrived.  And finally over a week later, we would get a note saying that it was being held at a package facility miles away that's open from 10-2 (or something like that... maybe it's 3... either way, very limited hours).  So we'd end up waiting another three days for Friday, when Paul gets out of class early, so that I wouldn't waste a gallon of gas in our van, driving across town by myself and loading and unloading the girls and taking them with me while balancing a giant box.  Then we'd arrive and be given a box that easily could have fit in our box, or at least in one of the boxes that they can give you a key for.

Then there was the Christmas incident where two boxes came for the girls, and they only gave us one (and only wrote 1 on the tag)... we realized what must have happened and when the PO was finally open again after Christmas Paul went and asked for our other package and was asked by a shocked postal worker how he knew it was there.

Family members have tried using FedEx, only to find that they "have a relationship" with the USPS, and turn all our packages over to the Post Office for delivery.  Which means they take just as long to make their way to our box.

Maybe the root of my annoyance is that it used to cost $1.20 to send a rosary and now it costs around $1.90.  Since my store hasn't been open for 2 years yet, that quite a jump.

But none of those things would inspire their own post.  The night before we left to to see my parents, our W2 finally arrived (that would make it the 20-something-th of February).  We'd been waiting.  We'd called to get another.  We'd phoned Paul's former employers tax people (or at least their representative in India) and followed the instructions that should have given us the documents online and had their site not work.  We called back to find out that the company was closed for the day.

I was especially annoyed because we had updated our address with CVS after we'd moved, so this shouldn't have happened (okay that's not the USPS's fault).  But what happened next is.  Here is a picture of what came in the mail: 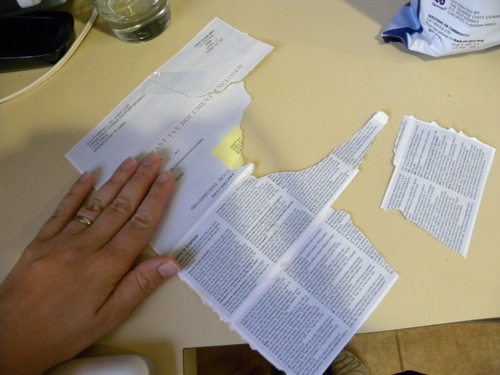 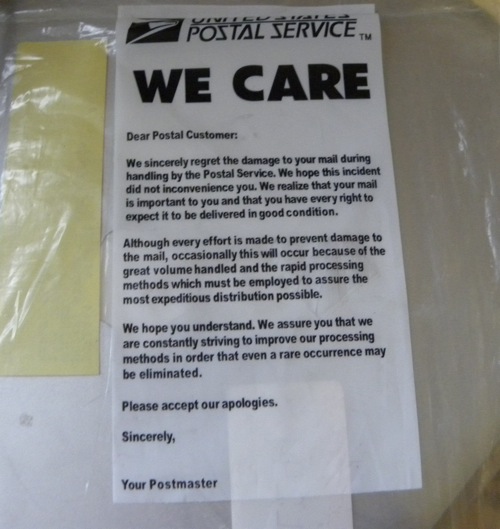 I managed to get all the numbers I needed from various parts of the form, but just barely (oh look, you can see the 12 box down here!).

Sigh.  I'll just keep telling reminding myself that they're likely very shorthanded and overworked and that's why dealing with them seems to be so incredibly difficult.  I do wonder why service is so different in different parts of the country though.  That's definitely been the most surprising part of all of this.  I do miss my Northern California hassle free mail delivery!
Posted by Cammie Diane at 8:10 AM