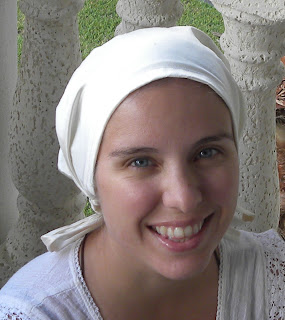 I spent Mass today trying really, really, really hard not to be distracted and failing horribly.  Let's just say that thoughts like: "If my six year old daughter ever slaps me during Mass and then looks at me like a little snot, I'm not going to be trying to appease her and smile at her nervously, I'm going to be dragging her butt outside so we can have a little heart to heart" were flitting through my head, and that the drama unfolding directly in front of me was awfully hard to ignore (especially since it was directly between me and alter).

This was followed by brief moments of panic where I hoped with all my might that I wasn't two and a half mere years away from pre-teen attitude.  I really hope not.

I have also learned something these past months.  There is no child behavior at Mass that bothers me in the slightest, as long as the parent(s) make some effort to correct the child.  It's the running wild without while Mom looks away and pretends not to see that drives me a little crazy.  My kids definitely have their moments (and entire days).  But I can't imagine kneeling and ignoring them while they lay on the ground kicking the wall during Mass (I barely managed to not blog about that one originally through a major Lenten act of self control).

Today, Paul took the 8am Mass, since Sadie had had a headache and tummy ache the night before and we'd decided to let her sleep (and she's usually our early riser, so I think she might have had the remnants of whatever has been being passed around to the last month) and I went to a Mass later in the day and was reminded of why exactly I should be up and running around at 6 on every Sunday, because at the 8am Mass I'm much, much, much less distracted.

The next almost suppressed thought came as I attempted not to blog rant in my head (and failed) and went something like this:

"A public service announcement to church readers:  Inflection while reading is fine.  No one expects you to be monotone.  But please, please, please do not turn the reading into some sort of theatre performance in which the "audience" begins to wonder if you're about to pull out hand puppets and start acting out the reading on "stage."  It really doesn't "add" to the reading and is actually incredibly distracting."

But by that point I was really losing the battle against my exasperation (it wasn't for lack of trying), so I probably was just missing the unintentional (but very obvious) humor of the situation.

On the upside after two NO Masses in the last two weeks (we've been using the divide and conquer method for a while now, since every week someone in our family has been sick) I'm beginning to learn the responses.  I think I only said: "And also with you!" twice.  And I probably would have done better if I'd actually had an insert!

And that is my I-survived-this-Sunday post!
Posted by Cammie Diane at 5:08 PM