As a Florida resident was fortunate enough to experience Disney World with visiting family over Paul’s break, and who over the past year has been lucky enough to spend a bit of time in the Magic Kingdom thanks to the great in-state deals that are offered (right now it’s $99 for three days), I’ve developed my own Magic Kingdom strategy.

Going to the Magic Kingdom with a one year old and a three year old has disaster potential written all over it.  Impatient little ones aren’t thrilled to wait in long lines, and the heat of Florida can make tempers short and little ones exhausted, quickly.  Before our first trip, I read everything I could about traveling with toddlers to Disney World, but after several days in the park I’d come up with strategies of my own.  On this trip I perfected my strategy, and by the final day we were all surprised by how smoothly we were able to make our way around the park.

This post is exactly the type of thing I wanted to read before my first trip to the Magic Kingdom.  It offers what I’ve learned through trial and error, during our time enjoying the Magic Kingdom.  It’s aimed at helping those with babies, toddlers and preschoolers, since my plans would be quite different if I had older kids.  And so, without further ado, here is my Magic Kingdom Strategy:

Paul just pointed out that parts of this post won’t be totally relevant after the new Fantasy Land opens late this year and that this post has a shelf life of two months.  I may have to point out in response that that just means we’ll need to go back in a few months for the sake of blog research.  If only I could get Disney to sponsor the trip! 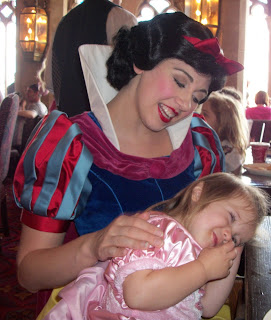 1) Before Arriving: Go on the Disney World Website and locate the Baby Care Center on the map.  We didn’t actually use it on this entire trip, but it’s good to know that it exists and how to get to it!  I thought about making a list of things to bring, but I imagine you’re all perfectly capable of packing a diaper bag, with everything you need to get through the day.  And if you do forget something there’s a good chance that the Baby Center has it… Also, make sure that you wear the most comfortable pair of shoes that you own.  That’s the mistake I seem to make the most frequently.  Because even with trams and monorails and ferries, a trip to Disney World often involves a lot of walking.

2) Arrive at the Park Early:  If the park opens at 9am (which seems to be the standard opening time, although on one of our days it opened at 6am) try to time your arrival so your pulling into the parking lot at 8:30.  If it’s possible to already have purchased your tickets, so you don’t have to stand in line, then do so.  If you’re going to take the tram, make sure you have a stroller that can fold up to fit in the seat with you.  When the trams were busy and we weren’t parked too far away we would just walk up to the front. 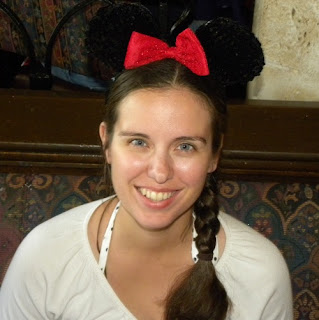 Arriving half an hour early might seem like a long stretch of time, but as we all know, traveling with little ones takes quite a bit of extra time.  There’s parking the car and then unloading the strollers and the diaper bags and the babies.  By the time you make it to the ticket area, and then unto the monorail (and I’m suggesting the monorail to begin your day, since it’s the quickest route to the Magic Kingdom).  After getting off the monorail stay to the left (people tend to go to the right) to go through security and the entrance gates as quickly as possible.

2)  Inside the Park:  Now that you’re inside the park make a  bee line to Fantasy Land.  Fantasy Land is in the back of the park, behind Cinderella’s Castle.  You’ll walk straight down Main Street and you’ll pass through the Castle, and come out in Fantasy Land.  Since most people get distracted on the way, Fantasy Land will likely not be crowded yet.  This is great for parents of really little ones, because Fantasy Land has the largest number of rides that are perfect for tots.  While you may come up with your own strategy from here on out, I have come up with a Fantasy Land Strategy, that is based on which rides seem to be the most busy, and which have the longest lines fairly early in the morning. 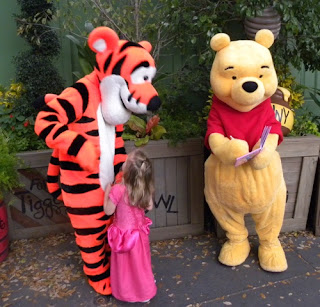 Begin by staying to the left upon entering Fantasy Land, while going past the Carousel.  Walk past the PhilharMagic to the Peter Pan Fast Pass kiosks, and get Fast Passes for everyone in your group.  Then turn around and take a spin on the Carousel (if Dumbo is open, go there first, and then go to the Carousel.  At the moment, Dumbo is closed however, which is why it’s not included in this list).  The exit to the Carousel will put you right next to Snow White’s Scary Ride (which from what I’ve read isn’t as scary as it used to be) (ride #2).

After Snow White’s Scary Ride head over to Small World (across from Peter Pan).  A Small World is a big favorite in our family, and the tiny line it often has in the morning means we sometimes ride it twice.  Hopefully by now the FastPass you have for Peter Pan is ready to be used.  If it is, head over and grab a few more Fast Passes for Winnie the Pooh (these are nearby, over by the PhilharMagic, not across Fantasy Land by Winnie the Pooh).  Then go back and enjoy not standing in line for an hour to ride Peter Pan (for some reason it always has one of the longest lines).  After exiting Peter Pan you may want to take advantage of the location of the rest room located on the opposite side of the ride (across from Small World, next to Peter Pan).  If diapers need to be changed, and you don’t want to trek across the park to the Baby Center (which I don’t!) this is the place to do it. 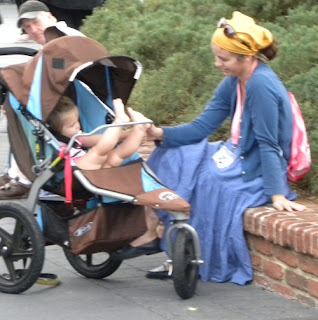 There’s a good chance that your Winnie the Pooh pass won’t be ready to be used yet, so this would be a good time to take another spin on the Carousel (because the line on the Carousel is usually pretty quick).  It would also be a great time to see the movie in the PhilharMagic (nursing mom’s bring your cover if you use one!  Little ones will be quiet and happy, and you’ll have a nice, quiet place to nurse and enjoy the show).  I was actually skeptical about how good the short 3D movie would be, but it’s one of my favorite places to visit in Fantasy Land and it’s invaluable as a cool break.

After the Philharmagic you’ll head over towards Winnie the Pooh.  I’d advise going just past Winnie the Pooh and taking a spin on the Teacups first.  If you don’t want to spin too much, watch the ride as you wait in line.  During our trip in December, and our trip this time, there was one pink and yellow Teacup that spun much, much slower than the others (even if you tried to spin it).  If you’re not a fan of being dizzy, try to get to that Teacup first!  After the Tea Cups head to Winnie the Pooh.  Let you’re kids enjoy the play area as you stand in line (if they’re old enough), from pumping water on gopher to smearing “honey” (electronic) on the wall (Mae’s favorite Pooh Game). 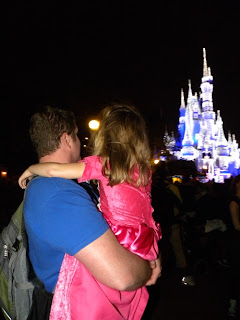 Then congratulate yourself on riding every ride in Fantasy Land before lunch time!

3) Lunch:  It’ll likely be lunch time by now.  If you’re planning on eating park food at the park, the Pinnochio Themed Restaurant behind the carousel is a family favorite.  Our girls usually share a pizza.  If you’re planning on heading out of Fantasy Land I’d also recommend the Colombia Harbour House Restaurant in Liberty Square.  It has a lobster roll for around $9 (Paul said it was “decent,” especially for the price) and I had Clam Chowder for $4-something (the Chowder was good!).  The prices were not terrible for in-park fare, and the food and atmosphere is enjoyable.  If you're trying to save I suggest not making reservations on line, because the restaurants that take reservations tend to be the ones that cost quite a bit more.

After lunch you can head out to…

4) Explore:  Now that you’ve enjoyed toddler friendly Fantasy Land, you’ll get to decide between the other park sections.  None of them have quite as much toddler-friendly variety as Fantasy Land, but each has it’s own high points.  I’d suggest stopping by the Bear Jamboree in Frontier Land, on your way to the Magic Carpets in Adventure Land.  Or you could head over to Tomorrow Land to ride the People Mover.  Or you may just head back to your home (or motel!) to relax!  A fun half day with toddlers at Disney World is a victory!

And that is my Disney World Strategy!

We used this strategy during Christmas and February break, two fairly busy times, and it worked really well for us.  I hope it helps you as you plan your trip!
Posted by Cammie Diane at 7:46 AM