Yesterday's Excitement: The Truck, The Tree and The Power Line

Sometimes it feels like our little residential street has a disproportionate amount of stuff going on.  Take yesterday for example:

I was coming out of the kitchen, when I heard the sound of a huge truck going down our little residential street and went to the window to see this: 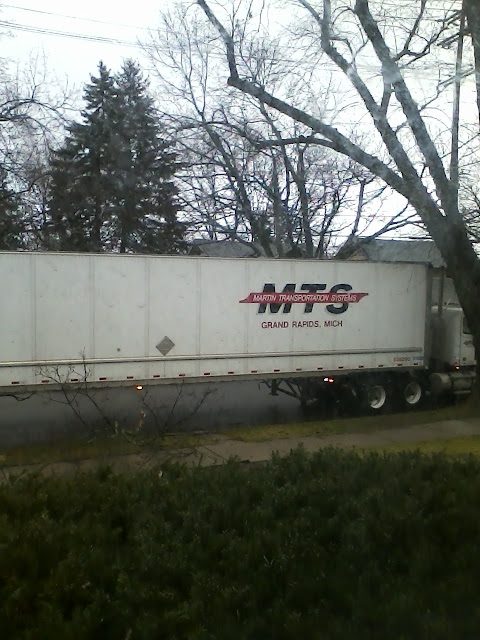 The huge branch on the ground had just been hit off our tree and another branch was sticking out of the side of the truck up by the cab.  As I stood and tried to figure out what the driver was doing he threw the truck into reverse and started to back up... into the tree: 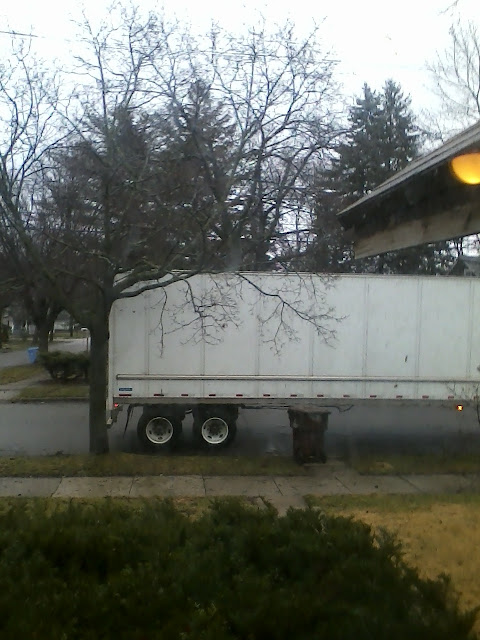 It's hard to see in the second picture because I have the worst possible angle from our window, but after hitting the tree he decides to back up and hits it a second time and continues to back up into it.  Somehow, it did not fall down.

Then he started honking.  I got the impression he was waiting for someone to come outside in the house next door.  No one ever did.

Sadie was staring out the window wide-eyed, and started saying "hail, Mary's" as the truck continued to hit the tree (somehow it didn't fall over) which is what she does whenever she's worried about something (she did it during our fun drive through South Chicago).

As I stood at the window snapping the pictures, he suddenly threw the truck into drive and took off, with the smaller of the two branches (which was still pretty long) sticking out of the side of the back of the cab.

I was pretty annoyed.  That tree is outside our bedroom window and I've watched it changing through the seasons every day that we've lived here... and I'm rather fond of it.

But I was more annoyed because he was on a residential street with plenty of little kids and he either didn't notice or didn't care to stop and even get out of his truck to look around (at least I never saw him on the side the damage was on) after hitting something as big as a tree.  Twice.

I went to the truck website and fired off an email with all the information I'd written down, to the trucking company.  They didn't have an email address on the website that I could find, but they did have a facebook page.  I resisted the temptation to post the picture I'd snapped on the facebook page and messaged them privately.

I looked out the window again about a half hour later and my alarm reached a whole new level.  There were flashing lights outside.  The power company was out there.  Cleaning up the tree?  I wondered.  I'll admit that a small part of my annoyance had come from the knowledge that we were going to have to figure out how to clean up the branch, because I'm fairly certain that the city isn't going to be doing it.

Then I saw the down line across the road, right next to the tree.  A power line?  I would guess not, since it must have been one of the lower lines and I've always thought those were phone or cable.  But does the power company fix phone or cable lines when they go down?

With the rain and the babies and the yellow duck slippers I had on I didn't make it outside before the truck pulled away, but I did send an email to the power company, explaining what I'd seen and telling them to contact me if they did need the information on the truck (maybe he actually called it in...).

So that was the excitement yesterday on our little residential corner...  I'm so glad that no one was hurt, either by the truck, or the tree, or the line that was down.
Posted by Cammie Diane at 8:15 AM