Was he sick?  Was he getting a new tooth?

Today he slept through his nap (exhaustion from a week without sleep?) and it somehow popped into my head that he might be afraid of the dark.  I found a light to plug in, and as I did so right before bedtime I noticed another cord.

The cord to his white noise machine.

Patrick has slept with that machine for most of his life.  There's also a huge fan going in the room all the time, to help drown out the sound of Mae jumping on her bed and moving furniture and carrying on at all hours of the night, so I hadn't noticed that during one of her double gate fence hops she'd come into his room and played with it and apparently turned it off.

I turned it back on and within five minutes Patrick had fallen asleep by himself.

That machine is worth it's weight in gold if it helps him sleep that soundly through the night.

I haven't seen a mouse in a couple weeks now.  I mentioned that fact to Paul and he pointed out that the calico cat from next door has pretty much adopted our house and is living in our back yard, right next to the part of the wall on the back side of the stove (where the mice always appear).

I feel like we need to send the cats owner a fruit basket.

The 13,983rd thing I love about living someplace that isn't tropical is that knitting doesn't make me feel depressed.  When I'd want to pick up my knitting needles when we lived in Florida I'd always feel a little sad because I knew there was no way anyone would be wearing anything that I made...  Now, as each day gets a little chillier, I am relishing picking up my knitting needles and casting on new projects: 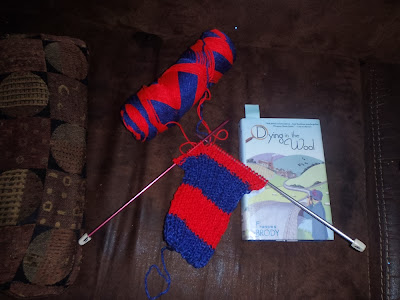 Yesterday I began the task of updating my blog roll after Paul pointed out that there was a blog on there that said it hadn't been updated in six years and "have you even being doing this for that long?" (no, no I have not... in reality most of the blog had been removed at some point of the last five years).  I began by deleting all the links that hadn't been updated in more than a year... but it's still a work in progress.

And there are a lot of blogs I read that aren't on there so... baby steps towards being a bit more organized on the blog roll front.

I wasn't able to stay awake until the end of the game last night... but:

And this is how we started out this morning.  I guess we'll be finding a way to bolt this apparently unbolted vent down this afternoon.

She pulled down the curtain and the jackets of the rack and moved the chair and I thought, "oh cute, she's making a fort"... and then I saw this.  It's one of the few vents that I haven't covered with a heavy (raised) piece of furniture for this very reason (the others are like two feet wide and a foot across and covered with these flimsy wood screens... and they scare me... so they're under a couch and a huge chest).  Apparently I was right to be concerned about the larger ones: 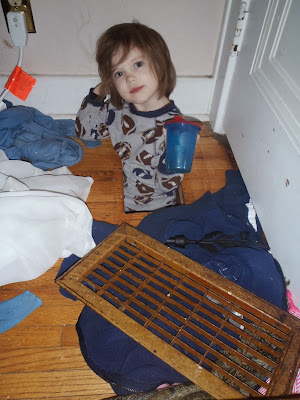 For more Quick Takes, visit Conversion Diary!
Posted by Cammie Diane at 9:39 AM