The Lady in the Checkout Line 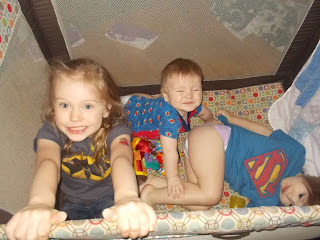 A few weeks ago I was standing in line at the grocery store when the woman behind me struck up a conversation about Patrick.  He was sitting happily, people watching, smiling at every person who glanced his way.  Paul had Sadie and Maggie in the cart in front of us, a strategy we employ often when we're out shopping, with Paul and the girls walking around looking at everything Meijer has to offer, while Patrick and I get down to the serious business of shopping.

After commenting on how happy Patrick was and how he must have just woken up from a nap (he hadn't, but I smiled, happy that she seemed happy to see a baby) she glanced over at Mae and Sadie and back at Patrick and added:  "But they certainly are close together, aren't they?"

I smiled and looked over at the girls who were watching Daddy load the bags into the cart.  Mae was doing surprisingly well, since making our way through the narrow candy shoot that leads to checkout is like running the gauntlet every single time we go to the store. 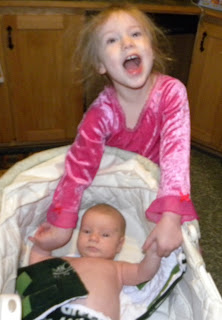 "Our oldest is five, and our next is three and then this little guy is ten months old."  I said with a smile.  "There are two years between each one."

"Yes.  Two years."  She replied.  "That is very close together."  I smiled, because it seemed like such a funny thing to say to some person you'd never met.

"It's great," I said, although the smile was beginning to feel slightly strained.  "They all play together."

"And fight," she said adamantly.  "They play when they're not all fighting."

I just continued to smile and decided to hold my peace.  I didn't need to say anything else.  She wasn't really listening.

A few moments later we were pushing our little trio out to the car.  And I laughed all the way there because if you could have heard the stress on the words "very close together" you might think that it was something rather horrible we'd done and really ought to be ashamed of, rather than having three joyful and at that moment in time, happy and well behaved, children.

Or maybe I'm just leaning more towards laughing these days when confronted with people who make rather rude observations to strangers, because oh-my-goodness, I thought they still taught manners in the 1950s and I'm pretty sure that publicly questioning strangers in a disapproving tone on their child spacing is a no-no. 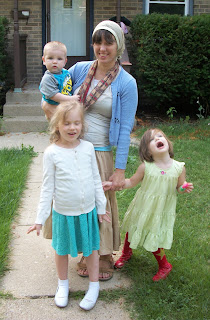 I didn't argue with her on the last point, because I doubted that she would have believed me.

Our kids don't fight.  They don't argue with each other.  Oh, maybe every other week Maggie pinches her sister if Sadie tries to boss her around, but it ends with the pinch and a talk about "giving your sister space" on the one hand and "not pinching" on the other.  And I have to say things like "Give your brother back his dinosaur.  He was playing with that first." and "It's your sisters turn to play with the water colors.  You can go next." which sometimes results in pouting, but in terms of conflict between them, that's usually the worst of it.  They're a pretty peaceful bunch.

I really hadn't given it much thought until her comment.  I guess it is unusual, at least in the pictures I've always seen painted of sibling interaction.  But they spend most of their days playing together and while we certainly have stressful moments and our share of difficulties, that particular issue hasn't been one of them.  Maybe it is because Mae is autistic.  Maybe it's because Sadie is so focused on "doing what God wants" (as she's said so many times) and maybe it's because she loves being the big sister and helping me with "the babies."  Maybe, in the future, they'll more than make up for it (oh I hope not!).

In the end, I can't but help feeling bad for someone who sees a group of smiling children and can't help but voice every pessimistic thought that pops into her head.  I can't help but feel sadness for a world that so often sees happy, smiling children, and somehow can't get past the idea that children are a burden who would change everything, without realizing that life is constantly changing, no matter how hard we try to pin it down and make sure everything is exactly as we like it.  And sometimes those changes, which seem so frightening are the ones that teach us the most and bring us the most joy when we finally open ourselves to the possibilities they bring and stop fighting to keep things the same.
Posted by Cammie Diane at 3:07 PM

Email ThisBlogThis!Share to TwitterShare to FacebookShare to Pinterest
Labels: family