I had a few snoods that I needed fabric for, so I ran out to JoAnn's earlier this week.  On my way to the checkout line I cut through an aisle and came across an entire row of fairy wings.  No way, I thought, looking at the $19.99 price.  Then I saw that they were on clearance for $5-something and I paused.  Sadie has been going through a Tinkerbell "Secret of the Wings" phase for a while now.  She loves Tinkerbell's sister Periwinkle and is constantly pretending to be the frost fairy.  And so I picked up a pair.  She spotted them in the car today and was on her very best behavior in hopes that she might get to wear them tonight.  Finally her wish came true: 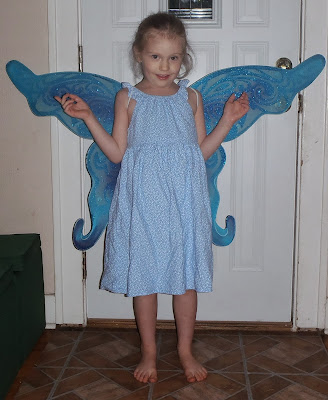 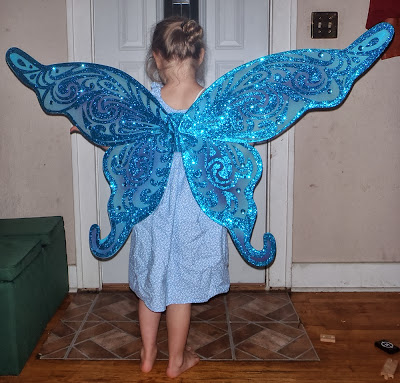 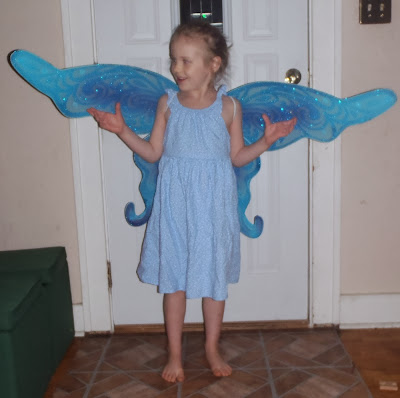 Apparently this was a find-deals-I-can't-pass-up shopping week.

Tonight we were at the store picking up foods that Mae can have to take to her testing tomorrow since we need to bring two treats she'll be excited about.  As we walked to the back of the store Paul pointed out a little pink chair that was on clearance.  My guess it was the floor model and they really, really wanted to get rid of it.

The timing couldn't have been more perfect, because Mae has recently discovered that she can tip Paul's very heavy rocking chair over, which was a disaster waiting to happen, and so it was moved downstairs.  That corner is Mae's favorite spot in the house, however, and so I was happy to be able to replace it with another chair she can sit in while looking at her books, or gazing out the window.

And Patrick's a fan of the new plan too: 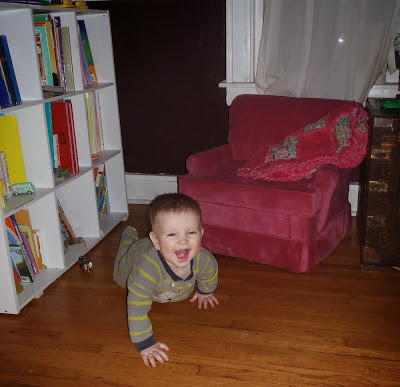 Tonight I got to work on making this glitter bottles for the kids (I like them so much that I'm thinking of saving them for Christmas because I think they are present-worthy).  They're bottles filled with glitter and glitter glue and water and when you shake them they swirl and look beautiful.  When you set them down they settle and separate out and they can be used for relaxation or to time time outs or just to gaze at because they're really, really pretty!

I made a pink one for Sadie, a purple one for Mae and a green one for Patrick.

But...  my normal clutziness came out while I was making them and in addition to a few glittery disasters involving the fine glitter, there was a glitter glue incident in which I couldn't get the top open on the glitter and I tried to pry it off while squeezing it...

That did not end well.  I managed to shoot glitter glue onto my dress, the couch and the floor.  I guess I'm lucky it didn't hit the ceiling.

However the finished bottles are definitely going to be well worth it: 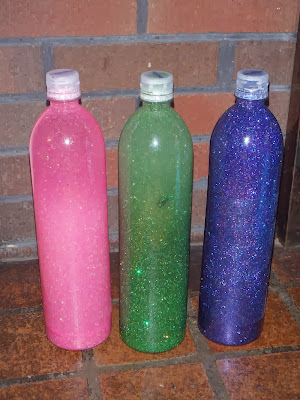 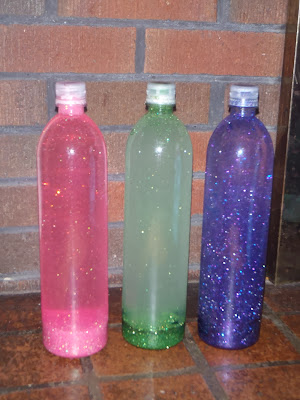 In the beginning we had one gate, which Mae easily hurtled every night after being put to bed.

We got a taller gate and she broke it.

We put the first gate back, hoping it would work until we found something new, and she broke that one too.

We replaced that one.

She jumped the new one. We put up a second gate above the first... and she broke that one also...

We found a gate we'd forgotten about in the basement that was sturdier and we installed that above the first one.

It worked for about a month... until she realized she could easily scale the five foot blockade and drop down on the other side.

Bed time was getting frustrating. It's hard to get Patrick to sleep in his room when I could hear Mae landing on the other side of the fence and then running into my room to find any sewing supplies that she might be able to reach.  I'd have to jump up and chase after her and an almost asleep Patrick would then be wide awake.

And even then I was often to slow.  Earlier this week I forgot to put a box of pins out of reach... it's not a mistake I'll make twice.

So finally I came up with yet another solution...  Three gates.  She can still get out if she kicks the bottom one hard enough... but if she does I'll hear the crash and after I put her to bed three of four times she usually finally stays there.  And so, this is the gate system of the moment.  Until she finds a new way to silently defeat it as well: 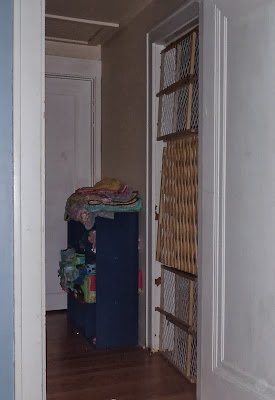