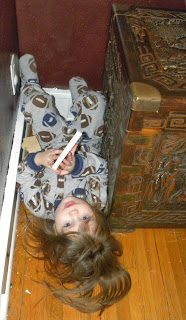 The other reaction I've found is from people who feel like they really know Mae and just cannot believe that she is autistic.  It might be from someone who knew Mae as a baby or who have heard about her antics from my facebook status updates.

And the knee jerk response seems to be that obviously she can't be autistic.  They've heard what she can do.  She's obviously smart.

Yes, I know that Mae is very, very intelligent.  She demonstrates it daily in her ability to come up with new and creative ways to get into trouble.  I hear it over and over again at her evaluations.  But that doesn't mean that she isn't autistic.  Being autistic doesn't mean a person is dumb, anymore than being neurotypical means that a person is smart.

The other possibility is that the parent in question might not share every single little challenge that they've faced with friends and family.  They might not feel like telling the world at large that they had to clean smeared feces off of every surface in their dining room after going into the kitchen to make lunch and finding the mess unfolding in the baby proofed room five minutes later.  They might not talk about trying hard to convince themselves that it was "just a phase" while simultaneously trying not to get sick during the extensive cleanup that followed (or in 27 other scenarios, when they're child somehow took advantage of being alone for thirty seconds while their mother went to the rest room). And yes, that particular challenge appears to be behind us now. 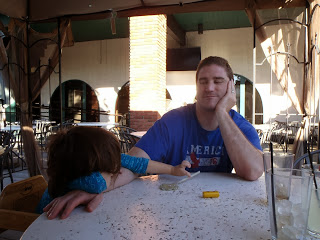 I tend to try to write about our cuter challenges.  I write about the challenges that make me laugh.  The ones that cause me to shake my head in amazement about the little firecracker that we've got on my hands.  I don't write about our toughest days, since I'm using all my energy getting through them (like yesterday when I had a migraine and someone kept trying to sit on my head when I tried to lay down and buy their silence with a Diego movie... which didn't work.).

And more and more I feel for those parents who's children are at other places in the spectrum... because the last thing anyone wants to hear when they're struggling to help their child is that their struggles are just in their imagination.

We know that something is really wrong (even if we've spent months or years denying it), we live with the challenges day in and day out.  To be honest realizing that something was happening that wasn't just in my head was a huge moment for me (and I imagine for many others walking in these same shoes). 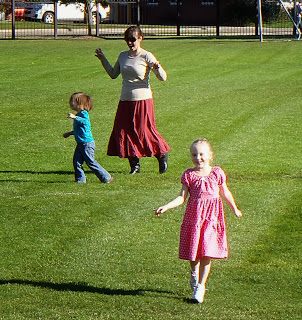 So here's my advice to those who have a friend who has a child on the spectrum, or with any challenge.  Try not to assume that you know every facet of the problem.  Try not to assume that you're an expert in the area unless you really are.  For some kids it is very obvious (Mae falls on the more obvious side right now).  For others it's far less so.

And whatever you do, please don't tell them a) that you don't believe in autism or aspergers b) that you don't believe anything is wrong with they're child that a few good spanks wouldn't cure or c) that autism or any of the other parts of the spectrums "aren't real."  You also might want to hold off on telling them that you think the vast majority of kids who receive the diagnosis aren't really autistic at all.

And for anyone who's still reading, and who's wondering what they should say if any of the above was your go to response, a nice place to start instead might be by asking them how they're doing.  If they've just received a diagnosis their lives likely feel chaotic.  They might not have a blog where they vent their every thought.

And then actually listen to what they say.  You might learn something that you didn't know before and even if you don't you may have lightened their load a tiny bit, rather than having added to it by telling them that the challenges they're facing are all in their head.
Posted by Cammie Diane at 9:54 AM